This fall has been an incredible one for winter finches across the eastern part of the continent.  Birders in New England and the Mid-Atlantic have been reporting Evening Grosbeaks in numbers for the past month, and along with both redpolls, Pine Grosbeaks, and both crossbills it’s already looking like one for the history books… er…status and distribution guides.  We down in the south have been waiting with bated breath for reports of finches in our own backyard, and being as it’s only November the odds are looking good.  Evening Grosbeaks have been reported flying overhead across the state (even practically in my backyard), a couple Common Redpolls made the listserv, and a trio of White-winged Crossbills spend a few days at a botanical garden on North Carolina’s coast, the first such sightings in decades down here.  I have been neither lucky enough to find finches around my own home or free enough to chase them far afield, but I have high hopes that by February, the anxiety I feel from straining for winter finch flight calls every time I’m outdoors will be but a distant memory.  I have a feeling that the birds will come, and I will laugh about how hard I tried to turn one up back in November.

What we have been seeing in impressive numbers this year, however, have been those most common of winter finches, the Pine Siskins.  They are everywhere, in large flocks, as singletons, among American Goldfinches and in single-species flocks.  I’ve become somewhat accustomed to hearing the small flock in my neighborhood as I back my kid in the car for school, and every local patch I bird hosts a resident flock this winter.  If I never see another winter finch this season (and let’s be clear, that is a very worst case scenario), I suppose I can be comfortable with this epic Siskin year. Unlike the other, more “exciting” winter finches, siskins are something of a regular visitor around here.  Granted the numbers this fall have been exceptional, but for a bird considered to be one of the irruptive species it seems to me that we’ve had more siskin years than not in the last half-decade.  That’s fine by me.  Despite their voracious appetite for expensive niger thistle, they’re pleasant to have around.  The tight flocks and their boisterous nature is a welcome change from the laid-back feeder birds that populate a typical North Carolina winter.  Heck, our most notable feeder denizen, the southeastern specialty Brown-headed Nuthatch, is well-known for their exceptional attention to feeder equity, taking turns when a family group arrives.

These siskins, with their aggressive posturing and belligerent attitude, are exactly like every southerner’s worst ideal of Yankee usurpers.  As someone amazed by the average southerners ability to deploy weapons-grade passive-aggressiveness (bless their hearts), this is not such a bad thing to observe from time to time.  We are all occasionally guilty of seeing birds as windows into human , and we could do worse than the confident Pine Siskin. Unlike the other winter finches, which come and go quickly and with little warning, Pine Siskins have an interesting tendency to stick around so long as there’s food to be had.  One of the most fascinating results of the last siskin invasion year, only four years ago in 2008-09, was the discovery of a successful Pine Siskin nest in Wake County in the Piedmont region of the state (i.e. not in the mountains, where they’ve been known to nest sporadically in the past) in May of that year.   Apparently the finches decided they didn’t need to return to Canada that year and simply fledged young in North Carolina.  Given the numbers currently in the state, we may see a repeat performance next spring.

If only the other winter finches were so willing to make themselves at home. 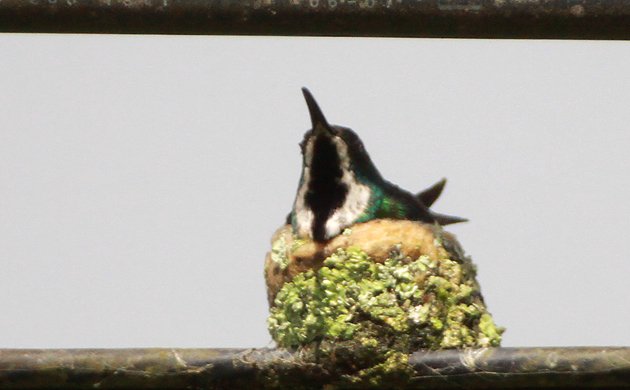 (Humming) Bird (Nest) on a Wire