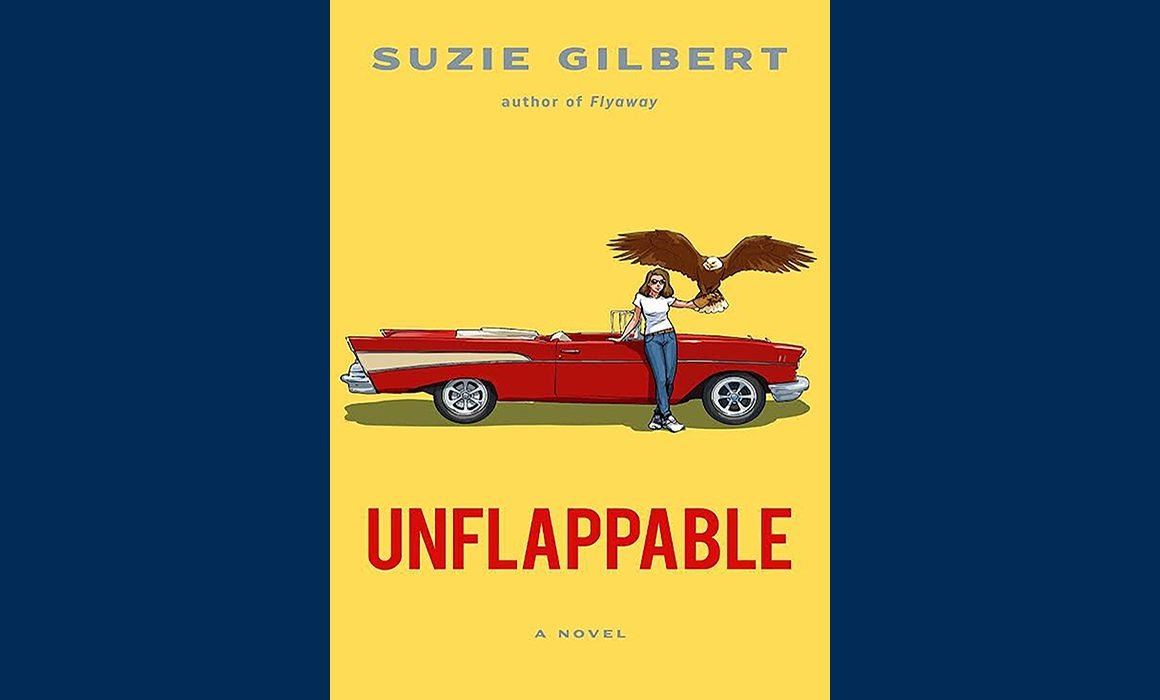 Suzie Gilbert has once again ventured into new territory and written a novel–a crazy road trip adventure entitled Unflappable. Faithful 10,000 Birds readers will remember Suzie as our wildlife rehabilitation beat writer. (And, if you’re a more recent fan, you can read some of her classic posts; the links are below). Suzie wrote about her experiences as a bird rehabber in Flyaway: How A Wild Bird Rehabber Sought Adventure and Found Her Wings (2009) and used those experiences as the source for her fictional children’s book, Hawk Hill (1996). In Unflappable, Suzie again applies her rehabber expertise–both of the creatures themselves and the network of people who care and protect them–and her imaginative talents to a genre not usually represented in the birding world (actually, not ever to my knowledge–we have birding mysteries but I don’t know of any bird-related comic novels, let me know if you do in the comments).

I had a lot of questions about Suzie’s new book, and she wanted to say hello to everyone in the 10,000 Birds world, so we collaborated on this interview. Suzie tells us about her novel, her favorite nature authors, and she gives us insight into what’s involved in writing and publishing a book. (Because, I know some of you are wondering if this is the time to write that novel or birding narrative you’ve had on your bucket list, if you only had the time.) A fortunate coincidence that Unflappable has come out at the exact time we’re hungry for good bird books to read! 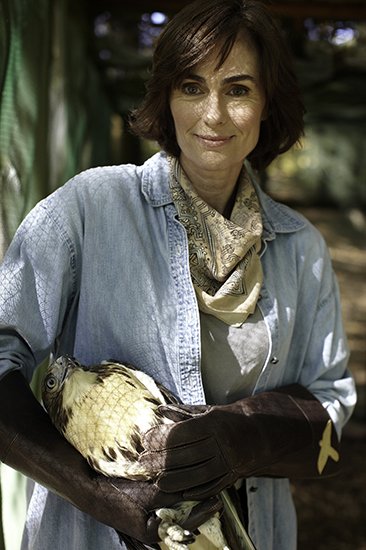 Without giving too much away, what is Unflappable about?

Twenty-five-year-old Luna Burke is risking everything to smuggle a homicidal Bald Eagle out of her husband’s private zoo in Florida, reunite the bird with its mate, and get them both to an eagle sanctuary in Canada. Trying to stop her is her furious husband and the authorities, and helping her is a smitten tech guy and an underground railroad of fellow wildlife rescuers. It’s a funny, suspenseful road trip with lots of wildlife. And birders!

How did you come up with the idea for the book?

I told my agent, the great Russell Galen, a funny rehabber story and he said, “If I were a movie producer, I’d be all over that. Why don’t you write it as a novel?” I said, “Because I don’t know how to write a novel.” He said, “Figure it out. Read Carl Hiaasen.”

How much did you draw on your own experiences as a wildlife rehabber to tell Luna’s story?

A lot. But I only rehabbed birds, so I had to do research and call my mammal rehabber friends. I didn’t know the set up required for a black bear, or how high a Florida panther can actually jump.

Not actively – unfortunately! I moved and no longer have facilities. I do occasional rescues, though, because everyone still has my number. I can run but I can’t hide.

Your posts for 10,000 Birds took us into the unique world of wildlife rehabilitation. Looking back, do you have a favorite?

My favorites were the rehabber vent-fests. I’d post a question like this on Facebook: “What was the weirdest thing a finder ever fed the bird they brought you?” My page would explode. Everyone cracked each other up. Rehabbers are always overworked and overstressed, and these provided such fun moments of solidarity. Some of the results were Do Not Feed Baby Birds Ham, Wildlife Rehabber Misidentification, Wildlife Rehabber Slang, Wildlife Rehabber Slang (Part 2), Birds And Bling, and Birds As Bling.

Unflappable has two main characters on an urgent road trip – Luna Burke, a wildlife rehabber, and a Bald Eagle name Mars. Was there a role model for Mars? Have you had rehab experiences with eagles?

I’ve only handled a couple of eagles, and they were awesome birds! But Mars’s character is less about being an eagle and more about the fact that he was stolen from his nest, raised in captivity, and now considers almost all of mankind – except Luna – to be his enemy. I’ve worked with birds like that. Mars is a very big, homicidal raptor, and the young tech guy who ends up helping Luna is afraid of birds.

As she travels north, Luna relies on help from an underground network of wildlife rehabbers. Is this a real thing?

The story of smuggling an eagle to Canada is fiction, as it would be far too stressful even for a bird used to being around people. The rehabber connection, though, is very real. We’re all connected through email and listservs, and we all swap information and provide each other with moral support. Just like Luna, I’ve never met some of my best rehabber friends in person.

The book is darkly funny. Why did you decide it was important to find humor in Luna’s experience?

I can’t write stories that are unrelentingly grim. I just can’t take it. I come from a family where the worse the situation, the faster and more furiously the wisecracks fly, so I suppose I’m hardwired to look for humor. I certainly don’t make light of a bad experience, but I do alternate between comedy and tragedy, and look for those small beams of light.

Do you have a favorite quote or scene from the book? Something you just had fun writing?

I always have fun writing comic scenes, especially with characters like Warren and Wizzie. I love when characters just do what they do and exasperate everyone around them. My favorite quote wasn’t comic, though. It was when Hélène says to Ned, “And when the stakes were the highest, you raised an eagle on your glove.”

Can you share your most memorable experience as a wildlife rehabber?

There are so many! But one in particular did not even involve contact with an animal. It was the first time I went to a wildlife rehabilitators conference. I walked into an enormous dining area filled with rehabbers, and they were all eating lasagna and talking about the kind of animal medical issues that would send most people running from the room. I thought, “Finally! I’ve found my tribe!” 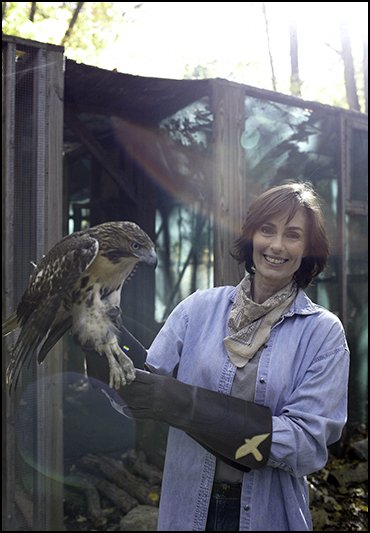 You’ve now published a memoir, a children’s book, and an adult novel. They are such different genres, but they are also unmistakably Suzie Gilbert books. What connects them?

The love of wildlife and the outdoors, and the themes of hope, resiliency, and making unexpected connections with other people.

How would you describe your writing style?

You’ve published with major trade houses, but you’ve brought Unflappable out as a self-published novel. What was that process like?

Hell on wheels! I’m not a computer person and not that great on social media, and self-publishing requires an enormous amount of both. Early on I hired a publicist, Jessica Pellien, who was (and continues to be) a godsend and my guiding light. The good thing about self-publishing is I’m my own boss.

Many of us are now working from home, something you’ve been doing for years. How and where did you write Unflappable? Any suggestions for those of us who are easily distracted?

When I decided to write Unflappable, I was single and lived in an old house in the woods. I was sure I could cut back on my freelance work and toss a novel off in a year. Not! It took four different drafts and nearly two and a half years. I did nothing but write and take long solo hikes while I tried to figure out the plot. I saw other people once or twice a week…if that. I was trying to stretch out my savings, so I barely turned on the lights and in the winter kept the heat to 60 degrees. Occasionally I’d drink way too much vodka and write my long-suffering agent long diatribes with the subject line SHALL I TELL YOU HOW MUCH I HATE BEING A WRITER??? So I can’t tell you how not to be distracted, but I’d sure like someone to tell me how not to be obsessive. And don’t forget, I’m the one coming out of solitude and ready to rejoin humanity in March of 2020.

What titles and/or authors on wildlife do you recommend to 10,000 Birds readers?

The iconic Ted Williams: Cool Green Science  – Native Fish Coalition –  Audubon –  Muckrack – Recent Conservation Columns (I’m waiting for the expanded paperback version of his Wild Moments/Earth Almanac essays to come out in April. [author’s note: Earth Almanac: A Year of Witnessing the Wild, from the Call of the Loon to the Journey of the Gray Whale by Ted Williams, is due out in late April, published by Storey Publ.]) I love all of Sy Montgomery‘s fabulous wildlife adventures. The Wild Trees boggled my mind. And of course, Carl Hiaasen, who unintentionally taught me how to write a novel. 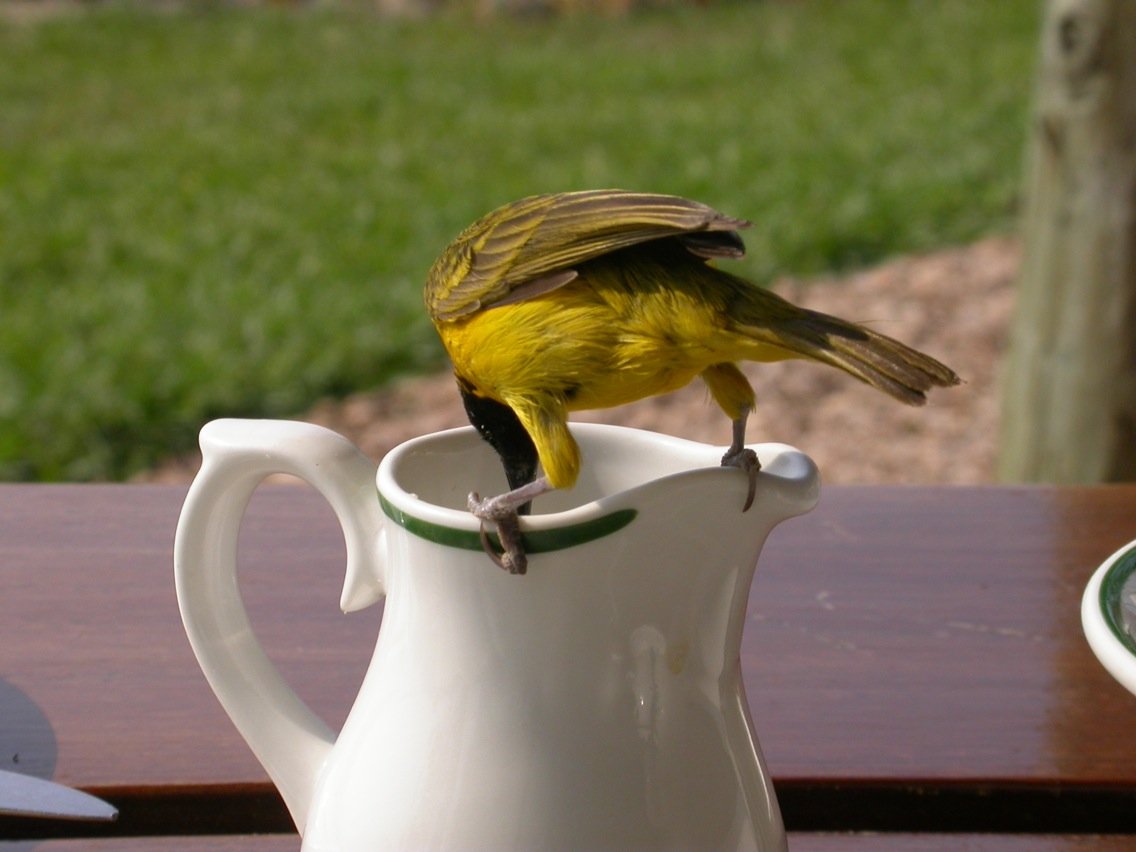 Best Bird of the Weekend (First of December 2009)