When I got home from birding Jamaica Bay this morning I was greeted by an odd email off the ebirdsNYC listserv.  A rail, unidentified to species, but with a link to pictures taken by the finder, had been found in a vacant lot on the east side of Manhattan.  It was a Virginia Rail!  In Manhattan!  So of course I went off to see it (it’s a good thing Daisy was studying)!

Two trains and walk across the east side later I was on the scene.  The bird was relatively easy to find, only about six inches from the sidewalk but behind a seven-foot high chain-link fence.  Unfortunately, I could see that one eye was shut and the bird did not open that eye at all.  That, coupled with the fact that Virginia Rails don’t normally stand still when one is less than a foot away made me think that the bird was injured, probably from flying into a building.

What else could I do but call around to the birders I know and try to track down a wildlife rehabilitator?  I managed to get a name but not a phone number so I called 411 and got the number.  After a kind of convoluted conversation (my cell phone’s 518 area code had her convinced I was in Albany) the federally-permitted wildlife rehabber agreed to come down to the site and see what was up.  In the meantime, a couple of other birders arrived and enjoyed the same close-up views that I did. Upon the rehabber’s (she would like to remain anonymous) arrival she agreed that the bird should be captured, which, considering it was behind that aforementioned fence, was not going to be easy.  She briefly trained me in the art of netting a wild bird and getting it out of the net into a bag.  So I climbed the fence some distance from the bird (on its blind side) with a paper grocery bag tucked into my jeans and once I got over the fence the rehabber passed over the net, which resembled a butterfly net.

The most difficult part ended up being handing the paper bag with the rail in it over the fence without tipping it over or letting the rail out of the bag.  We managed though, and I didn’t even rip my pants climbing back over the fence.  Once I was back over we all walked to a bench where the rehabber took the bird out of the bag and gave it a quick examination, which revealed the right eye was severely swollen with blood visible behind the eye, and some feathers were missing from where the bill meets the forehead, which is probably where the bird hit a building.  Next up was applying a saline solution to the eyes and forehead to clean them, which she did quickly and carefully.  After that there wasn’t much to do besides head home, but not before we heard some cool stories about other Virginia Rails that the rehabber had rescued (apparently they turn up in New York City more than one might think).

Next up for the rail will be hydration and trying to get it to eat.  As soon as I hear how the rail is doing I’ll post an update…

This post has been submitted to Bird Photography Weekly #6.  Go check it out! 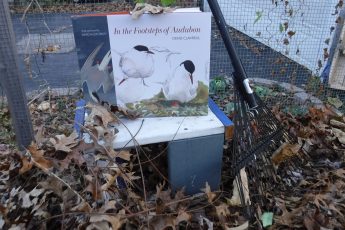 Midsummer's Bird and Some Thoughts on Naming