Welcome Wednesday: On Yer Bike – Birding with a Sketchbook

Alison Kent, also known as Pica, works as a designer, writer, and editor at the UC Davis Wildlife Health Center. She has been posting a sketch of a bird (almost) every day since August 2007 on Bird by Bird. She also has another blog which she shares with her partner Allan, also known as Numenius, which is not primarily about sketching birds: Feathers of Hope. They live in Davis, California, where they own more bicycles than is quite right. Little known fact: Alison was part of the very first I and the Bird.

“”It’s letting up,” said Vance, a tall bike racer from the midwest who works for California Audubon and who has recently been honing his birding skills HARD. We were heading into the storm toward the foothills and the promise of Barrow’s goldeneye, pileated woodpecker, and white-throated sparrow, all birds we needed for our Bigby lists on this Martin Luther King Day in 2008. I wanted to break 100 species for the year from the bike. We all had various increments of lycra on or about our person.

(I regretted leaving my rain pants at home.)

I’m the stoker on a tandem. (We are not , unlike Vance, racers.) Stoker means the person on the back, the bell-ringer, and oh by the way the one who gets to do most of the birding (“oh, look, there’s a lark sparrow on the right!” “did you see the turkeys?” — my poor mate, AKA the tandem captain, just groans). I can hunker down behind Allan’s back and miss most of the rain, though. And I do, now.

We got to the sparrow spot, fifteen miles west of home in the rain. No white-throated, though a beautiful if soggy sooty fox sparrow teed up for us just as I slipped almost onto my face in the mud, mud that would cover most of California in about 45 minutes. The hooded mergansers were on the water, just in front of the Wilson’s snipe and yellowlegs I cannot quite call a lesser because my Leica Duovids were steamed up and coated in water (and, it has to be said, mud). Drenched, we plodded west.

(I was starting to get cold.)

There were cyclists emerging from the hills and high-tailing it back to Davis, bicycle capital of the United States, because it was Raining. They looked at these dripping, crazy people with very expensive optics (and at least one very expensive bike). They shook their heads, just as the local ostrich shook its head as we rounded the corner onto Pleasants Valley Road.

It all seems too much, till I think about the Boothroyds.

These are the people, in case you haven’t heard of them, who have cycled from Whitehorse, Yukon, to Florida via Arizona, and who aren’t done yet. They are doing a birding big year. By bicycle. (Total to date: 445 birds.) They have cycled through snow, hail, rain, wind, and over SIX THOUSAND MILES. I shudder, and I look at the next minor incline. These guys braved tornadoes, I think. You can get up this hill, girl.

The Bigby was started in Montreal by Richard who, inspired by these same Boothroyds, has decided to try and get the birding world to inflict less of a carbon footprint on the planet while we pursue our hobby. There are Bigby participants from at least 11 countries. Californians have it easy compared to Montrealers, of course, and our Bigby lists are correspondingly rotund (wait till summer, though, when most of our birds estivate in the parched Central Valley; we’ll be three months at least with no new birds).

What does this mean, though, to discover birds afresh from your bike? I am three birds shy of 700 on my ABA list. Most of them, I’ll admit a little red-facedly, were not the result of my skill or hard work or study, but found for me by others, either in person or through the miracle of the internet. I have finally rebelled against this and decided, last August, to start sketching a bird a day. My drawing skills are rudimentary, but I knew that if I did it every day, I’d get better. I also knew that if I committed to posting a sketch a day on a blog, I’d better sketch at least a bird a day. I’d be accountable. The birds I see, every day, but seen with new eyes and with a pen in my hand. I’m starting to learn new things about birds. I have also learned to deal with the fact that some of my “bird of the day” offerings are miserable, but they are there. Warts and all. (A one-day workshop with John Muir Laws in December was a great breakthrough in terms of understanding how bird wings work and what the feathers around them do.)

Then came the Bigby. I started bringing a small sketchbook along on the bike, wherever I went, including to work (I bike to work). We don’t always bird on the tandem, we have other bikes: but going slowly enough to see the color of the burrowing owl’s eyes by the side of the road, for instance, made me realize just how much I’d been missing. Today I saw a red-breasted nuthatch on a phone pole for two? three? seconds, but I saw it differently than I did ten years ago. I saw lines, stance, color, set, go. It was magic.

I have nothing against digiscoping. Some of my best friends are digiscopers, in fact. I love to see their photos and revel in a great shot of a rarity. But for me, capturing the outline of a crow in flight — downwind, wings a little tucked — is like a holy grail. The pen caresses the feathers; is the tail fanned or straight? Is the head protruding or not? — and do juncos have two or three outer white tail feathers? Is their head round or sort of flattened? What color is the eye? What color is the eye at 30 feet, with no optics? (This is the way Keith Hansen says Dave Sibley drew all the birds for his field guide or he’d never have finished it.) It takes me into a realm that is well beyond a check in a box. It is, really, about inhaling the bird, making it part of me, learning it. I will never forget the way the feathers on a snow goose’s neck swirl in a half-spiral, because I studied snow geese for three weeks like a rabid thing for an illustration assignment 15 years ago at the Massachusetts College of Art. It’s imprinted on my brain.

From the bike, though, I have it all. (Snow geese, overhead, oh, there’s a Ross’s in with them! No! Two! Near the front! Groan, says Allan.) I have the mobility, the basket to schlep my sketching gear and my fantastic new tiny Nikon 50mm ED scope, the illusion of flight, and above all the most efficient mode of transport ever devised by human ingenuity. It’s perfect.

Try it; you’ll like it. But don’t forget your sketchpad!

—
Welcome Wednesday is that special day of the week where we invite you to share your insight, excitement, and angst about issues pertaining to wild birds and birding. If you’ve got something important to say, 10,000 Birds can be your soapbox. If you think reading about birds and birding and everything that goes with them is fun, imagine writing about your favorite topic! Whether Welcome Wednesday inspires you to write about conservation, a first encounter with a particular bird, your favorite birding spot, or anything else related to our free-flying feathered friends, feel free to contact us about writing a Welcome Wednesday. 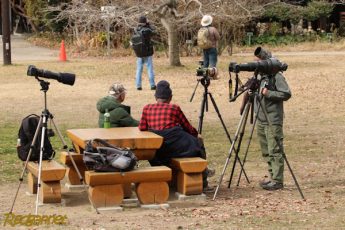