What is the State Bird of South Carolina?

September 15, 2015 by Erika Zambello No Comments 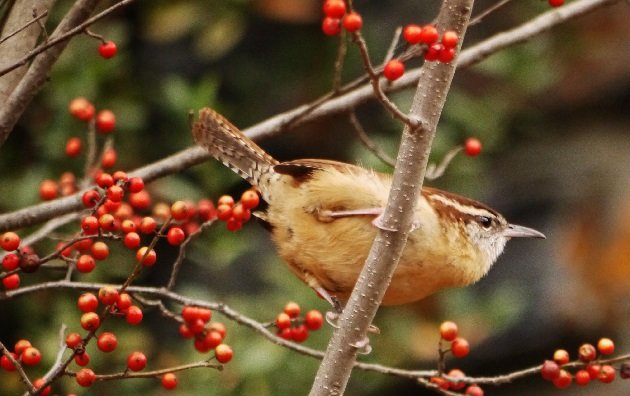 If you live in the eastern United States, chances are you’re familiar with the clear, loud, teakettle teakettle teakettle song that reverberates through woods and thickets. This unique sound belongs to the Carolina Wren, who unsurprisingly is the state bird of South Carolina!

Adopted as the state bird in 1948, the Carolina Wren actually superseded another species: the Northern Mockingbird. In fact, the legislation further stipulated that “Any one (sic) intentionally killing the Carolina Wren or the Mocking Bird in the state of South Carolina shall, upon conviction, be deemed guilty of a misdemeanor and shall be punishable by a fine of not more than One Hundred ($100.00) Dollars or be imprisoned for not more than thirty (30) days.” Those lawmakers took bird protection seriously!

Carolina Wrens are impressive little birds. Though only around five inches long and weighing less than an ounce, one male in captivity sang 3,000 times in one day – that’s a lot of energy! Still, it’s important to note that when you hear the loud song of a wren, you are hearing the male; unlike other wren species, only males sing with high volume. Once bonded, males and females often remain together for life.

This species is also known for ground foraging, and actually are poor fliers. To make up for it, they speedily run along the ground or up onto tree trunks or branches, almost giving the illusion of flight. Because they prefer to nest in cavities a few feet off the ground, Carolina Wrens will nest in special nest boxes if you are so inclined to have a breeding pair in your yard. Be careful though, I’ve seen a pair of Carolina Wrens bypass a beautiful nest box in order to lay their eggs in a newspaper mailbox!

The population of Carolina Wrens is increasing, and as temperatures rise their range is gradually pushing northward. The global breeding population is around 14 million birds, and the wrens continue to benefit from scrubby habitat caused by forest regeneration, as well as the increase in bird feeders. I’m happy to write that this scrappy species is doing very well, and birders who hope to catch a glimpse of their brown and gold bodies should look along forest floors, thickets, swamps, ravines, and even backyards.