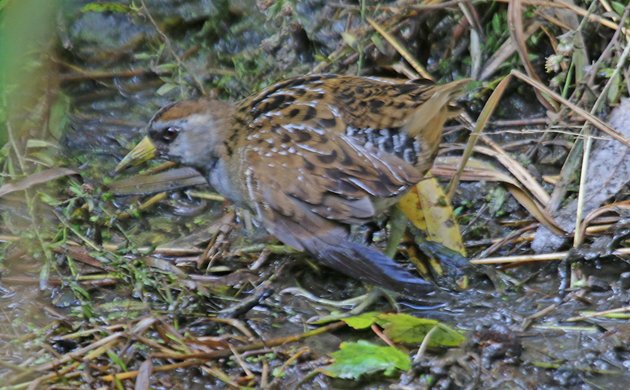 When a Sora was found in the Loch in New York City’s Central Park almost a week ago birders were pretty happy. After all, a twitchable Sora in Manhattan is an oddity with the only previous really twitchable bird being the one that showed up in Bryant Park two years ago. But exhilaration turned, to some degree, to dismay, when it was realized that this Sora had a broken left wing, as you can see in the above image.

In order to migrate the bird will need to fly. This bird can not fly and therefore can not migrate. And while a Sora in winter in New York State is not unprecedented, such occurrences are few and far between, mostly because their preferred wetland habitats freeze over in all but the mildest winters.

Discussion about trying to catch the bird and get it to a rehabilitator has started on the local listserv but the bird’s apparent health and vigor (other than its broken wing) has made the point kind of moot at this point. After all, you can’t rehabilitate a bird if you can’t catch it! But if the bird is left to its own devices it seems likely that the wing, which might be beyond repair already, might get worse. And once winter comes, this bird is likely doomed unless we get an amazingly mild season.

So, what do you do with a Sora that is seriously injured? For now, birders have mostly been looking at and taking pictures of it. That’s what I did on Sunday afternoon. What do you think should be done?

« Previous post
What is the State Bird of Hawaii?
Next post »
Best Bird of the Weekend (Fourth of October 2015)