Last week I introduced you to the magnificent sight of thousands of shorebirds roosting on Reddell Beach at high tide at this time of year before they head north on migration. In Broome our lives evolve around the tides when considering any coastal activity, because our tides are some of the largest in the southern hemisphere. If you don’t check the tide chart before you head out you may be surprised to find the ocean is nowhere near the top of the beach! The difference between a high and low tide can be almost ten metres some days and when you consider this is a vertical measure on a mostly flat area there is a lot of sand and mud exposed when the tide goes out. The 2016 tide chart is also useful if you want to see the dinosaur footprints at Gantheaume Point, because you need the tide to be below 2.16m for them to be visible and due care is required over slippery rocks. Venturing out only on the outgoing tide is advisable, so you can explore at your leisure and not have the incoming tide chase you back in. I will also give you the link here for 2017 in case you are reading this next year or want to plan a trip for next year!

On Thursday 7th April the tide was too high at 10:35am at 9.59m for the shorebirds to roost on Reddell Beach due to the proximity of the cliffs and so the shorebirds needed to find an alternate roost and their two favoured areas at this time of year are Gantheaume Point and Cable Beach. The following day the tide was 10.16m at 11:08am followed by 10.48m at 11:42am on Saturday and 10.5m at 12:16pm on Sunday. The night time tides are not quite as high in this series, but the shorebirds will still roost on Cable Beach. It is a very popular roost with migratory shorebirds, because it is relatively undisturbed and very few threats. We have seen Peregrine Falcons fly through circling flocks of shorebirds and Brown Goshawks attempt a kill, but generally they are able to escape by their constant circling. From our experience the greatest risk is when the shorebirds take off in a panic flight and clip each other’s wings and several fall into the sea. At this time they are extremely vulnerable as they attempt to get out of the water either by flying or even swimming to shore.

The shorebirds are heavily camouflaged on the rocks at Gantheaume Point and it is easy for people to wander across the rocks and have no idea that they are present. They do not take off in a sudden panic flight in this situation, but take flight briefly and return to shore when they feel it is safe to do so. This may only be a minute in the air and they may even land closer to other people in some situations. The shorebirds are a lot more relaxed after the tide has turned and I would always recommend visiting a shorebird roost after the tide has turned to avoid disturbing them unnecessarily. During the incoming tide the shorebirds are constantly moving as the water pushes them closer and closer to the cliffs or dunes and they are not relaxed. In the photo above it hardly looks like there is anything other than rocks and a few Silver Gulls. A selection of shorebirds, Silver Gulls and terns among the rocks

The majority of the shorebirds are Grey-tailed Tattlers, Terek Sandpipers, Red-necked Stint, Red Knot, Great Knot, Whimbrel, Curlew Sandpipers, Common Sandpipers, Greater Sand Plovers and Lesser Sand Plovers. Some of the Grey-tailed Tattlers have managed to find some shade from the 39c (102f) temperature under the large rock, but mostly the birds are relying on the cooler temperature on the wet sand and rocks after the tide has dropped. The terns that were present were Common Terns, Crested Terns, Lesser Crested Terns, Whiskered Terns and Little Terns. Both the grey morph and white morph of the Eastern Reef Egret were present and also ten Sooty Oystercatchers and our pair of Pied Oystercatchers that breed a few kilometres to the north of Gantheaume Point each year from July. The darker rocks are also very good at camouflaging the presence of shorebirds and often people wonder what we are looking at, because from a distance there does not appear to be anything! A closer look at the rocks! An even closer look at the rocks! Note the red Red Knot!

All of the rocky areas are covered in shorebirds and it is very easy to see why they are not easily observed without looking a bit closer! Most of the Red Knot are in very good breeding plumage now and they do stand out very well on the grey rocks. There are two sub species of Red Knot here and the piersmai sub species is a much darker red colour than the rogersi sub species and easily identified in breeding plumage. The Red Knot are some of the latest shorebirds to leave the Broome area and have been recorded leaving on migration until mid-May. A closer look at the rocks An even closer look! Red Knot stand out and even a Silver Gull head on the right!

Looking towards Cable Beach it is easier to see the outline of the shorebirds perched on the rocks as the tide drops, but it is of no surprise that many people do not notice their presence. A distinct difference at this time of year to other times of year when the migratory shorebirds are here is the urgent need to feed as soon as the tide has dropped enough to expose the sand or mud-flats. Within moments of the tide dropping enough to expose the sand the Great Knot and Red Knot are at the tide line. They feed ferociously and running as they get caught out by the occasional wave. The shorebirds need to consume as much as they can before they set off north with their next stop likely to be several days later in Taiwan or China. The Grey-tailed Tattler continue to change into their breeding plumage with the tiny zig-zags forming in their plumage pattern and each day we search for our Taiwanese flagged Grey-tailed Tattler “35”. We first encountered Grey-tailed Tattler “35” in 2012 and you can see the history of this travelling shorebird here. Soon it will go north and then we anxiously await its return later this year!  The Terek Sandpiper flagged in Japan was also present on the rocks! Urgent need to feed once the tide turns!

If you get a chance to visit Gantheaume Point then be mindful that all those rocks may not be rocks! There may well be several thousand shorebirds roosting quietly waiting for the tide to turn, so they can continue to feed and then head north to breed thousands of kilometres from Broome. We wish them all a safe journey and hope to see them return alongside juvenile birds later in the year. 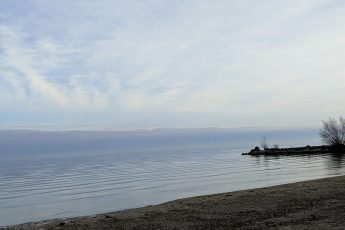