The Yellow-rumped Warbler (Setophaga coronata) complex is one of the most abundant and widespread representatives of the New World warbler family in North America, present in many parts of the United States even through the winter months, when the birds feed on small fruits and other foods, including sap. There are four generally recognized groups within the complex, “Myrtle” (coronata) of eastern and northern North America, “Audubon’s” (auduboni) of the western United States and western Canada, “Black-fronted” (nigrifrons) of Mexico, and “Goldman’s” (goldmani) of Guatemala. The photo above is a breeding-plumaged Myrtle Warbler by Kelly Colgan Azar.

A thread on BirdChat two weeks ago reminded me of a fascinating paper that went up online last fall and was published in the January 2014 issue of Evolution: Migration, mitochondria, and the Yellow-rumped Warbler (Toews et al.). In it, the authors explore an intriguing phenomenon: Audubon’s Warblers in the northern part of their range have nuclear DNA (and physical appearance) consistent with an Audubon’s-Black-fronted warbler clade, but their mitochondrial DNA is consistent with Myrtle Warbler. Write the authors:

Near the border of Utah and Arizona there is a transition to a second, deeply divergent mitochondrial DNA clade (Brelsford et al. 2011), which was previously assumed to be geographically restricted to Mexico in the black-fronted warbler. This cryptic transition occurs within what are otherwise phenotypically and morphologically Audubon’s warblers (Brelsford et al. 2011; Milá et al. 2011) and where there is no observed break in nuclear markers across this zone.

Previous authors had speculated that perhaps northern populations of Audubon’s Warbler are more strongly migratory than their southern counterparts and thus needed the migratory Myrtle Warbler mitochondrial DNA to help them fly the long distances required of migratory birds. (Remember, mitochondrial DNA is generally passed directly from female parent to offspring without being mixed with the male parent’s DNA, and mitochondria are responsible for producing energy that cells — like flight muscle cells — use.)

So Toews et al. set out to test this hypothesis, and they looked at where the transition between mtDNA types occurs, how far Audubon’s Warblers at various latitudes tend to migrate (by examining isotopes in feathers grown on summer and winter territories), and whether in fact the mitochondria of Audubon’s Warblers with Myrtle Warbler DNA are more efficient energy producers.

In short, what they found in the distribution of mtDNA types, the migratory behaviors of the birds, the geographical alignment of these two characteristics, and the function of the mitochondria themselves supports the hypothesis:

We suggest that data presented here are consistent with the migration-adapted mitochondrion hypothesis. However, given the correlative nature of this study, other processes, including stochastic shifts in the frequency and distribution of mtDNA that may have produced this mtDNA-nuDNA discordance (and any correlated phenotypic differences), should not be excluded. So what does all this mean — if anything — for how the birds are split or lumped at the species level?

The AOU lumped everything into “Yellow-rumped Warbler” (Dendroica coronata) in 1973 and most recently reconsidered the complex in 2010 (see Proposal 2010-A-4) but voted 7-4 to maintain the status quo.

The reasons given by “no” voters centered on a hybrid zone between Myrtle and Audubon’s warblers in the Canadian Rockies (in which, apparently, birds of both types freely interbreed) and on the fact that the research into the complex was still ongoing. Some “no” voters expressed opinions that a split will eventually occur but that they wanted to wait for more data, which is typical of the usually very conservative AOU NACC.

What about the objections over the non-assortative mating in the Audubon-Myrtle contact zone? Well, Toews et al. (echoing others) offered this opinion: “The narrowness of that hybrid zone [132 kilometers or 82 miles] in the Rockies suggests that there is moderately strong selection against hybrids (Brelsford and Irwin 2009).” If they are right, then there apparently aren’t prezygotic barriers (e.g., social, physical, genetic) to hybridization, but there apparently are postzygotic barriers that make the hybrid offspring less fit or desirable in some way, keeping the hybrid zone narrow and stable, as is the case in many other North American species pairs, from titmice to chickadees to rails. Why should we treat Myrtle and Audubon’s warblers differently than we treat, say, Carolina and Black-capped chickadees, which also have a narrow, stable hybrid zone?

Ah, you may be thinking, but does the mitochondrial DNA situation put a hole in that theory? Not so fast. Here’s Shai Mitra, weighing in on the Toews et al. paper in that BirdChat thread I mentioned:

Every now and then hybridization will make available a trait that is adaptive within the new population, and in such a case, this trait should increase in frequency and might even become fixed (e.g., the Myrtle mitochondrial genome in some populations of Audubon’s Warbler). Consider what this means: that EVERY Audubon’s Warbler in such a population has at least one Myrtle Warbler ancestor. This does not make them Myrtle Warblers, nor does it make them hybrids (except by a biologically unhelpful, rigidly typological definition). It simply recognizes that hybridization is one of the processes that affects genetic variation within populations.

As for separating Audubon’s and Black-fronted warblers, Toews et al. have this to say:

Within the cluster that includes the Audubon’s and black-fronted warbler there is a gradual latitudinal gradient in the nuclear genome that is also mirrored in some morphological traits (e.g., wing length; Brelsford et al. 2011). Darker plumage patterns and migratory behavior of the birds in Mexico (i.e., S. nigrifrons) separate these individuals from the rest of the Audubon’s group in the United States (i.e., S. auduboni), however there is no known reproductive boundary between these taxa (Milá et al. 2011).

Thus, despite the unusual situation with two mtDNA types, Audubon’s and Black-fronted warblers otherwise appear to show clinal geographic variation, and unless new information is discovered, do not seem to be reproductively isolated.

Goldman’s Warbler, however, is separated from Black-fronted Warbler by something like 1,000 miles and has a unique genetic signature. I think it’s unlikely that the Toews et al. paper — which isn’t really a taxonomic paper — will be seen as grounds for reconsidering the situation by the AOU, but other evidence continues to accumulate, and based on all we know right now, it seems reasonable to me to think of the complex as representing three valid biological species: Myrtle, Audubon’s (including Black-fronted), and Goldman’s warblers. And the unexpected twist with the co-opted mitochondrial DNA to help power migration in the northern Audubon’s birds is a very cool reminder that life finds a way and that things are never quite as simple as they seem. This is a dinosaur. cc-by-sa David Brossard 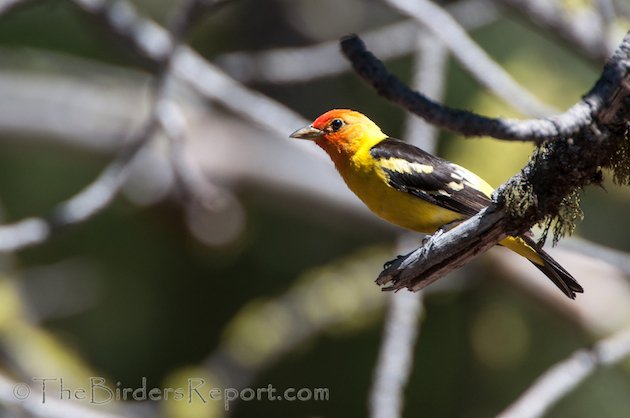