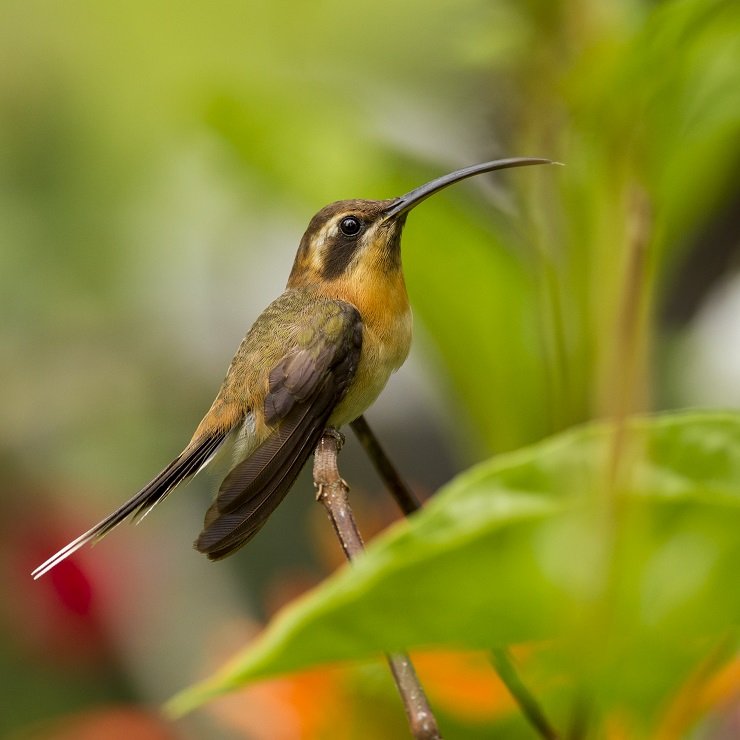 In the southeastern end of Trinidad, the Trinity Hills rises above the mostly flat interior of the island. This trio of hills stood out to a certain lost seaman over 500 years ago – who took it as a sign of the Holy Trinity and therefore coined the name La Isla de la Trinidad. Genocidal legacy aside, the name stuck – but as mentioned in previous articles (see 3x antshrikes, warblers, manakins, trogons, spinetails), there is an uncanny abundance of trios in T&T, at least in terms of birdlife.

Today, I’m going to look at the family Trochilidae, or hummingbirds. Although eighteen species of hummingbirds have been recorded in T&T, within this there are three species of hermits.

The smallest of the three is the Little Hermit. This diminutive hummingbird almost never comes to artificial feeders and one must continually monitor ground level flowering shrubs to have any hope of a fleeting glimpse of this species. Hermit vocalizations tend to be squeaky, often while flying. The exception being when the birds are at a lek, where they sing continuously.

The largest of the three hermits is the Green Hermit. In fact, it is one of the largest hummingbirds in T&T. Green Hermits tend to feed on larger flowers (given its larger size and proportionally longer bill) not necessarily limited to ground level. I have seen them feeding on the flowers of parasitic vines in the mid-story. Typically they are drawn to the brilliantly colored flowers of the Heliconia family.

The Rufous-breasted Hermit is the most commonly seen of this trio – and actually is in a different genus from the previous two. This medium sized hummingbird is extremely shy as most hermits are, and is most often seen zipping past, flushed from an unseen perch by the unknowing observer. Rufous-breasted Hermits do feed from artificial hummingbird feeders though, as does the Green Hermit. The Rufous-breasted Hermit is the only hermit found on Tobago as well as on Trinidad – and is the only hermit that I’ve seen regularly in my backyard. Side note: I have planted a few plants specifically for this bird, but they are yet to flower.

I hope you’re enjoying this extended series of sets of three – having an academic background in mathematics I find numerical patterns in nature quite interesting. More to come, at least until we’re back out birding!

Midsummer's Bird and Some Thoughts on Naming

Many Happy Returns to the Owl Research Institute