Around the World For Penguins: A Penguin Fan’s Book Review 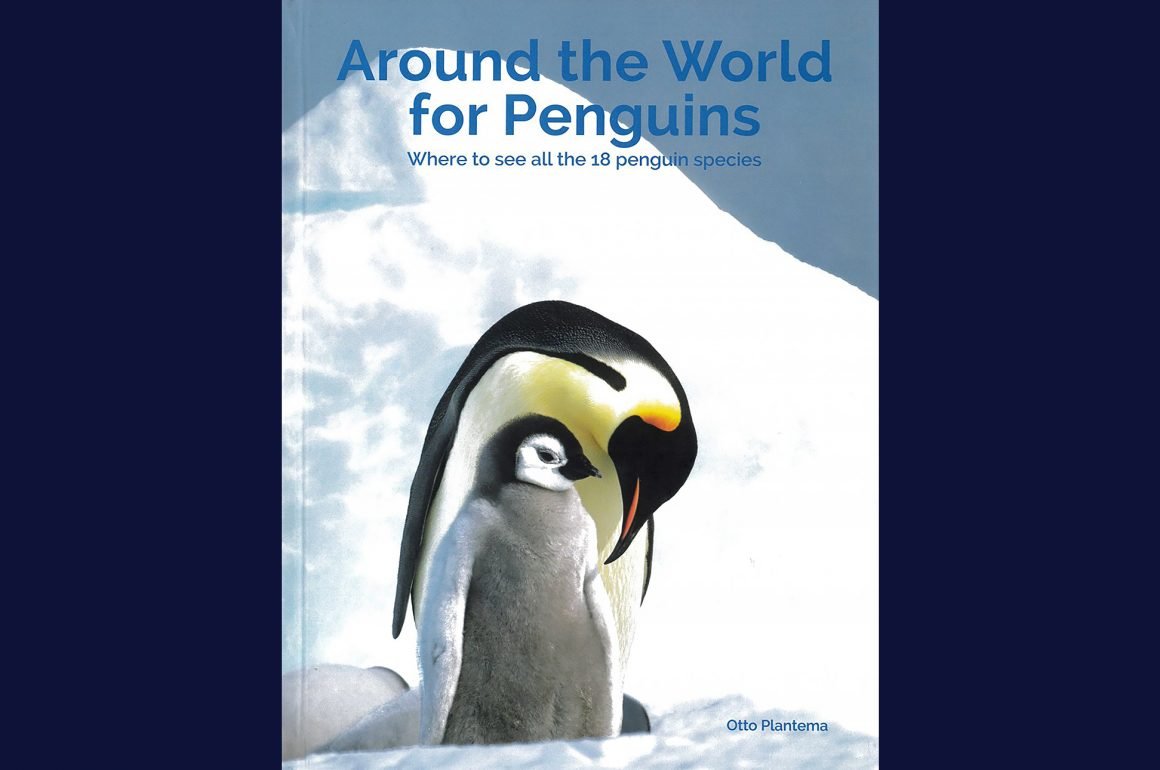 Penguins! Penguins here! <pause> Do I have your attention now? There are few bird names that will elicit great big smiles and Penguin is one of them. Other contenders are Kookaburra, Shoebill, and Umbrellabird, but people smile when they hear these names because they know a song or because they can’t believe these are real names of real birds. Penguins are cartoons, emoticons, animated films, children’s books (though owls really take first place here), sports teams, a book publisher, and a Batman villain (a rare example of penguin negativity, though Burgess Meredith did bring an endearing attitude to his 1960’s TV portrayal).

I’ve been fortunate to see two Penguin species in the wild (African and Galapagos) and have dreamed of seeing more–maybe even all!–especially when reviewing books like A Field Guide to the Wildlife of South Georgia or Far from Land: The Mysterious Lives of Seabirds. I was discussing this with my birder/photographer friend Ardith, who HAS seen every Penguin species in the world, and she sent me news about the publication of Around the World For Penguins: Where to see all the 18 penguin species by Otto Plantema. A combination photographic, bird, and travel guide, this is a unique book, magical and pragmatic, personal and factual. It is a self-published book (unlike some self-publishing bird authors, he has so far not created a publishing imprint for his titles), and an excellent example of how this can be done well.

The goal of Around the World For Penguins is simple: Describe the 18 species of penguin and their breeding grounds “from the perspective of a traveller.” Species descriptions include physical features; distribution; population and population trends; locations of main populations; breeding; food; threats; impact of climate change; migration where applicable; Red List status (vulnerable, near threatened, etc.). But, unlike most books focused on a bird family, this one is organized geographically. Each chapter focuses on a specific geographic area of penguin population: (1) Antarctica, (2) South Georgia, (3) Falkland Islands, (4) South Africa and Tristan de Cunha, (5) New Zealand and Australia, (6) South America and Galapagos. Each of these chapters is divided into three main sections: history and geography, visiting the penguin colonies, and penguin species accounts. Sections and subsections are denoted with the types of outline numbers I used to use in high school. 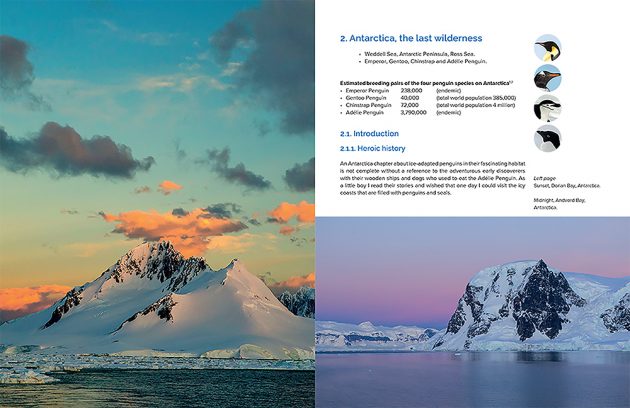 So, we go from Antarctica’s ‘heroic history’ and warming temperatures under climate change, to the limited options for seeing its  four penguin species (cruise ship, direct flight and cruise ship, or sailing yacht–which also seems to mean guaranteed seasickness), to specific locations of breeding colonies, to species accounts of Emperor Penguin, Chinstrap Penguin, Adélie Penguin, and Gentoo Penguin. (The full-length species accounts are not repeated. When we come to Gentoo Penguin again in the South Georgia chapter, for example, we’re referred back to its first appearance in Antarctica, utilizing the outline numbers.)

It’s an unorthodox arrangement that can be confusing when you first open the book. The outline headings help a lot (I’m a big fan of any form of overt organization). There are additional information/finding aides, such as the thumbnail portraits of the penguin species in beginning of each geographic area, the map at the beginning of the book showing where the penguin sites are located, and the ‘Birdlist,’ also at the beginning of the book, that lists each penguin species, their vulnerability status, and the page on which you can find the full species description. I do wish this had been expanded, I’d like to know, for example, if I can find King Penguin in more than one region (you can, but I had to check each chapter to find that out).

The organization works out quite logically if you are planning a trip to, let’s say, New Zealand. Plantema gives highly detailed information about the weather, terrain, ownership of and access to the islands and coasts where penguins breed. This will not be found in your traditional travel guide or even most bird finding guides. For New Zealand, he describes each of the Subantarctic Islands and mainland islands and beaches where its nine Penguin species are found, including endemic species like Snares, Erect-crested, and Royal, and suggests strategies for seeing them all. If you have any doubts whether you want to see a Snares Penguin, you can read the species description, directly following, and drink in photos of their bright, droopy yellow eyebrows, bulbous dark-red bills with bare pink skin at the base, and peek at a group of the penguins, walking en masse within the thick island scrub.

Plantema has travelled to every penguin location, some multiple times, over the past 42 years. He draws on his personal experiences to inform the history, geography, and especially the travel option sections. A lot of his travel experiences involved camping and independent travel on small sailing yachts, and if this is your preferred mode of travel this book will be particularly useful. He also talks about cruise ships and group tours, making recommendations for islands that should be visited and at what times of year.  I was surprised that he doesn’t go into more detail about the different types of group tours available; there is a difference between a large cruise tour for 100 people and some of the smaller tours offered by birding tour groups. The travel information for South America, other than the Galapagos, is briefer and more limited than for the other areas. All of the text–geographic and species facts and data–are supported by a list of scientific literature and online article citations in the back of the book. 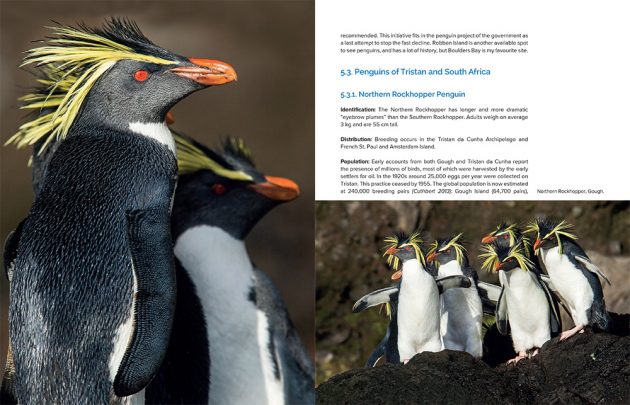 The travel and species information are great, but it is the photographs that make this a special book. Plantema talks about how important it is for him to access the penguin islands at first light. His images show why. They are incredibly beautiful and I wish I could exhibit more in this review. (You can see additional photos at Plantema’s online photo gallery.) Penguins are shown individually in groups, in dense colonies, within habitat (ice, rainforest, beach), swimming in the ocean, and doing things–nose to nose with an albatross, feeding a child, placing an egg on its foot, sliding down ice. The images illustrate the text and sometimes substitute for text, giving a sense of the species’ sense of fun and struggle for survival. They are sized variably, often filling both pages with a series of story-telling images like the Southern Rockhoppers walking right, then left, then a single individual jumping down, or taking our breath away in a single image spread out over two pages. There is one of the King Penguin colony on Volunteer Beach, Falklands at sunset (midnight) that I think is one of the most incredible images I’ve ever seen. The sky and water glow red-orange as the penguins walk across the shallow water, their beaks lifted just above the waterline, their images blurrily mirrored in the water below.

It is not always easy to get the right color in printed photographs. I know Plantema is a perfectionist about this, because when I contacted him to ask permission to use his photographs, he sent me a PDF of a second printing of his book with improved printing of 10 photographs (plus some text updates). The quality of the photographs is supported by the book’s nice, thick paper and a size that’s not enormous, like some photography books are these days, but not too small.

Otto Plantema resides in the Netherlands, is a scientist by trade (he has a Ph.D. in organic chemistry), and an adventurer, photographer, and naturalist. His wildlife photographs have been published in birding and mountaineering magazines and his devotion to his very favorite bird family, the Albatross, have been documented in his book, Around the World for Albatrosses (2019). According to his bio, Birds of Paradise, and Bowerbird are his favorite birds after Albatross and Penguin, so I’m wondering if there are Around the World books for these bird families in the near future?

There are surprisingly few books about penguins in our birding literature. A scientific analysis of the bird family was written by Lloyd S. Davis and Martin Renner in 2003, appropriately titled Penguins (Yale Univ. Press).  Noah Stryker wrote about his experiences doing research with penguins in Among Penguins: A Bird Man in Antarctica (Oregon State Univ. Press, 2011). Continuing the trend of personal adventure, two books have been published recently: My Penguin Year: Life Among the Emperors by Lindsay McCrae (Morrow, 2019) and Every Penguin in the World: A Quest to See Them All by Charles Bergman (Sasquatch books, 2020). Possibly the best reference book on penguins (and an exceptional photographic book) is the title I reviewed five years ago:  Penguins: The Ultimate Guide by by Tui De Roy, Mark Jones & Julie Cornthwaite (PUP, 2014). Around the World For Penguins: Where to see all the 18 penguin species overlaps some with these titles (two titles in one year on seeing all the penguin species in the world–what are the chances?) but has its own unique niche with its travel and geographic orientation. It’s a wonderful book to peruse if you fantasize about seeing all penguin species but know you’ll get horribly seasick if you try.

Around the World for Penguins Where to See All the 18 Penguin Species
by Otto Plantema
Netherlands: Oliver Plantema, 2020. 168p. £32.50.
Can be purchased direct from publisher (ottoplantema@gmail.com) or through NHBS Books.