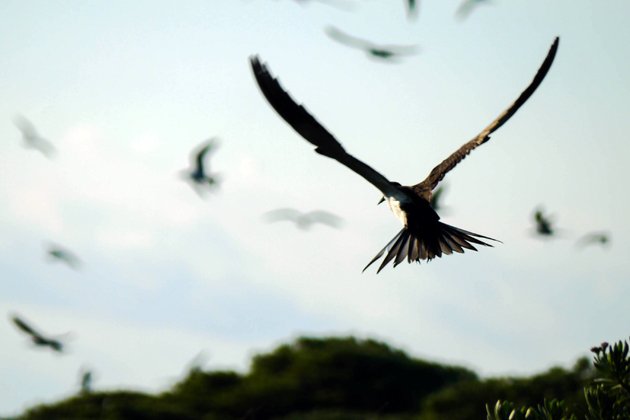 Erika is a first year graduate student studying Ecosystem Science and Conservation at Duke. In her free time she travels near and far to find birds to continue building her life list, though many of her favorites can still be found right in her own backyard. She has contributed many pieces to 10,000 Birds and writes about her birding adventures on her blog, newbirder.tumblr.com.

We assembled at nine in the morning in a small parking lot outside the naval base in Key West, Florida. It was a beautiful morning, with the palm trees swaying in the breeze and the blue of the sky only matched by the bright turquoise blue of the water. There were ten students in total that had signed up for the spring break “Seabirds” course in Dry Tortugas National Park, and after long drives down from North Carolina we had all made it right on time.

The Dry Tortugas National Park is located some 70 miles off of Key West in a small group of keys that makes up the farthest points included in the state of Florida, so it was no surprise that we had a four hour boat ride ahead of us before landing in the park. Though the land itself is small, the Dry Tortugas are home to a large brick masonry fort, spectacular snorkeling, and birds. Lots and lots of birds. It was for the birds that we made this journey in the first place. The park is home to not one, not two, but large three colonies of breeding seabirds: the Brown Noddy, Magnificent Frigatebird, and Sooty Tern. Sooty Terns, with their jet black heads and bills, have been the subject of one of the longest continuous bird studies in the world. For decades researchers have made annual trips out to the Tortugas to catch Sooty Terns, attach tiny silver bands to their legs with unique identification numbers, and then set them free again. Each year more birds are banded and previously banded birds are caught once more, allowing scientists to calculate survivorship data for the colony as a whole.

That’s why we were there. This year, it would be us ten graduate students, plus Professor Pimm, Sonny Bass, a Biologist Emeritus at the National Park Service, and a small group of wonderful volunteers who would also be banding and weighing this year’s group of Sooty Terns. Still, as the boat left the pier early Monday morning, I had only the vaguest sense of where we were going and beyond “bird banding” had a faint conception of everything we would be doing over the next few days. That was mostly my fault. The weeks leading up to spring break had been a whirlwind, and the days before the trip mostly spent driving and exploring Florida. Key West quickly disappeared behind us, and it was a few hours before we saw any sign of land again.

Despite the exhaustion from the weeks of school, and despite the drowsiness induced by the gentle rocking of the boat, I clutched the rail with excitement as we finally spied the Dry Tortugas. As could be expected, the first thing I noticed were the birds. The island contains 80,000 breeding Sooty Terns, in addition to 4,500 breeding Brown Noddies and another 100 breeding pairs of the huge Magnificent Frigatebirds, not to mention pelicans, herons, Black Skimmers, other tern species, and so much more. Though we were a month early for the true migration period, the chances of me seeing life birds on this trip were very high.

Once we landed I didn’t have much time to contemplate the island, rimmed in the amazing blue color that characterizes the water in that region. We were off like a shot, hastily setting up our tents on a small clearing in front of the fort before heading straight out into the giant tern colony to get in a few hours of banding before the sun sunk below the horizon. Standing near a seabird colony is like nothing else. The fort is on one key, while Bush Key – connected by a small sand bridge that washed away in the last big hurricane – contains the Brown Noddy and Sooty Tern colonies. A thin strip of beach separates the ocean from low, green scrub that barely makes it to waist height at its tallest. Birds were everywhere, soaring through the air, walking on the beach, and landing in the low level of vegetation. As we looked closer, we saw the Sooty Terns nesting right on the ground itself, calling back and forth to each other as they sat on their speckled eggs. The Brown Noddies nested slightly higher, and were thus a little easier to see on their nests made of sticks and grass piled together on bushes and even cacti!

Sooty Terns are incredibly birds. Once the young leave Bush Key for the first time, they fly for years. No, that was not a typo, the Sooty Terns fly non-stop for an average of five years before they return to the Dry Tortugas to breed. Their feathers contain no oils, so if they ever fall into the sea they would be unable to dry off again and would most likely drown. That seems like an abnormally high risk for a seabird that makes its living picking up small fish from the water’s surface, but Sooty Terns are some of the most abundant seabirds in the world and spend most of their lives on the open ocean between South America and Africa, so it seems to be working for them. There was no time to be overwhelmed by the sheer amount of sound coming from the thousands of birds – it was time to band!

Banding is best done in teams split into three, potentially four groups. The first set of people, which on the first day consisted of Professor Pimm and Sonny Bass, scooped the Sooty Terns out of the air with giant butterfly nets. Retrieving them carefully, the caught birds were then handed off to the second group, the “runners.” There is a very specific hold that is used for bird handling. The head is caught between the index and middle fingers to prevent the bird from whipping its bill around (with limited success), and the wings are pinned against the body to prevent any injuries.

Using this hold, the runners would quickly walk from the netters to the weighing table, where at least one student would use plier-like tools to squeeze a delicate band on a bird’s right leg, one person would weigh the bird, and one person would record the unique band number as well as the bird’s weight. After all this, the unhappy bird would be released back into the air. Sure, it sounds easy and orderly when I merely summarize our activities, but those first four hours were the most difficult I spent on the island. Of the ten students, two had gone on the trip the year before and one had experience with the Sooty Terns, meaning 30% of us knew what we were doing, and 70% had zero idea. Still, we learned quickly, watching those that knew and then with supervision trying on our own, first tentatively, then with more confidence.

As I said, the birds were not happy with us, though they were not hurt. Their bills were long and held some delightful serrated edges that surprised us when they clamped down on our fleshy hands. The first time it happened to me I was unprepared. My first instinct when something bites me, of course, is to yelp and yank my hand away with all possible speed. Unfortunately, the mere act of pulling my hand dragged my skin against the edges of the bill, increasing the possibility of a cut.

Now, I don’t want anyone in the blogging audience to be alarmed. When I say “cut,” I mean paper-cut sized wounds here. On top of that, we quickly discovered that if we just held still the terns would eventually let go, no harm, no foul. Oh, the lessons of bird banding.

My first job on that sunny afternoon was to weigh the terns. If birds don’t want to be handled, then they definitely didn’t want to be weighed. To ascertain their size I gently wrapped their soft bodies in a loop of Velcro. Once the ends were wrapped snugly around the terns I attached the birds to a scale, letting them dangle for only a moment while I read the weight. When the bird’s ID number and weight were recorded, we could let them go. Turning to face the wind, I gently tossed the birds into the air. All immediately took to the wing, often shaking out their feathers before gliding off. Each took merely a minute or two. Throughout the next three full days I would experience all of the jobs that go along with proper bird banding. I recorded weights and band numbers, jogged in between the netters and weighers, squeezed the tiny bands around the black legs of the terns, detangled birds from the mist nets, and, the most challenging task of all, netted the birds out of the air. As a group we tagged and weighed more than 500 terns, terns that can be recaptured in the future to teach us humans more about the dynamics of the colony.

As we progress into the 21st century and address the impacts of climate change, the terns will be able to tell us much about changes being wrought out on the open ocean where they spend most of their lives. If the colonies begin to have problems, then we, as a planet, will definitely be having problems. I knew their significance as I spent my daylight hours with the terns, but I came to love them also for their antics, their dedication to their eggs, and their beautiful black and white forms. I think it’s safe to say I will be looking for more bird banding opportunities in the future!