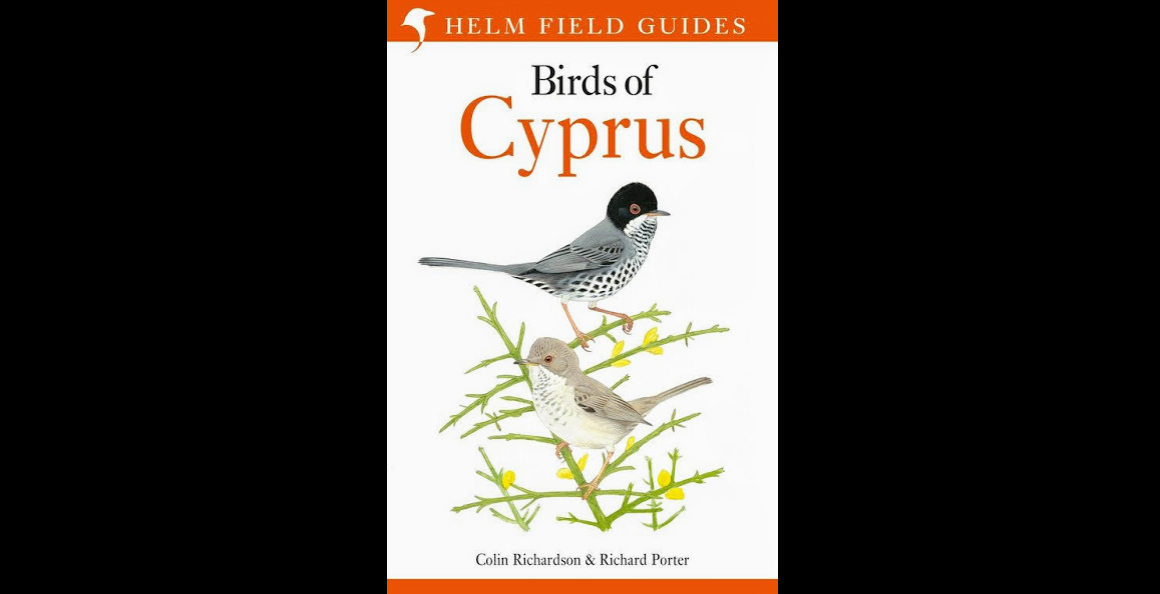 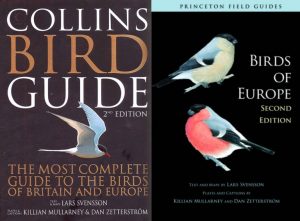 For the last two decades, Europe and the greater Mediterranean have been covered by one of the best field guides anywhere: “Collins Bird Guide” by Lars Svensson et al., published in the US by Princeton as “Birds of Europe”. Not many European countries have their single-country guides (the exception being UK, Spain and a few others with a strong in-country publishing scene). Most European birders use Europe-wide field guides, often translated into a local language, and almost exclusively Collins Bird Guide. Next to such a competitor, it takes a lot of good business sense and simply, guts, to push for a European single-country edition.

Therefore, I was quite surprised when I learned that Helm has taken the gauntlet and, this January, published the “Birds of Cyprus” by Colin Richardson and Richard Porter. When the package arrived, even before I opened it, I knew that it made sense. Unlike “Collins Bird Guide” (CBG) with 416 pages and 1.7 pounds to carry around, “Birds of Cyprus” (BOC) has 256 pages and weighs only one pound.

BOC has 95 colour plates illustrating more than 400 species (three country endemics, Cyprus Wheatear, Cyprus Scops Owl and Cyprus Warbler, among them), with text and distribution maps on facing pages. Also, the low weight of this edition allows for an entire 26 pages-long and fairly detailed information on 68 birding hotspots in the introduction chapter and for 11 pages of the Cyprus checklist in the back. And my first impression is: Wow! 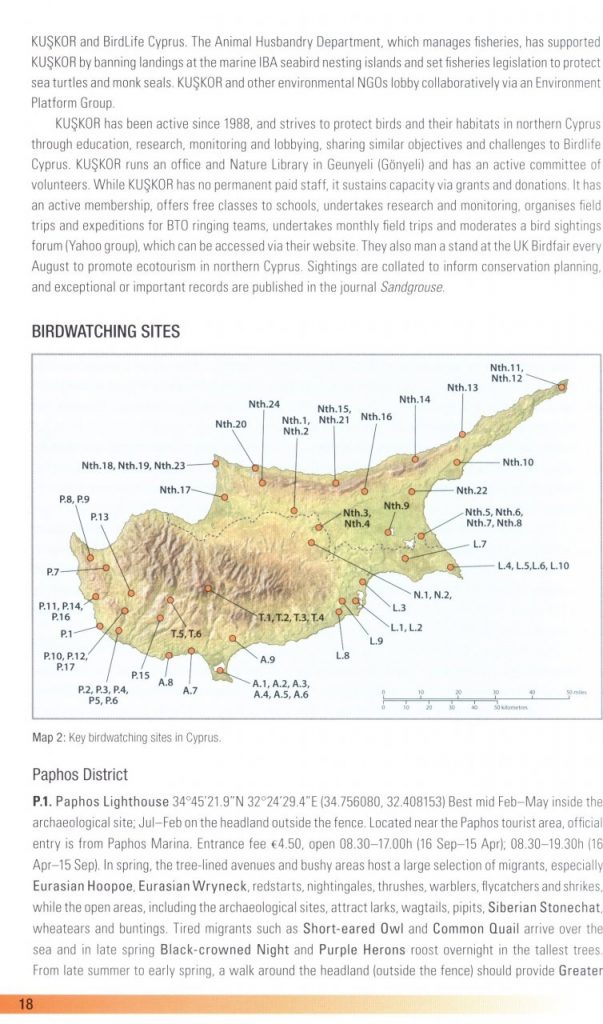 Colin Richardson is an ornithologist with a particular interest in bird migration in the Middle East. He is on the editorial board of Sandgrouse and is the Cyprus representative for the Ornithological Society of the Middle East (OSME).

Following the IOC taxonomy (Gill and Donsker 2018), Birds of Cyprus deals with 405 species. The vast majority, more than 380 species, are migrants, of which more than 120 are vagrants. The authors have chosen not to include several species that are on the official Cyprus list (Desert Lark, Dupont’s Lark, Graceful Prinia and Striolated Bunting), as they feel the evidence to support their acceptance is lacking.

The book starts with, oddly, a black and white physical map of the country, showing main towns, bays and peninsulas, mountains and forests. The Introduction covers the usual topics, but also includes a map and a paragraph on the important dams and reservoirs of this, rather dry country, continuing with a chapter on the enormous scale of bird poaching, with local phone numbers to report bird trapping cases. The birds conservation chapter deals with two bird protection organisations, BirdLife Cyprus of the (southern) Republic of Cyprus, the Greek part of this divided island (internationally recognised), and KUSKOR of the Turkish Republic of Northern Cyprus (only recognized by Turkey). It ends with the already mentioned birdwatching sites. The book ends with References, the Checklist as noted above and the Index.

CBG and BOC seem to be using the same size font. Yet, CBG’s looks like the Times New Roman – hard to read especially when small. BOC’s may be graphically simpler Arial (or similar), making it far easier for reading in a car trotting along corrugations in a dirt track or in the final fading light of a day. Also, the main ID characters in CBG are in italics, only making them harder to read; compared to BOC where they are in italics + bold + as I said, an easier-to-read font, making them obvious and easier to follow.

As can be expected, maps in CBG merely notice presence and status of the species on a barely noticeable outline of Cyprus within the entire Europe and North Africa. Stemming from Richardson’s decades-long programme of population-mapping on the island, maps in BOC show status (resident, breeding, wintering or passage visitor) but also the region where the species appear and, in case of waterbirds, individual wetlands marked all over the Cyprus map.

Defined as an art form in which traditional painting techniques (e.g. watercolor, gouache, etc.) are applied using digital tools (a computer, a graphics tablet and stylus, and software), digital painting is aggressively taking over the field guide scene. Because the results show very natural looking birds and with minute details, it is hard to complain. But the artist somehow disappears in the process, and there are field guides painted by more than 30 artists of which all have such a consistent and uniform style that you may be forgiven for thinking that all the work was done by a single artist. 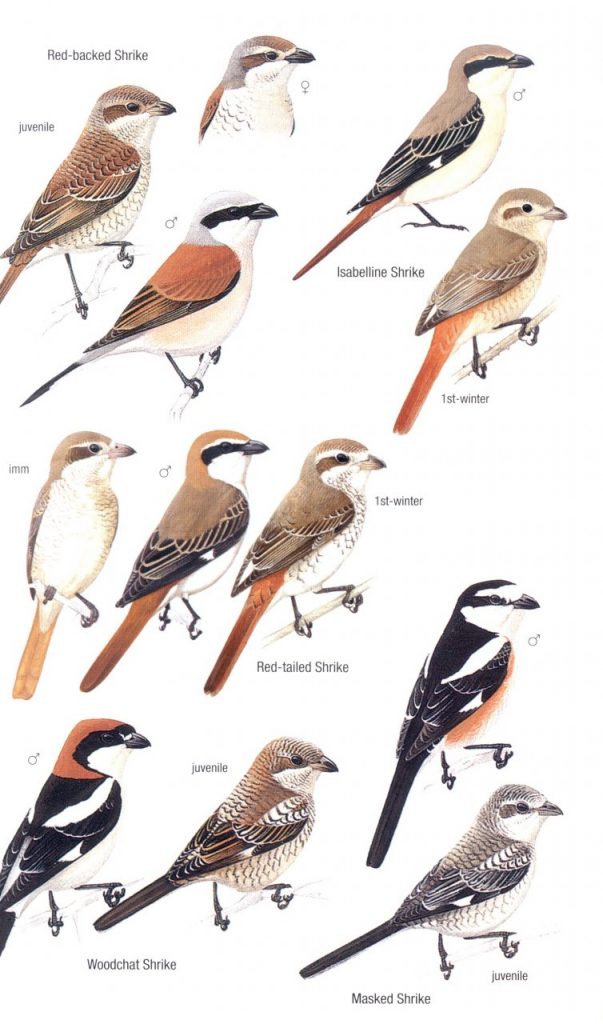 Now, let me test the armour of “Birds of Cyprus” (BOC) against the mace of the “Collins Bird Guide” (CBG). The first thing to notice, CBG pages seem overcrowded when compared to BOC. CBG plates have smaller (but more numerous) illustrations, yet also painfully smaller font used for comments next to them (still, such comments are absent from BOC). 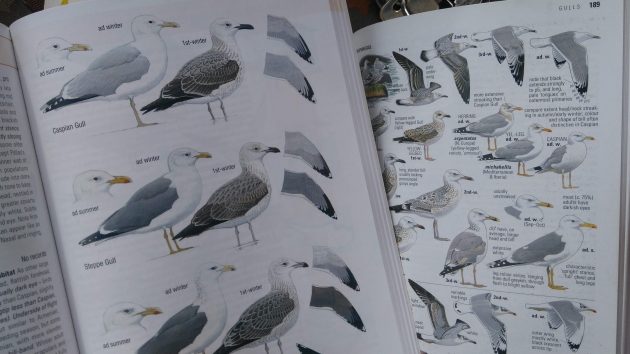 Checking gulls, CBG shows 6 to 9 illustrations per species, vs. BOC that shows 4. Instead of showing the whole process of maturing through the 1st winter, 2nd-w, 3rd-w like CBG, BOC shows 4 illustrations per species: adult summer, ad. winter, 1st-w and the wing pattern. And here I have mixed feelings. Immatures are better shown in BOC, while adults are better shown in CBG. Also, the wing pattern in CBG is shown rather small, on a flying bird, while in BOC they are bigger and more obvious, shown on a ‘cut-off’ wing.

In Europe, shorebirds, gulls an warblers are the three hardest groups to present, describe and ID, so I tested the BOC armour where I knew it would be the weakest. Shorebirds are generally well shown, but the colours are often too warm, possibly as a consequence of insufficient colour control in printing (CBG wins but not significantly so). With gulls, BOC held its ground fairly well (an even score). While many warblers in BOC are shown fairly well, I’ll have to say that in the warbler category, CBG wins overall. The other groups are easier and, hence, shown well.

In the end, if I were packing for Cyprus, which field guide would I pack and why? The illustrations in Birds of Cyprus are very good (despite a bit warmer colouration here and there), the text doesn’t only underlines the most important characters successfully, but becomes noticeably longer and more detailed when dealing with trickier species, and finally the maps actually give you a rather detailed info on where and when to expect that bird.

Also, Birds of Cyprus is not just a good field guide, but a more user-friendly one when compared with a much heavier Collins Bird Guide with its overcrowded plates and hard-to-read font (which reminds me of an optically superb top-of-the-range pair of binoculars that I found oversized and too heavy to use comfortably). Checking Birds of Cyprus again, the plates are clear, illustrations large, font simple and readable. So, which one would I pack? The Birds of Cyprus definitively. 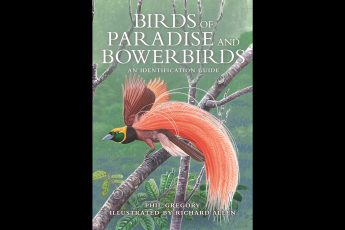 Birds of Paradise and Bowerbirds: An Identification Guide--A Book Review 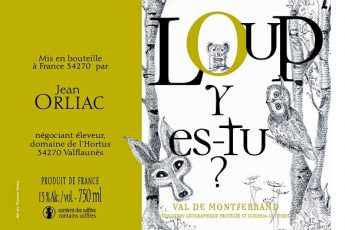