Ending 2021 with the Steller’s Sea Eagle 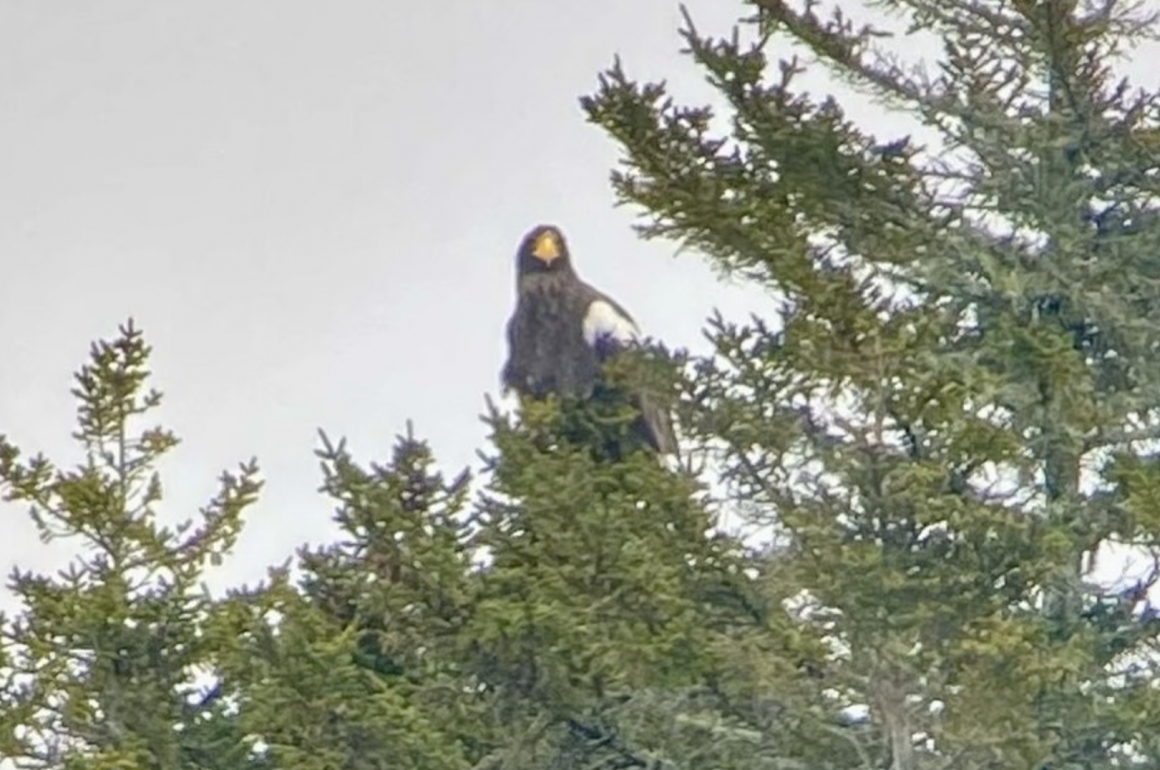 Steller’s Sea Eagle photos through a scope by Gwenne Oberg.

It was perhaps the most important text my Aunt Gwenne had ever sent me – a link to a Tweet. Clicking on the blue url, I gasped, my eyes widened, the hair on the back of my neck stood up: the Steller’s Sea Eagle had been spotted in Maine, just over an hour from where I stood at that moment.

If you are plugged into the birding community, you’ve probably seen photos of this errant eagle, normally found in Russia and Asia but now be-bopping around the United States and Canada. It’s a giant, striking raptor, with a bright bill and distinct white wing stripes. I knew it had been recently seen in Massachusetts, but now I had a chance to see it for myself, on the very last day of 2021.

Birding has become a family affair for my relatives. My mom worked at the Cornell Lab of Ornithology during college. My grandmother has gone on birding walks for decades, and was with me when we spotted my lifer Snowy Owl. My Aunt Gwenne has fallen in love with photography, and birds are one of her favorite subjects. I work at Audubon. So on that chilly December morning, it was no surprise that we wanted to seek out the eagle.

Aunt Gwenne and my cousin Nina went first, heading up to the town of Georgetown on the Maine coast, where Doug Hitchcox of Maine Audubon had been tweeting out updates from the wharf. They texted me as they went along, and my mom and I followed about 90 minutes later (we had to take my toddler son sledding before the snow melted). My cousin especially was a saint, patiently confirming where we needed to navigate to and responding to my angst as I worried the eagle would fly before we arrived. I celebrated with them when they spotted the eagle.

They left before we arrived, but their success gave me hope. I nearly ran to the wharf from the car, rushing so completely that Mom and I left the scope in the trunk (we went back for it later). “Where are we looking?” I asked the first birders I happened upon – part of the group of dozens, if not 100+ people on the wharf.

Pointing to an island off the coast, the birders told me it had just gone behind a tree. Others noted I could probably make it out if I moved to the edge of the wharf, so move we did. And then, in a graciously shared scope, my Mom and I had our first glimpse of the incredible Steller’s Sea Eagle.

Later, reflecting on the experience, we all noted how friendly, how positive, how helpful everyone acted that day on the wharf. People offered scopes, pointed out the eagle, and shared in the general awe of such a sighting.

“I went looking to find a rare bird for this part of the world, but more importantly found a community of generous and engaged people who wanted to ensure that I saw the eagle and that I realized my dream,” said Gwenne.

I couldn’t agree more! What an incredible way to end the 2021 birding year.