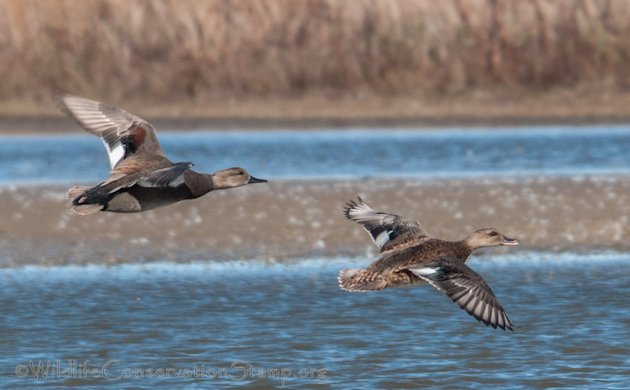 According to Birds of North America Online, 97% of female Gadwall are paired by November. These pairs of ducks are obviously strengthening their pair bonds at this point. Here is the list of “Courtship Displays” from BNA Online:

Introductory Shake. Male’s head-feathers become ruffled, and head is sunk on body and shaken repeatedly; bird then rears up high out of the water and flicks head forward. Prelude to major displays.

Down-Up Display. Male quickly thrusts bill into water, with breast low in water. Then jerks head up quickly with breast still low, raising a small fountain of water. Emits a whistle when head is at its highest, followed by Burp. White speculum visible during this display. Almost always follows Head-Up-Tail-Up Display.

Grunt-Whistle Display. Male rears high out of water with head arched forward, raking bill through water as bill rises. Then presses bill to breast and sinks slowly back to water. This display accompanied by loud whistle, followed by low Burp. Most frequent of the major displays.

Turn-the-Back-of-the-Head Display. As female incites, male swims in front of her while performing the display.

Mutual Chin-Lifting. While facing (more or less) one another, male and female repeatedly raise and lower heads, with bills pointing somewhat above horizontal when raised.

Preen-Behind-the-Wing Display. Performed by both sexes. Places bill behind slightly lifted wing as if to preen but does not actually preen. Performed frequently and tends to be linked with ritualized drinking in males. Frequently performed by female toward actual or potential mates.

Inciting. While following her mate or potential mate, female arches neck and head toward water and moves head back and forth from front to the side away from her mate and directed toward (“threatening”) other males or rivals. Alternates threatening movements with Chin-Lifting toward preferred male.

See how many you can spot!

You may want to check out my other post on these beautiful dabblers.