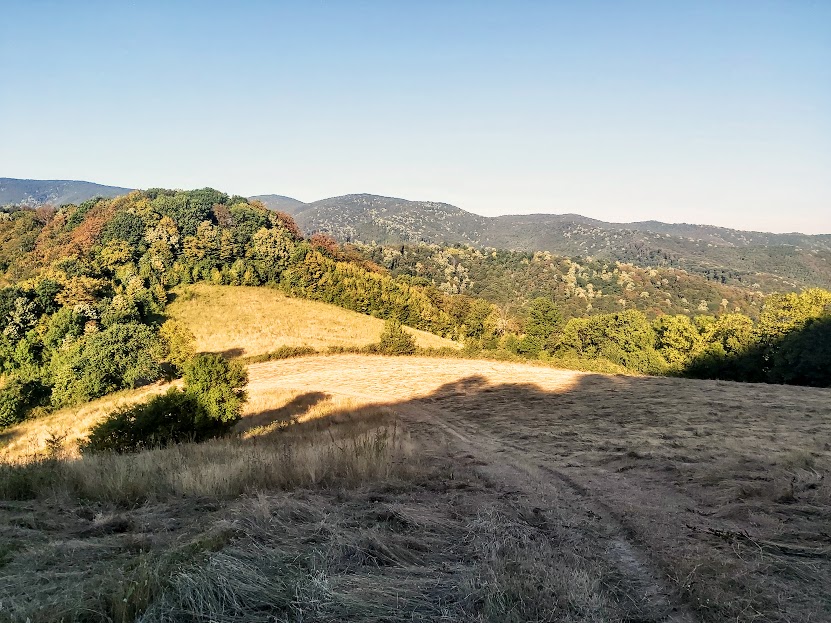 That first field trip to Djerdap Gorge National Park, eight years ago, was made as a part of an ecotourism potential evaluation project. And in order to evaluate its potential, my agenda was to spend whole two days in the park and to produce the best possible evaluation based on that visit.

Habitats: Check
Birds… well, more presumed what the possibilities are, than actually checked…
Sleeping: Check
Getting around: Check

I will come back to these topics in a while. But there was one more thing I evaluated, the human infrastructure, the potential guides among the national park employees. It is possible that they did not realise that they were evaluated, too, and maybe they did not push for their best, but my impression was: they likely saw the development as having more work for the same pay. And there were no local birders to consider. Everything else was either working well or could have been easily mitigated, but you cannot produce local guides overnight, nor was it a part of the project activities. Nevertheless, I left gifts behind, two dozen copies of a common bird guide (which I wrote and published) for local wardens. Hopefully, something may have changed in the meantime.

On the second day of that visit, the wardens suggested to try the “Forgotten” Road, once the main road to Romania, but today, after a dozen tunnels and a new riverbank road were constructed four decades ago, merely a track of a derelict and crumbling tarmac winding over a mountain pass. It sounded birdy and I was game. 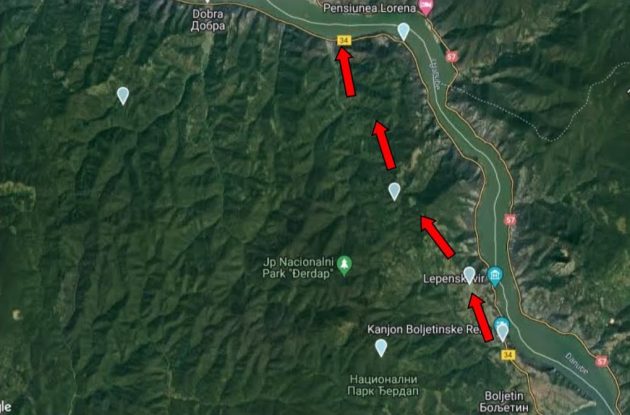 The first section is a steep uphill, through the meadows and old orchards of a sunny, south-facing and bird-filled slope (more on birds in a while). There were two cars used by project participants, and I, the only birder in the group, drove the first car. One of the problems was poor communication. We avoided using the phones because of the relief: we were losing the signal of a Serbian provider and every now and then picking the Romanian signal from the other bank of the Danube, but with additional roaming charges. We had no walkie-talkies for a quick exchange, and whenever I was braking for some bird they had no idea where to look or why I stopped.

And then we entered a beautiful beech forest at the gentler, northern, river-facing slope. When the signal light turned on, I discovered that I made a stupid mistake of not visiting the petrol station in the morning. So it turned out to be a tense driving without many stops or birds. The nearest petrol stations were about 30 km in each direction (Golubac/Donji Milanovac) and I made it on time, but it wasn’t much of a birding.

Writing my evaluation, I relied heavily on input from my ornithologist friend Bratislav Grubac, who explored that area extensively. Many years have passed by now and I have visited the Forgotten Road 2 to 3 times in most years, enough to find most of the birds Bratislav mentioned, but a few of the mostly nocturnal, such as an Ural Owl or a Corncrake (I always visited in the morning). Yet, I did find a few that Bratislav did not, also firsts for the national park, the Shore (a.k.a. Horned) Lark and the Woodchat Shrike.

Djerdap (a.k.a. Iron Gates, after the ancient Roman name for the gorge, Porta Ferrea) National Park lies in the north-eastern Serbia, where the Danube has incised the longest gorge of Europe, extending for over 100 kilometre (62 mi), stretching from the medieval Golubac Fortress to the Roman castrum Diana. The national park encompasses the river and a narrow mountain area, two to eight kilometres (1.2 to 5 mi) in width, reaching 50 (the River Danube level) to 800 metres (160 to 2600 ft) above sea level (Somrda Mt.).

In 1887, Jovan Cvijic, one of the greatest Serbian naturalists, noticed that this area is “covered in inaccessible forests” and that it has “the appearance of real primeval forests”. Forests still cover more than 70% of the Djerdap National Park. The most important edificators of the forest ecosystems are sessile oak (Quercus petraea agg. Ehrendorfer 1967), beech (Fagus moesiaca L.), white ash (Fraxinus excelsior L.), maple (Acer spp.), tilia (Tilia spp.) etc.

The Forgotten Road route: This is a 19 km / 12 mi long section of once the main regional route (driving along it, you will find this hard to believe). When the new road was built in 1986, this one has all but disappeared from the maps, memories and the local municipality road repair budget. 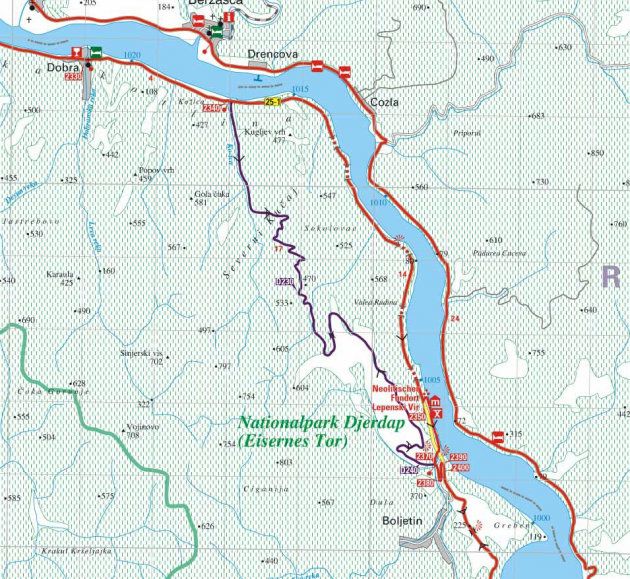 My usual way of visiting this site is to drive from Belgrade before dawn all the way to the Boljetinska River Canyon (by the Boljetin Village), at the downstream end of the tour, about 170 km (105 mi) or 2 h 30 min. Then I drive upriver and slowly return to Belgrade, visiting other sites en route (and because of that D-touring, I make some 400 km / 250 mi in total). But you can come the day before; there are rooms to let in the Dobra Village itself, at Stanojevic and Cvetkovic homesteads, so it is possible to spend the night there and start birding when you open your eyes.

The Forgotten Road route connects the villages Boljetin and Dobra, at first (coming from Boljetin) passing through meadows interspersed with oak groves and orchards (apples, pears, plums), and further north, through dark and old beech forests.

The turn off from the main road is marked for Boljetin (44.540039°N, 22.030813°E), and it comes soon after one of the tunnels – be sure not to overshoot it. In some sections (closer to the village of Boljetin), the Forgotten Road tarmac is heavily broken by hefty lorries full of beech tree trunks (however illegitimate, still legally logged within the park), while in the northern, forested section, it is potholed, but not too bad.

After the Boljetin turn off, the road goes down until you reach a small bridge (marked with the international Danube cycling route sign for Golubac). You can park by the side and check the Boljetinska River Canyon at your right, a true geological history book.

This was the first geological site protected in the Djerdap area, formed along a fault by incision of the Boljetinska River into the sedimentary rocks. Visible layers of sediments were deposited from about 160 to about 145 million years ago, when this area was a part of the Tethys Ocean. Various cephalopods (ammonites and belemnites) inhabited the ocean at that time, as evidenced by their fossilized remains, still found in the sedimentary rocks.

But your reason to check the canyon is a White-throated Dipper that breeds there and with some luck, you may even encounter a Rock Bunting. Other species include Grey Wagtail and Marsh Tit.

After 8 kilometres, you will reach the highest section of the Forgotten Road, at 500 m / 1600 ft a.s.l, where there is a Y junction, left for the Somrda Reserve (dirt road), right for the Dobra Village (and, farther, Golubac Town) – keep right. Somrda Peak (810 m a.s.l.) is known as the northernmost range of holly (Ilex aquifolium), a relict evergreen species, in Serbia and the only site in Djerdap.

But, as I said, keep right, down the northern slope and into the forest for the next 11 kilometres. You will first encounter pure beech forests of upper slopes, mixing with sessile oak and common hornbeam, maple and ash as you go down, and at lower slopes, pure forests of sessile oak.

Once I tried this route in January. I was worried about ice on the road in the steeper southern slope, but it is also the sunny side and it was passable. Prior to entering the gentle-sloping forested side, I was lucky to meet park wardens, who warned me of the deep snow inside the shadowy forest, which was an obstacle even for their 4x4s, so I turned back. White-backed Woodpecker (female) at the Forgotten Road by Vitrag Shah

Most of the birds I encountered were inside gullies, by the inner bands in the road, especially in the higher, beech forest. I cannot tell whether that habitat is really richer, or is it because of the fewer side branches, so the visibility is better (likely the second). Those higher slopes are where I found the best woodpeckers, such as White-backed, Black and Grey-headed Woodpecker. Middle and Lesser Spotted Woodpeckers were mostly in lower, oak sections. Also, that section passes by the imposing Sokolovac Peak (626 m a.s.l.; look out for Alpine Swifts).

Other species that I have not found there yet, partially because of the morning visits, are Corncrake, Booted Eagle, Eurasian Scops and Ural Owls.

And finally, you reach the Danube riverbank and the good tarmac of the main road. Donji Milanovac, where the park HQ is situated, is at your right, while Dobra, Golubac, as well as Belgrade (about 155 km / 96 mi) are at your left.

What I usually do afterwards is visit the Labudovo okno Ramsar section of the Danube on my way back. But you may opt to turn some 12 km (7 mi) to your right to visit the Lepenski Vir, an important Mesolithic archaeological site housing a large village with unique stone head-sculptures created 8000 years ago. Or you may opt to visit 2300 metres (7500 ft) long Rajko’s Cave by the mining town of Majdanpek, at the southern side of the mountains (the turn off lies between Boljetin and Donji Milanovac). And in the evening you may be back in Belgrade (or you may stay for another day).

Practicalities: The riverside town of Golubac (130 km / 80 mi or two hours’ drive from Belgrade) is the entrance point to the area. It is possible to reach it on the Friday afternoon, sleep there and go birding at the crack of dawn on Saturday. Almost every village between Golubac and the next town of Donji Milanovac (a further 60 km / 40 mi) offers rooms to let, but petrol stations are to be found only in the towns.

If you want to do the tour from Dobra, going downriver, the upriver end of the Forgotten Road lies east of Dobra. Go right after the third bridge with bright red railings (counting the one in Dobra as #1) and follow the international Danube cycling route sign for Donji Milanovac and Kladovo. The Dobra turn off from the main road is at 44.629390°N 21.959730°E. 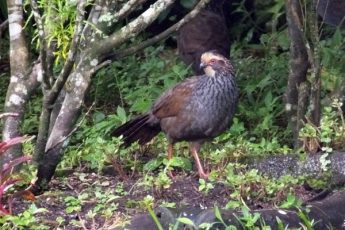