Chronicles of my Guatemalan birding adventures are still forthcoming but I thought it might be nice to focus on one special bird from the tropics. The Northern Jacana (Jacana spinosa) is a striking wader that ranges from Mexico to Panama. With its attenuated, spindly toes and day-glo orange shield, the jacana looks like a close relative of gallinues or moorhens, but it actually closer kin to plovers and sandpipers. If you visit any lake, pond, or wetland in northern Guatemala, you’re quite likely to see one or several of these beauties. That’s where the trouble begins…

How do YOU say Jacana? 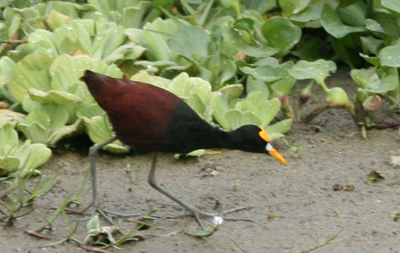 This question isn’t as innocent as it sounds, as there are at least four ways to say it. The word jacana descends from the Tupi jasanã? by way of the Portuguese jaçanã. That funky ç, called a cedilla, is used in Portuguese to denote a soft c and while the cedilla isn’t often used in most spellings of Northern Jaçana, it technically belongs there. Thus, a straight reading of the word would be Zha-sah-NAH. However, the discussion doesn’t end there.

Ways to pronounce or mispronounce this word are legion. Many, like myself, tend to eschew the traditional pronunciation of jacana for an Anglicized Jah-KA-nah. For the record, this is the way one refers to the other seven species in the family Jacanidae. Others meet tradition halfway with Jah-sah-NAH. Still other interpretations, influenced by Spanish, the dominant language of the American tropics, refer to spinosa as Ha-KA-nah or Ha-sah-NAH. So how about you? How do you pronounce jacana?