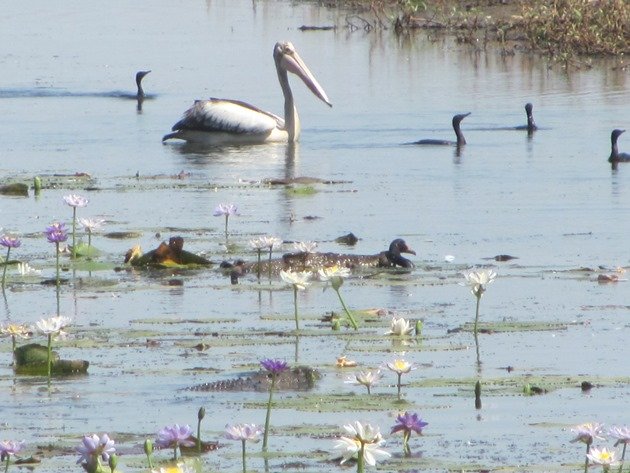 Whenever we go north from Broome we stop in at Parry’s Nature Reserve and visit Marlgu Billabong. The water level varies greatly on each visit and the birdlife varies accordingly. In fact on our most recent visit the water level was much lower than on any other previous visit, but there was not as much rainfall during our last Wet Season and so this was not surprising. We still observed 45 species of birds in the reserve in about an hour and there are always raptors to observe as well as the usual water birds. Marlgu Billabong is always a good place to observe crocodiles and often when people enter the hide it is the first thing that they are looking for! They are reliably on the far bank to the left of the hide unless they are in the water, which is less likely during the day in the cooler months.

On August 20th we entered the bird hide at about 10am and were noting the birds present and six crocodiles on the far bank when suddenly a large crocodile grabbed one of the Little Black Cormorants that was feeding in a small group in the middle of the billabong. Before I could even get my camera ready it was gone. The other Little Black Cormorants stopped feeding and swam away to the edge of the billabong and some got out. I now had my camera ready, but believed I had missed the action. How wrong I was! The crocodile then grabbed a Magpie Goose! The above photo shows the first moment of impact where the Magpie Goose is plunged underwater.

The Australian Pelican obviously decided it was safe to continue on with its feeding after the incident and observed the crocodile consuming the Magpie Goose. 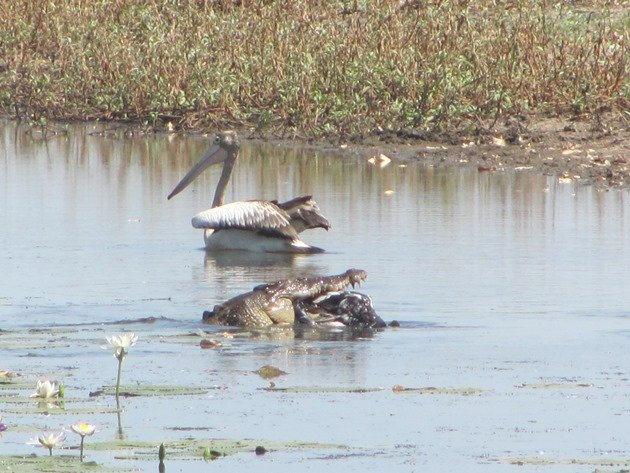 The next excitement was a smaller crocodile moving in towards the larger crocodile and it is at this point that the Australian Pelican decides to leave the area! 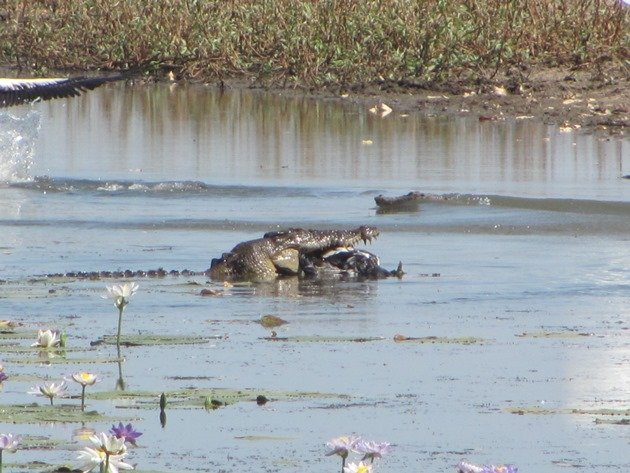 The small crocodile positions itself near the larger crocodile eating the Magpie Goose and a Black-necked Stork comes over to investigate what is going on. During the next part of the feeding frenzy the smaller crocodile returns to the bank. 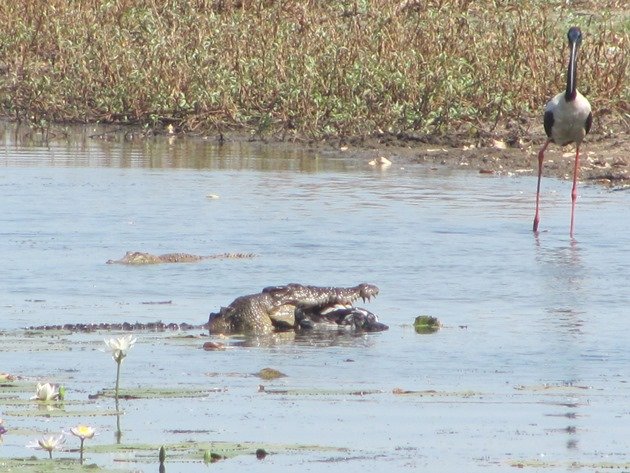 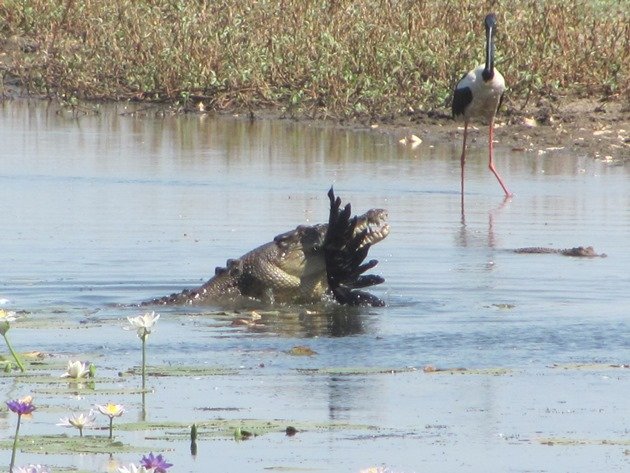 The crocodile raises its tail as it consumes the Magpie Goose and rearranges it in its jaw to consume it. 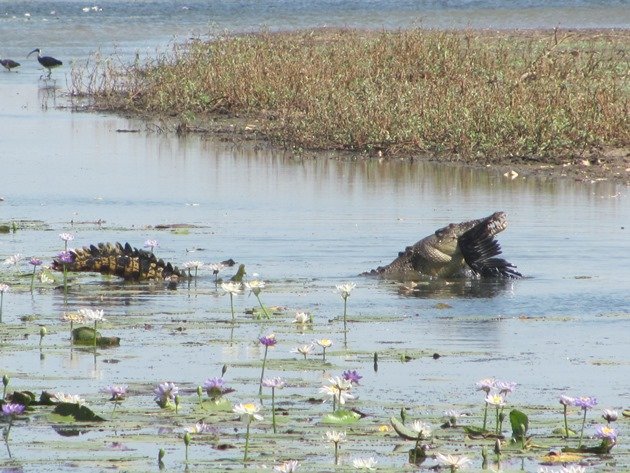 It then starts to get interesting, because a few minutes have passed by and a variety of larger birds are interested in what has just happened and what is currently happening. The crocodile is now been watched from close quarters by a Black-necked Stork, Australian Pelican and Brolga! The Little Black Cormorants have decided the bank is a safer place to be! 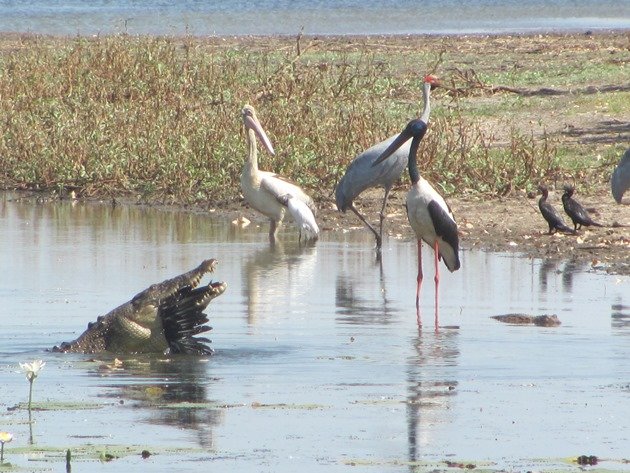 Onlookers as the Magpie Goose is consumed!

A second Black-necked Stork joins the crowd and they all move in closer to watch the consumption of the Magpie Goose. 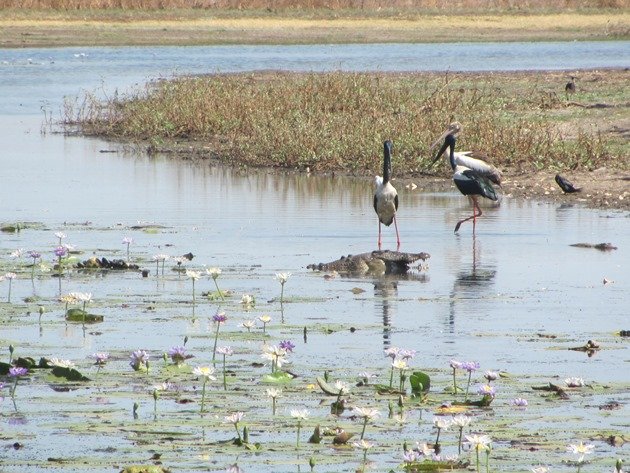 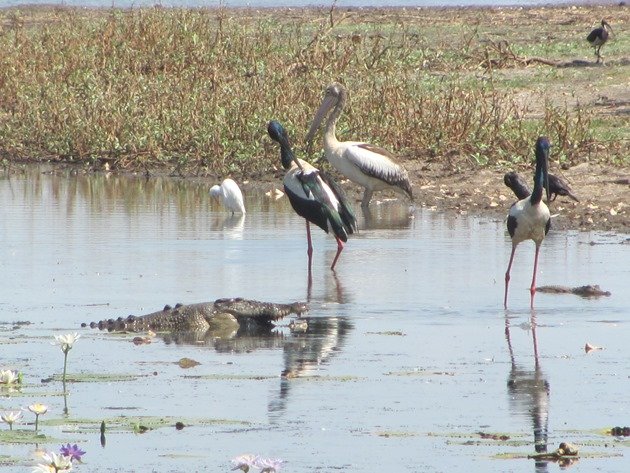 Other birds watching the crocodile feeding

Finally after twelve minutes the crocodile has completed feasting on the Magpie Goose and slowly sinks down into the billabong. Having eaten a Little Black Cormorant and a Magpie Goose in succession it has no doubt satisfied its hunger for some time! 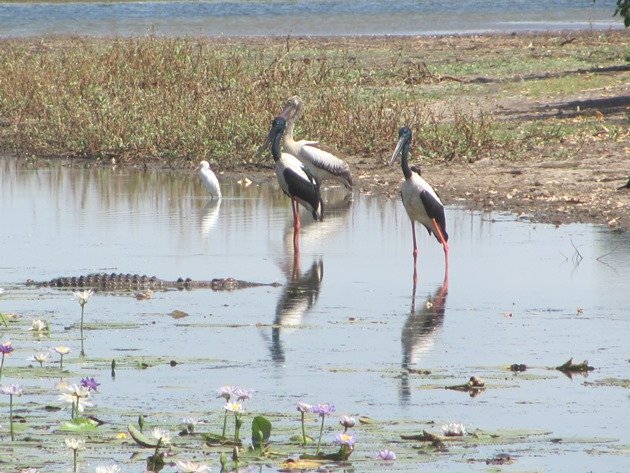 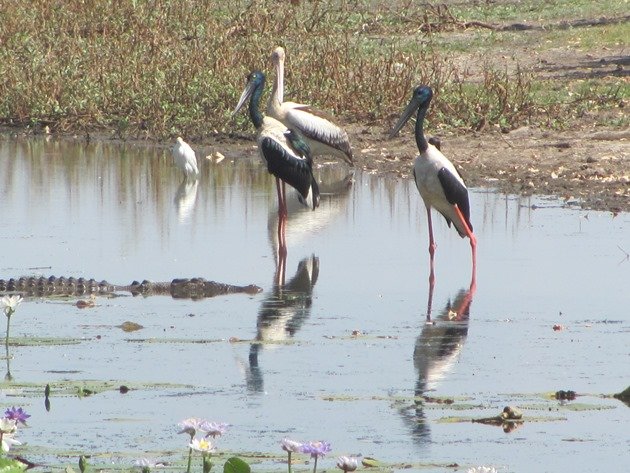 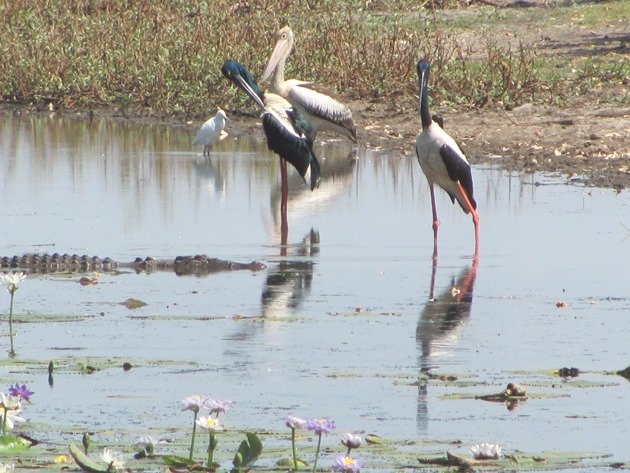 It is interesting that the other birds present were inquisitive after the predation, but it is something we have observed before in other situations. We have observed Royal Spoonbills crowd around a speared fish that was dying as the tide receded and they also appeared to be enthralled by watching the demise of a creature. A natural curiosity appears to attract some birds to what may appear to be a dangerous situation. It was an interesting experience for all involved (except the Little Black Cormorant and Magpie Goose) and not something I have captured on camera before!