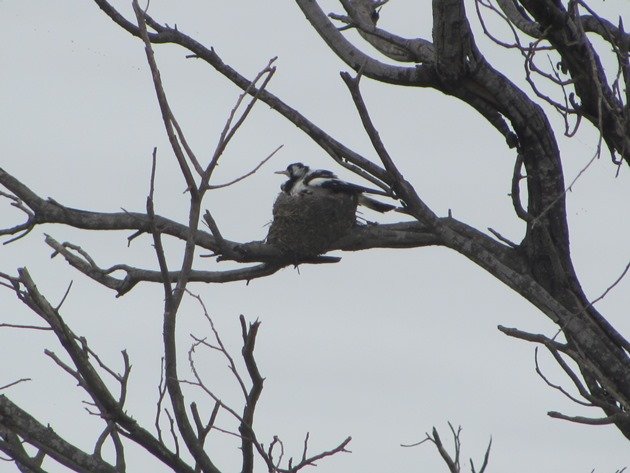 Magpie-larks are a very common bird throughout most of Australia and they are quite at home among the large cities as well as in the country towns and the remote parts of Australia. They are in fact not related to either Magpies or Larks, but do have the black and white colouring of a Magpie and are much smaller in size. Magpie-larks are regular visitors in our garden and they nest in the trees in our street bringing their young into our garden for water once they have left the nest. Magpie-larks have been busy at all of the muddy puddles in recent months collecting mud to make their nests. They will nest several metres off the ground in trees or even man-made structures and we actually had one build a nest on the rafter of our veranda as our house was being built. Magpie-larks can also be rather annoying at messing up your windows and car mirrors when they become obsessive about looking at their own image. There are several nicknames for the Magpie-lark around Australia and you may hear them called “Peewee” or “Mudlark” and the local name is in fact “Mudlark” which is very appropriate for its nesting habits.

Whilst enjoying the Magpie Geese breeding around Broome recently we also noticed a Magpie-lark nest close to the highway in one of the very few trees beside the road. The female was sitting on the nest went we first travelled by as shown in the above photo. 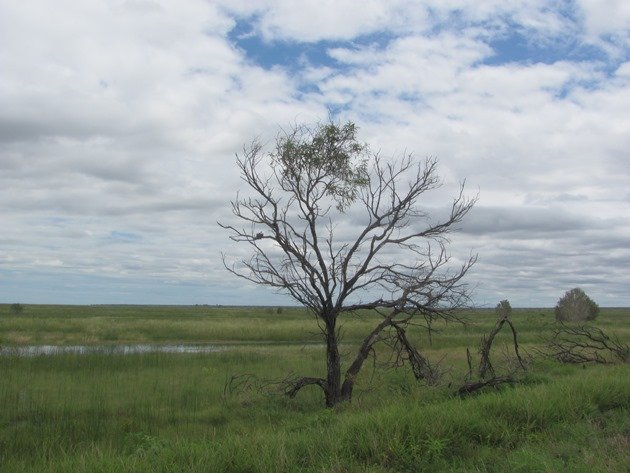 Magpie-lark nest on the left of the tree

On returning several hours later the sky had turned very dull and the female Magpie-lark was out collecting food for the young. The Magpie-larks diet consists of mainly insects and there are currently numerous grasshopper species about after the recent rains and also a huge variety of dragonflies. The young Magpie-larks were eagerly awaiting the return of their parent and one particular young bird was rather more eager than the other two. 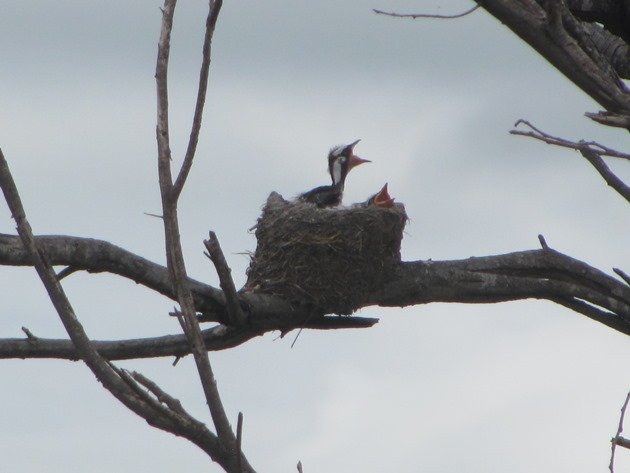 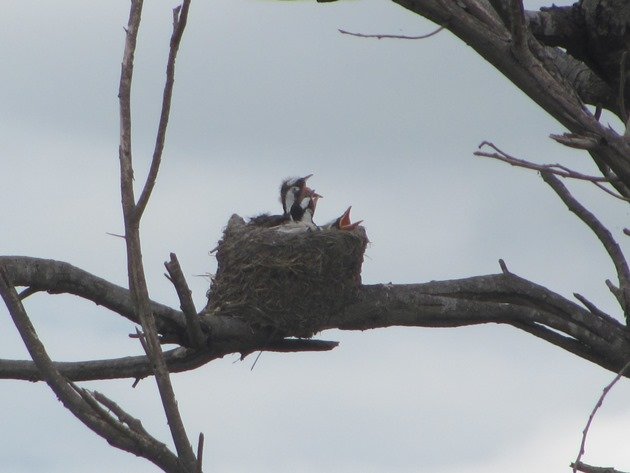 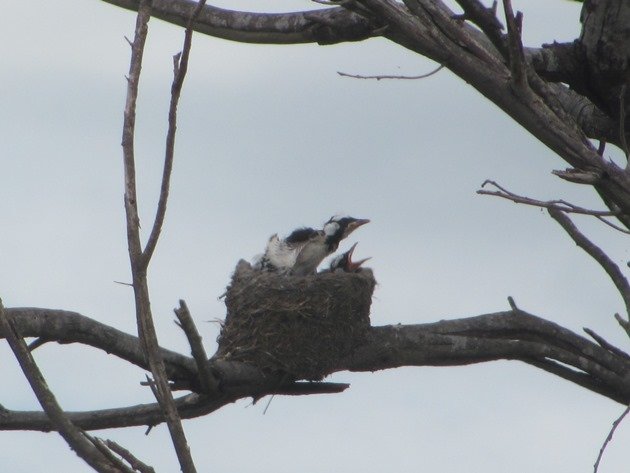 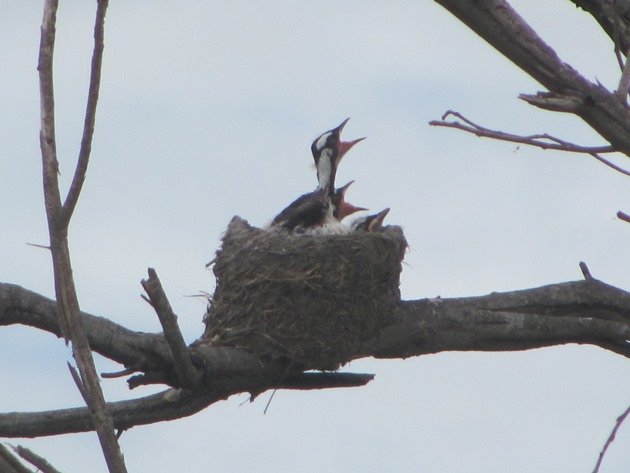 Three young Magpie-larks in the nest

We watched the area from the car and it was not long before we saw the return of the female Magpie-lark with food. She waited for a moment and flew in towards the nest. While we had been waiting one of the young had raised itself up and let its waste drop outside the nest. 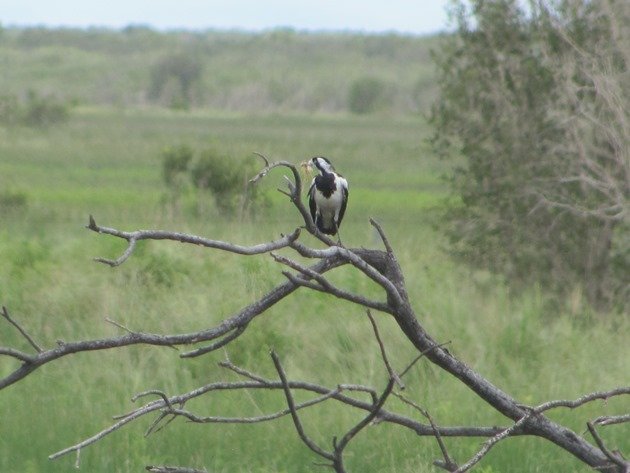 Female Magpie-lark with a large grasshopper

The female Magpie-lark gave each of the young some food, but one particular bird was definitely keen to take the most food that it could. 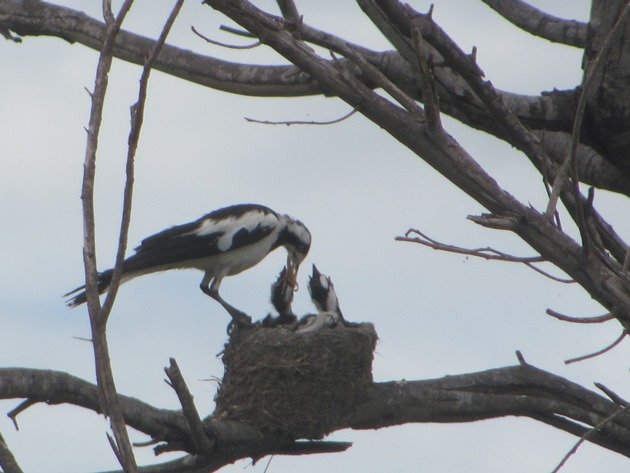 The female Magpie-lark then proceeded to clean up around the nest area removing the waste and flew off in search of more food. There was no need for her to travel far due to the area being inundated with water and insects in recent months. It is believed that their territory can be up to ten hectares and they are defensive whilst in their territory. 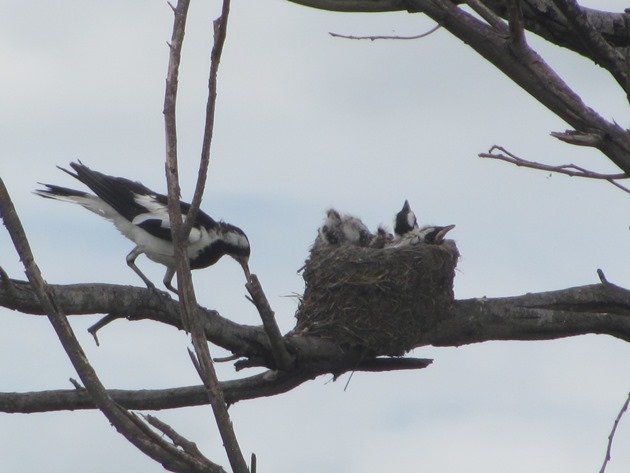 Cleaning up after the young Magpie-larks

The last few months have been exceptionally good for the bird-life around Broome and many species have been breeding or are in the process of breeding. We are expecting an incredible year with all of the extra water that has fallen in the area bringing some bird species that have been absent in dry years.

This is how big they are six days later! 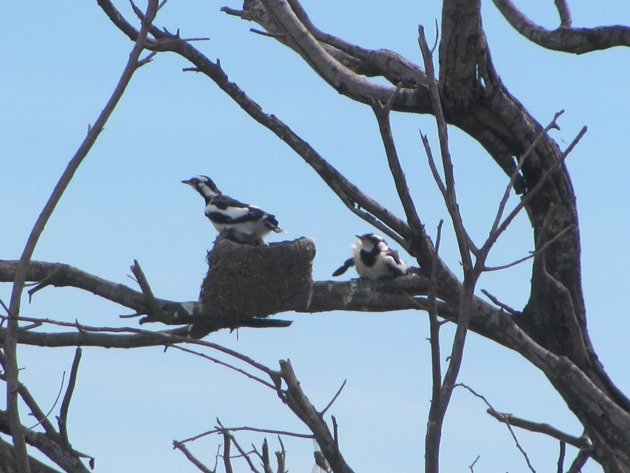 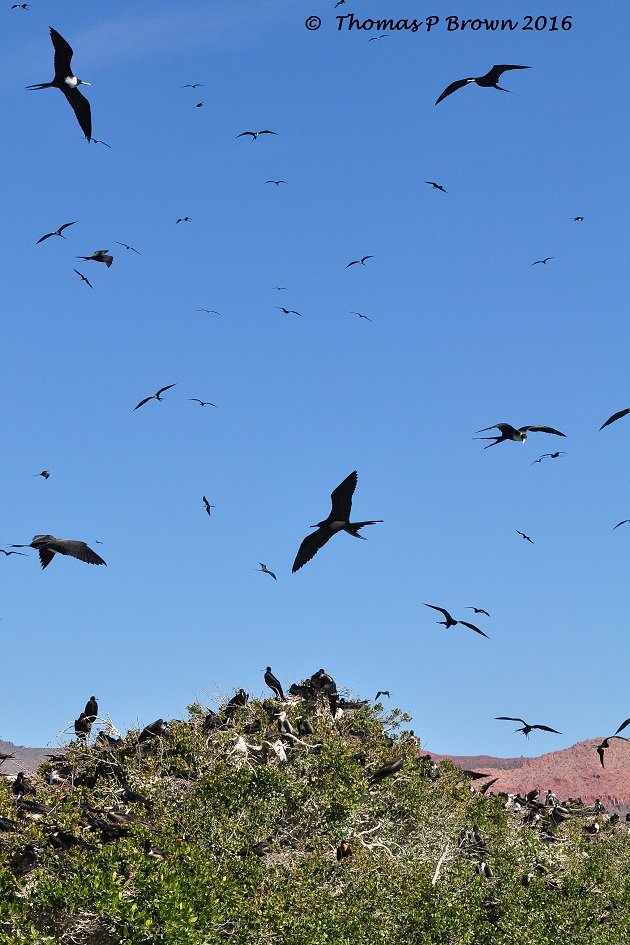 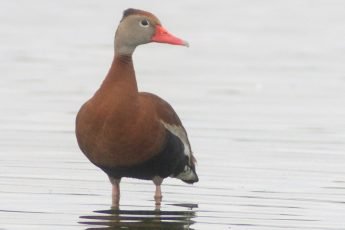