Murder Most Wildfowl: A Review of “A Dance of Cranes” by Steve Burrows 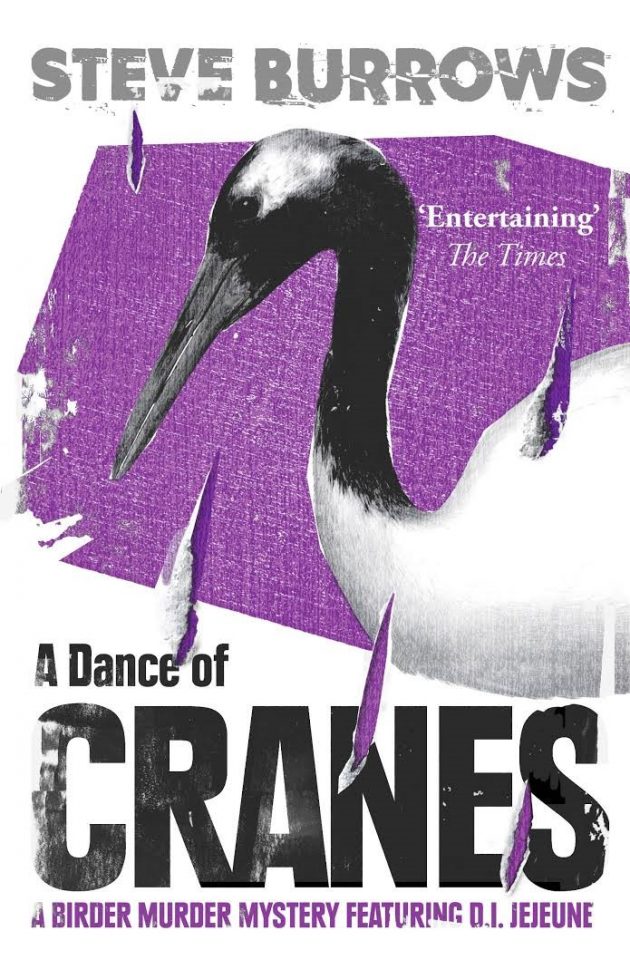 Since the last notice of him on this blogsite (in June 2018), Steve Burrows has published two more novels in his terrific “Birder Murder” series, the fifth and sixth – respectively, A Tiding of Magpies and, now the latest, A Dance of Cranes.  This is good news, and especially so for birders.

It is true that not every reader has a fondness for murder mysteries (and there is, admittedly, a certain amount of dreck in the genre, much of that authored, curiously enough, by lawyers).  It’s a matter of personal preference:  neither does every reader like, say, science fiction, or the writing of Henry James, or romance novels.  There’s no accounting for taste.

This was particularly brought home to me when I recommended an author, a contemporary favorite of mine, to a friend.  The author sells in the gazillions but writes, as not many gazillion-sellers do, with grace and sophistication and elan.  And blood and violence.  Lots of blood and violence.

Anyway, the friend, a literate fellow, was one of those who scoffs at mystery novels.  But I insisted he try the blood and violence guy, and he humored me, only to send me, later, a longish email, pointing out the flaws in my judgment and in the book and the author, and closing with this:  “Since I didn’t care for any of his characters, I really didn’t care who killed whom.”

But even if you’re not a fan of these kinds of stories (whether you call them “crime thrillers” or “detective noir” or whatever) you are, indeed, a birder — so the “Birder Murder” books are well worth your time.  The wealth and depth of information about birds and birding, and the intertwining of birds into each plot, makes them irresistible.

The six books are populated by Domenic Jejeune, Deputy Chief Inspector in a rural English constabulary; his girlfriend Lindy Hey; and a dozen others, coppers and civilians, good and bad actors, with a new character or two, principals or bit players, introduced in each book.  (In Cranes, the reader meets, for the first time, Roy Ducannon, a Canadian RCMP sergeant who has a cool but respectful relationship with his brother-in-law, Jejeune.  It’s the kind of curious complexity that must portend Ducannon’s return in future episodes.)

Each book involves a new crime (or several) to solve, but otherwise the characters live in a continuing story.  A psychopath who had threatened Lindy earlier in the series makes good on that threat in Cranes; the somewhere-on-the-spectrum Jejeune continues to be more comfortable with birds than humans; and a potential love affair between two police detectives, Danny Maik and Lauren Salter, continues to stumble along unfulfilled, each one needing the other but unsure of how to bring that about, as it has for the last several books.

Each title in the series is the collective noun for a bird species, which becomes a central theme of the story.  In A Dance of Cranes, dancing, both avian and human, is a leitmotif.  (For one example, a dispute over the old rights to a Motown dance act (of all things) is the cause of the murder at the heart of the book.)

There’s plenty of good bird information parceled out, as well, in service of the story or adjacent thereto.  As one character explains, male whooping cranes don’t wait to get onto their northern breeding grounds before starting their elegant/spasmodic breeding dance – there’s a link between the hormones that inspire the dance and those that drive the migration instinct.

And there’s a good discussion of how natural instincts (like the migration instinct) can be eliminated from the DNA of a species when, for example, a small population on the brink of extinction is taken into captivity, ostensibly for its protection – as almost happened, in 1941, when only fifteen migrating “whooper” adults were known to exist.

This is a marvelous series of books, plotted cleverly, with carefully drawn characters, each one having poignant human foibles and imperfections and clumsiness (all of which are missing from the avian world).  At the end of Cranes, Danny Maik has a concussion, suffered in the line of duty, and Lauren Salter goes to his house to look in on him.  He puts an old music DVD on the TV and tries to show her how to dance to it – their own mating ritual, at last:   “He wrapped an arm around her waist and together they swayed gently to the music, Danny leaning comfortably against her, and Salter still resolutely facing the screen as the tears flowed down her cheeks.”