Spring migration is sublime, like the fragrance of exotic blossoms, like the promise of health to one who has ailed for a long time. Yet sometimes even this blessing can feel like a burden. The birds are finally here, which means that the only reasonable response, no matter what else is happening, is to get out there and greet them. That’s why I’ve been stealing minutes here and there for birding even though I can’t carve out full hours. Don’t get me wrong; I enjoy every moment of communion with the multifarious mass of migrants. It’s just that I can’t give these new visitors, who have flown so far to arrive here, as much attention as they deserve.

Nonetheless, between my careful scrutiny of the area around my place of work, an early-bird excursion to Central Park, and a midday romp with Mason at Tibbetts Brook park, I’ve managed to catch up with almost all our common warblers and a few other birds besides. New Jersey added Common Yellowthroat, American Redstart, and Northern Waterthrush to my year list. Central Park provided more of the same, as well as Swainson’s Thrush, Ovenbird, Prairie Warbler, and Nashville Warbler. This was my first time laying eyes on Nashville, which from my vantage mostly resembled a fat, feathered lemon with a stubby tail hopping amidst the treetop. Oddly enough, I saw my second Nashville Warbler at Tibbetts Brook the next day, along with plenty of the species I’d already spotted and a couple like Blackpoll Warbler and Warbling Vireo that I hadn’t. 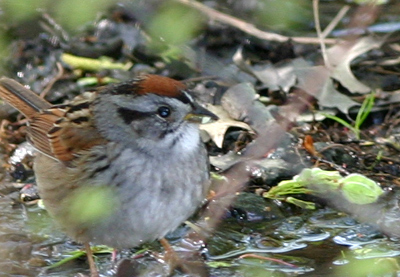 My hurried excursion to Central Park was motivated by a sighting of Chuck-will’s Widow in the Ramble. Regrettably, neither that rufous rarity nor the persistent Blue Grosbeak appeared for me, which is quite a shame. I did discover, however, that the NYC White-throated Sparrow is in no danger of extirpation; every tree, thicket, and plot of grass was crawling with these birds, presumably preparing for a short hop to the boreal. Another discovery, really more of a growing realization, was that Swamp Sparrow is fast becoming one of my favorite sparrows. These birds, adorned with rich rufous and smoky gray, appear far more vibrant than one expects from such a cryptic species.

I’d be remiss if I didn’t note my growing dissatisfaction with Central Park birders. I’ve remarked quite often on how impressive I’ve found the kindness, courtesy, and overwhelming generosity displayed by bird watchers across the world. A pair of binoculars around one’s neck usually serves as the secret sign that grants admission to an international network of on-location guides willing to share a sighting or helpful tip at the drop of a hat.  Yet, here in my own city, I can rarely elicit more than a wary nod from my fellow avian observers. Now, I’m a New Yorker through and through, as anyone who’s met me can attest. I know the elaborate rules that govern social interaction within the five boroughs. But I also know that, if someone asks you what you’re scanning the treetops for, you should take a second to register the querent’s appearance before remarking, “Birds!” while rolling your eyes. If the person asking the question is also strapped with bins as well as a lens as long as your arm in the middle of the most heavily birded section of the most heavily birded park during the most heavily birded month of the year, perhaps he’s looking for something a little more specific and less condescending…