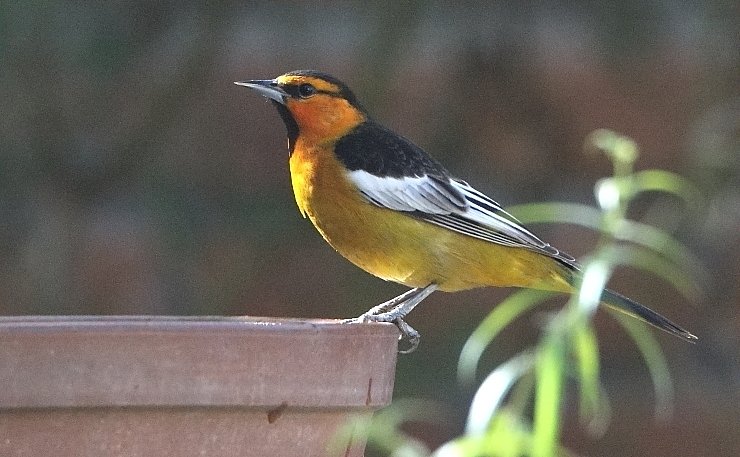 I will soon be just one year short of Sir Paul McCartney’s mythical musical age (64, that is, not his current age), in which my life will apparently be limited to “mending a fuse” and “going for a ride”. So I have indeed begun to question what birding options I will have, when I am no longer able to trek Michoacán’s rugged trails — although all the evidence suggests that day will not arrive until I’m well beyond the age of 64.

This has added an extra layer of satisfaction to what is turning out to be a spectacular winter and spring of backyard birding. Every day seems to bring a new surprise, to the point where I feel I would probably be a happy birder even if I could only look out my back window. For the first time ever, I have surpassed 50 days with at least one eBird list per day (although my Monday lists are limited to what I see on my 8-hour outings away from home). Even when I think I might not submit a list, something exciting turns up to change my mind.

To be truthful, summer will probably still be a frustrating time if I am ever housebound. But winter, with our many migratory visitors, and spring, with the height of our dry season pulling many non-urban (and some unexpected) species to the birdbath, can make even my back window a thrilling spot. Earlier in the day in which I write these words, I saw 21 species, all without leaving my home and yard. And, since I never just bird while at home, more species probably arrive there on any given day.

Of course, the regulars, like House Sparrows, House Finches, Bewick’s Wrens and Inca Doves, are always present. And we have some more exotic “regulars” here as well, such as Black-vented Orioles and Broad-billed and Berylline Hummingbirds. Blue Mockingbirds are daily visitors in the spring, and in this time of year, are important contributors to my garden soundtrack.

Common migratory visitors include Warbling Vireos, Hooded Orioles, and Yellow-rumped, Wilson’s, Nashville, Orange-crowned, and Black-throated Gray Warblers. Lincoln’s Sparrows are new this year, but every day at least five have been visiting my garden. (I wrote about these regulars previously, here.)

Still, even very satisfying species can feel routine when they turn up every day. That’s why it is this past month’s surprises that give me so much to look forward to. I can even mention them by date!

On March 20, a beautiful male Lazuli Bunting visits my birdbath, and a small flock of Cedar Waxwings fly overhead. On March 21, Mr. Lazuli brings a friend, and a male Western Tanager also arrives.

March 23/24: A Virginia’s Warbler forages in my jacaranda tree. These are common in lower, drier sites, but quite special up here.

March 25: The birdbath gets its first visit by a Gray Silky Flycatcher. A beautiful male Bullock’s Oriole (shown with the title) and a Western Tanager are also present.

That’s a Black-vented Oriole on the left, and the Gray Silky-Flycatcher on the right.

March 26: A Northern Beardless-Tyrannulet perches in the jacaranda tree, and a normally shy Orange-billed Nightingale-Thrush leaves its woodsy home to get a nice drink of water.

March 28: It’s rare but possible; occasionally a novelty is not welcome. A few years ago, Eurasian Collared-Doves started turning up in Morelia. And this day, one finally finds my birdbath. That’s a big bird! If it decides to bring any friends, may need a bigger bowl.

March 29: Another Monday out.

March 30: The Nightingale-Thrush and Collared-Dove are back.

March 31: Same as March 30, but add a Golden-fronted Woodpecker (not that unusual, but always an amusing visitor).

April 2: A female Ruby-throated/Black-chinned Hummingbird visits the ever-popular jacaranda, but doesn’t give me enough time to determine which it is. (That’s an almost-impossible task, anyway.) An endemic Rufous-backed Robin drops in… literally.

April 3: OMG again, that’s a White-eared Hummingbird feeding on the… wait for it… jacaranda! Not a species I expect to see in a suburban neighborhood. I wish it had stayed for a portrait. A male Indigo Bunting, now in his brilliant blue breeding plumage, makes an equally brief visit. But Mr. Starthroat is back, and this time, I manage photos.

April 4: The male Lazuli Bunting and Bullock’s Oriole are back, but the star of the day is a Black-headed Grosbeak that stays in the jacaranda tree long enough for a photo. Grosbeaks come for the jacaranda seeds, not the flowers.

It doesn’t fit within this post’s timeline, but one more surprise visitor has recently appeared here. On March 1, I saw (or, at least, recognized) my very first Lucy’s Warbler up by Lake Cuitzeo. The desert bird was right where it should be, in a very dry mesquite forest. But four days later, for some reason, one turned up in my wonderful jacaranda tree, far from any desert-like habitat. Three days later, I saw my third one down in Tierra Caliente (the lower-altitude Hot Country)!

Lucy’s Warblers, like Varied Buntings, are distinguished by having no distinguishing marks… unless you can see their (sometimes) reddish crown patch and rump. Which you usually cannot see.

A final note on birdbaths: Nothing will increase the bird population in your garden, as a source of water. They don’t sell real birdbaths down here, at least where I’ve shopped, so I had to improvise. Mine is actually a water-proof pot saucer from a shop that sells clay pots. It is quite deep for most birds, although just right for the larger orioles and Blue Mockingbirds. But I have an inverted roofing tile in the middle for the smaller birds to stand on while they bathe. More than one inch in depth is too much for warblers and other small birds, so it is important to find a way to offer more than one depth. And don’t buy a glazed, brightly colored birdbath; though beautiful, their shiny surface is too slippery for birds to accept with confidence.

Best Bird of the Weekend (Third of December 2011)

« Previous post
More Birds Than Bullets: a book review
Next post »
A World on the Wing: The Global Odyssey of Migratory Birds–A Book Review