The whole team visited the New York Botanical Garden this afternoon. Our primary objective was their Wednesday Farmer’s Market, not nearly as impressive as it used to be. While we were there, however, we had to take in at least some of the flora and fauna. Few flowers were blooming this fine August day, nor were there any surprises on the avian front. Birding the Bronx at midday during the height of summer brings lots of House Sparrow, European Starling, Northern Cardinal,Â Â  Northern Mockingbird, Gray Catbird, Blue Jay, American Robin, Common Grackle, Red-tailed Hawk, and American Goldfinch, but little else. At least Sara was able to snap this great shot of a Downy Woodpecker. 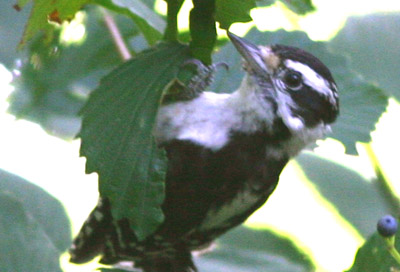