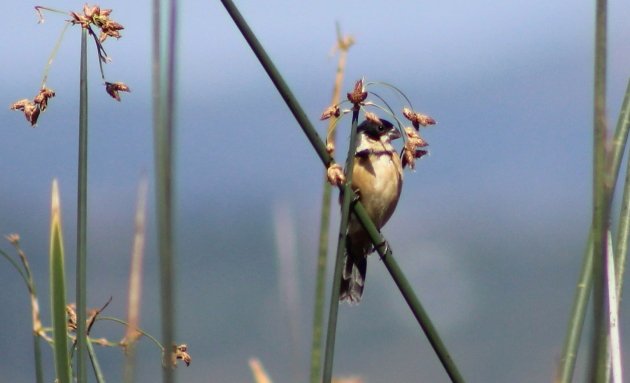 I have written six posts in the last two weeks, in preparation for a long-awaited month-long vacation. (We will be finishing up that trip when this post appears.) After that  forced march, I decided to relax and share with you some of my favorite photos from my five years of birding with a camera. Some of these photos have birds in them, but some do not; and they are in no particular order. 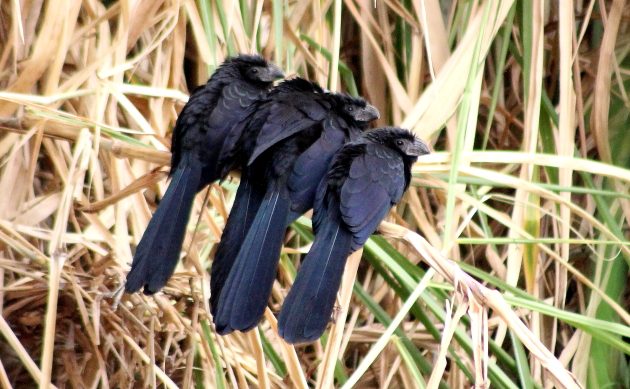 The photo above is from Pedernales, Michoacán, in Mexico’s Hot Country. Never before or since have I seen Groove-billed Anis line up this way. Somehow, they look to me like grumpy elders judging passers-by. 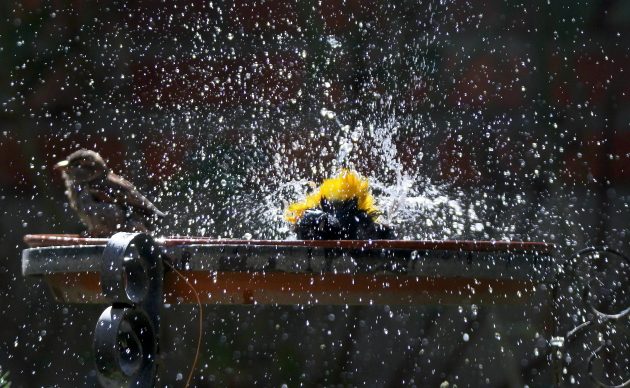 House Sparrows are by far the least interesting birds to visit my garden’s birdbath. Black-vented Orioles are among the most interesting. In this case, the oriole is clearly winning. 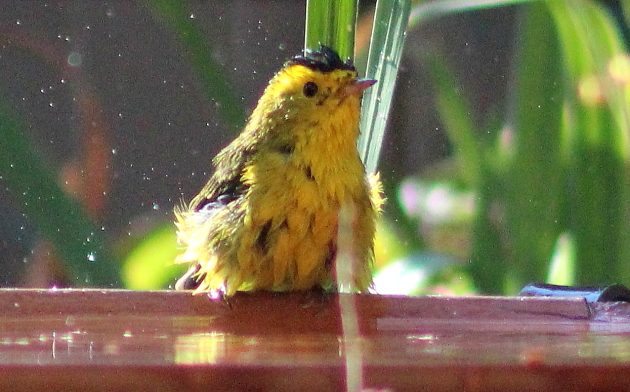 Sorry for the bad joke (and pretty poor photo), but this one could only have one possible title: Wet Willie. 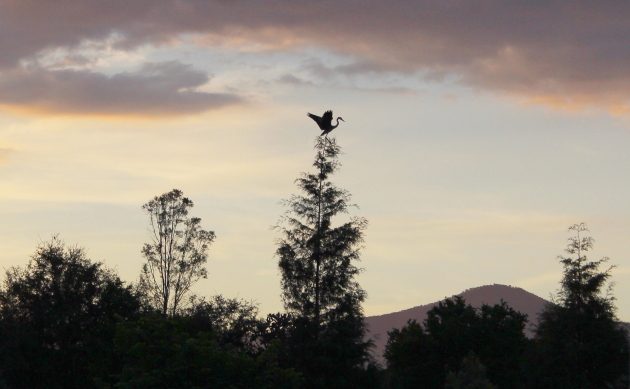 I don’t know what was more surprising: seeing a Great Blue Heron land just outside our waterless church property, or the precarious perch it had chosen. Either way, I love the photo. 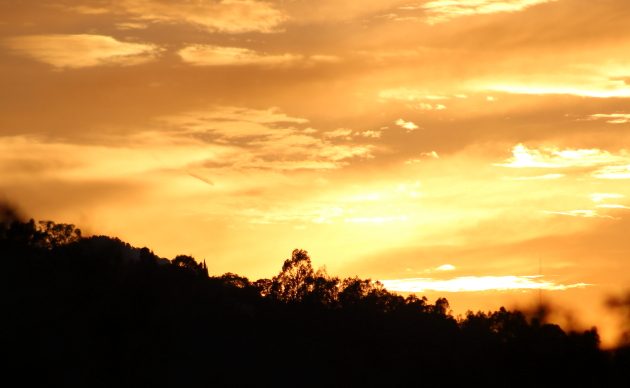 I stayed out birding too long on the steep hill behind my home one evening. I was not sorry. 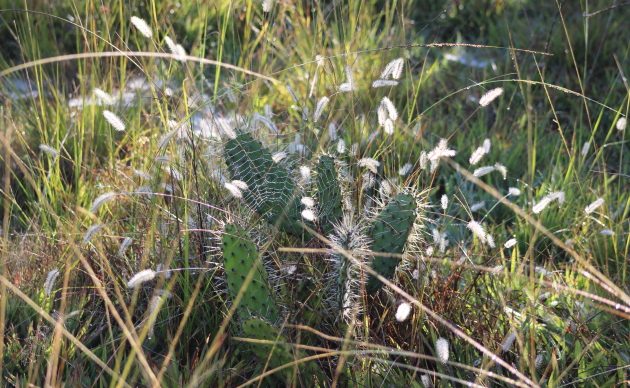 Backlighting is often the bane of my bird photography efforts. But on this particular morning, it perfectly suited the delicate grasses and dew-covered spiderweb of this scene from just behind our church.

Speaking of backlighting… My son and I were driving down a highway in the Mexican state of Veracruz, when I happened to see a large number of Crested Caracaras landing on this enormous tree to roost. There are at least 25 Caracaras in this photo. I’m guessing more were on the way, but a few minutes more and there wouldn’t have been enough light for a photo.

Last year, we had our first Christmas Bird Count in Michoacán. We started the day at over 6,500 feet in altitude, on what turned out to be the coldest day of the year. The below-freezing temperatures and proximity to Lake Pátzcuaro resulted in a dense fog, which produced this literally “atmospheric” photo of a Broad-billed Hummingbird. 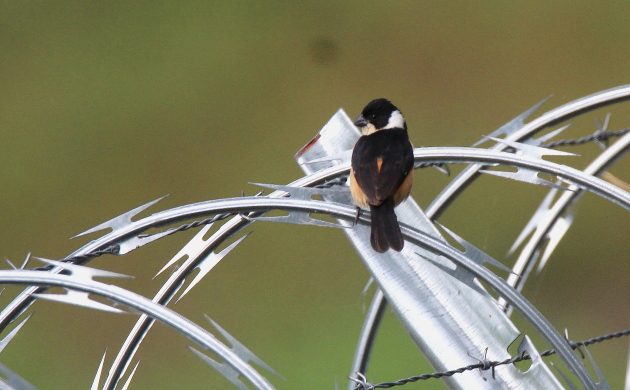 Here is another delicate bird on a harsh perch: a Cinnamon-rumped Seedeater on the razor wire that surrounds the Cuitzeo sewage treatment plant. 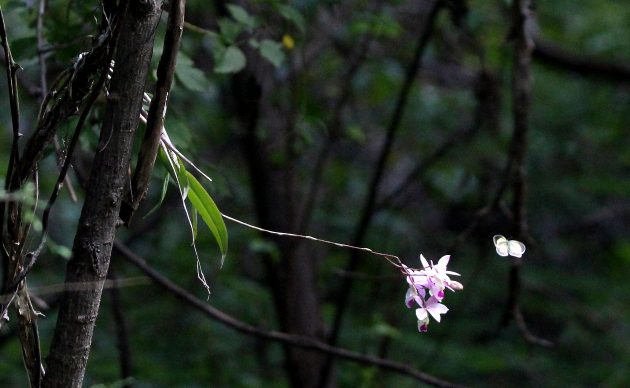 I love orchids almost as much as I love birds, and am always thrilled to find them blooming in the wild. But the Barkeria orchids in Paso Ancho, Michoacán, are especially amazing to me, because they bloom in dry, hot tropical thorn forest. I also appreciated the butterfly that “photo-bombed” this image. 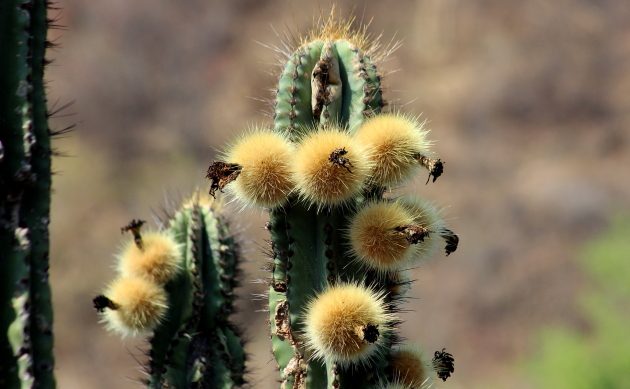 To give you an idea of how odd the Barkeria’s habitat is, this cactus can be found only a few yards away. Cactus fruit, anyone? 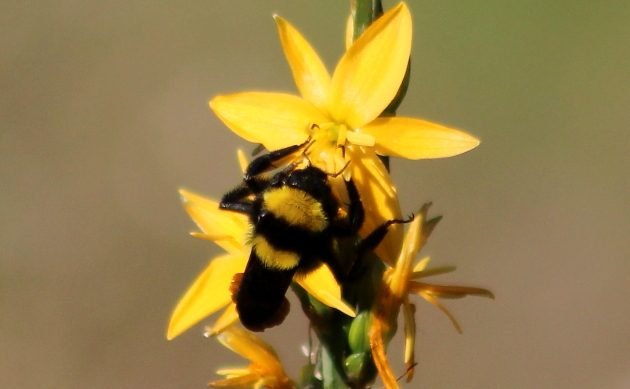 I find the shape of this bumblebee oddly lobster-like. But I love how its colors match the waxy flower it chose. 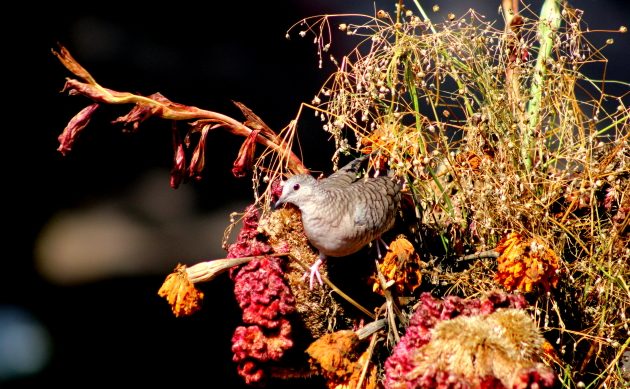 This photo requires a bit of backstory. I had decided to try birding in Morelia’s municipal cemetery, and saw this Inca Dove working its way through the dried flowers above a grave. Life goes on, I suppose. 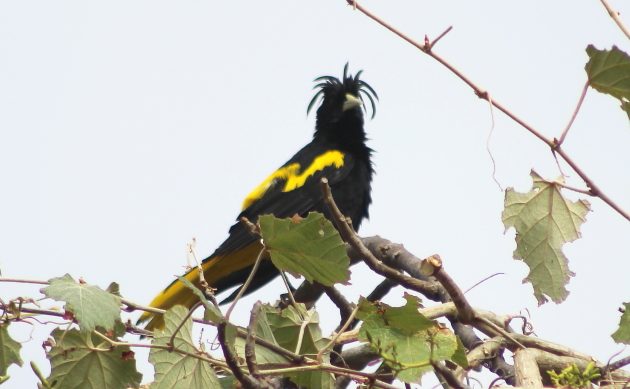 Again, not one of my best photos. But you should all have a chance to see, at least once, a Yellow-winged Cacique in his Sunday-best mating plumage! Sort of like the classic Steve Martin character: the guy who thinks he’s so cool, when he is really rather ridiculous. When they are not mating, they skip the silly headdress. 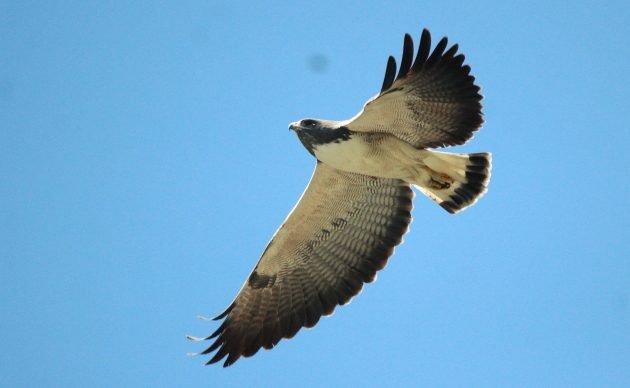 And finally, a photo I took at a balneario, which is a tourist complex with thermal swimming pools, on the outskirts of our city. There is an enormous eucalyptus tree in the middle of the complex, on which a pair of White-tailed Hawks nest every year. We go to hold baptisms there, but you can be sure I always take my camera for the birds, as well. Good thing, right?