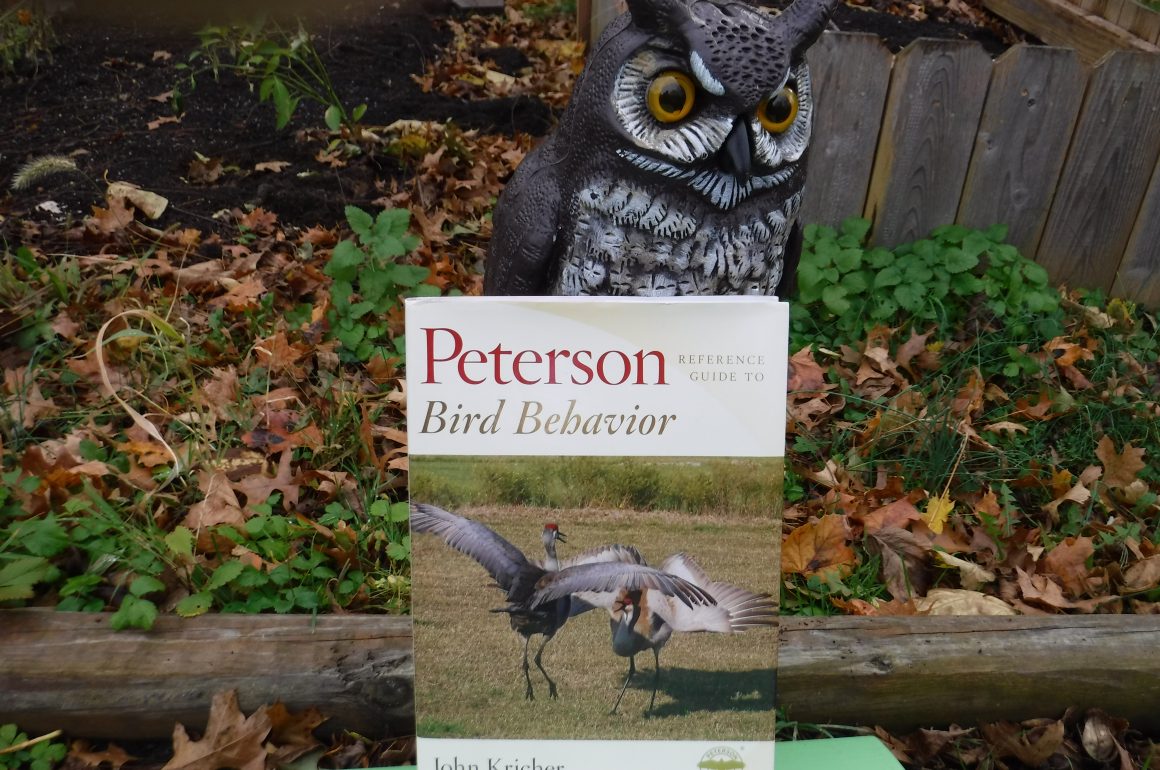 This year has been bountiful in books about bird behavior (reference and otherwise) from the likes of David Allen Sibley, Helen Macdonald, Jennifer Ackerman, Wenfei Tong, and others.  The latest is the encyclopedic and delightful Peterson Reference Guide to Bird Behavior, by John Kricher.

What do we mean, anyway, by bird “behavior”?  How, to humans, is “behavior” separate from the bird itself?  Other than purely physical things (e.g., feathers, nictating membranes, muscular cloacae, etc.), isn’t “behavior” synonymous with “life” itself; isn’t the title of David Allen Sibley’s 2001 tome (also encyclopedic, also delightful), The Sibley Guide to Bird Life and Behavior, redundant?

Maybe, maybe not.  Kricher defines behavior as “the perceptions, reactions, and choices a bird makes daily.” Purely physical details, such as those found in a trayful of Oriole skins in a museum or a university  ornithology department are important, but much of the orioleness is missing from them, says Kricher – their propensity, for example, to pound on windows in mating season.  It’s an adaptive necessity to challenge a perceived invader right now – it takes only seconds for most birds to mate, so a territory holder, like this one, below left, can’t allow another male to linger: 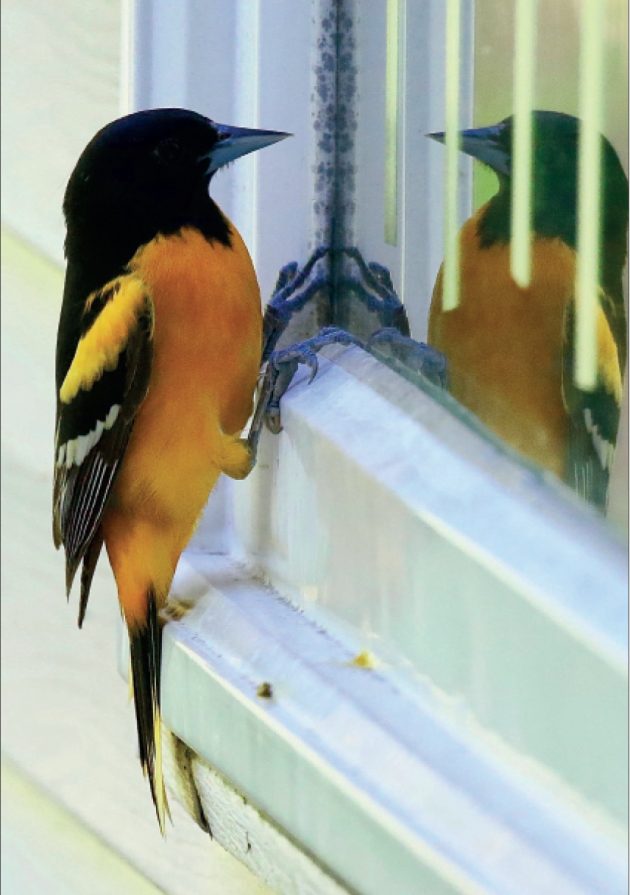 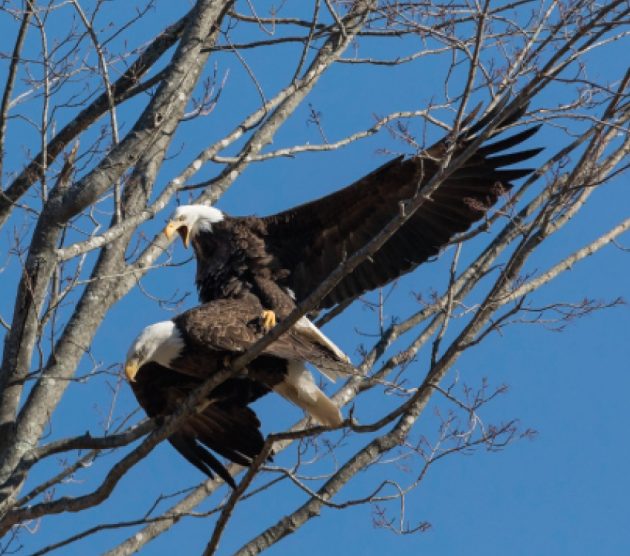 But phenotype and extended phenotype (physical appearance and behavior) – are inextricably bound, and much of Kricher’s book addresses the former.  The structure of wings is addressed in Chapter 8, “Feathers and Flight.”   Among their other uses, wings are also employed for balance during copulation, a not unimportant or inconsequential usage, as the male Bald Eagle ably demonstrates in the photo, above right.

Other chapters (there are sixteen in all) cover every aspect of birds’ lives:  their brains, diversity, migration, annual cycle, nesting, molting (during which Cardinals, like this one, lose almost all of their head feathers) and otherwise. 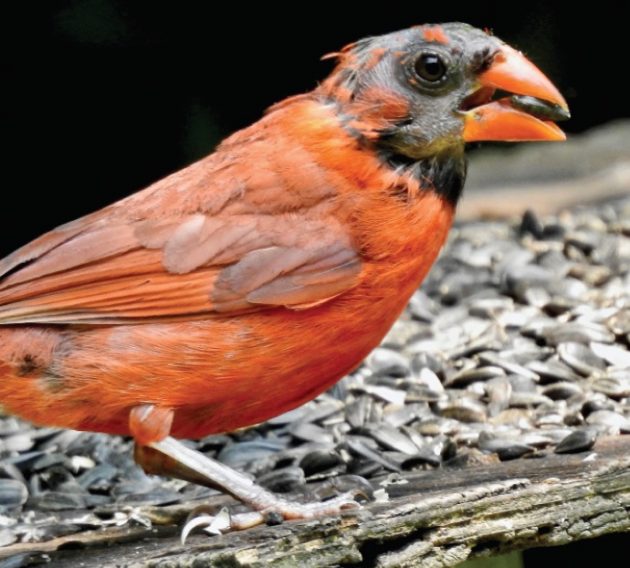 Some avian behaviors are quite reminiscent of ours, especially the agonistic ones.  (“Agonistic” is a word of which Kricher is fond; I had not known it before; apparently it is used mostly in the zoological context; in future I intend myself to try to use the word often, at least once a day — although needless or excess use of obscurity or arcana is itself, of course, an agonistic act.)

For example, ritualistic displays of aggression and appeasement, of coming to the brink and then backing off, are common in humans and, probably, all animals.  This photo of Great Blue Herons says all that need be said in explanation of how it works: 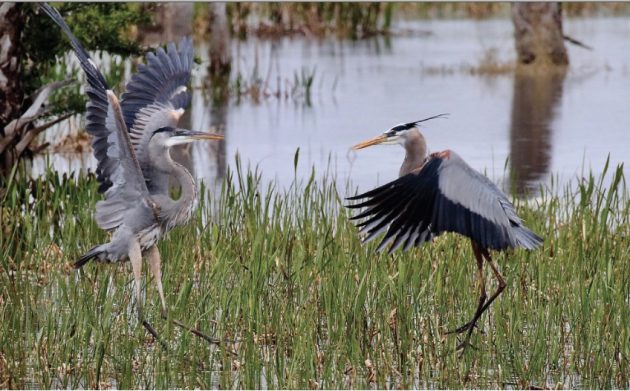 But it is also interesting to know, via Kricher’s good discussion, that birds engage in “displacement” activities – like the gull who, torn between elevating the threat and retreating, abruptly begins “pulling out tufts of grass with great intensity.” Or the soft “whisper” song of the Painted Bunting (and other birds) used to intimidate a rival male.  Again, both these behaviors seem quite human — or maybe our equivalents seem quite avian.  One or the other.

There are different ways to illustrate a bird book; one can be partial to the exquisite watercolors that Sibley uses (in his 2001 book, and others) and still admire the superb photographs that Kricher provides — one, seemingly, for every point he makes in the text.  Especially valuable are those that show things that the average birder would be hard-pressed to see in the field.  For one example, Kricher explains that birds lack bladders and don’t consume as much water as mammals do; their uric acid is expelled in “a paste-like slurry” that contains both digestive and urinary waste.  As he says, this requires a “muscular cloaca,” such as the one the Puffin, below, is showing off; perhaps that photograph is an appropriate way to end this review: 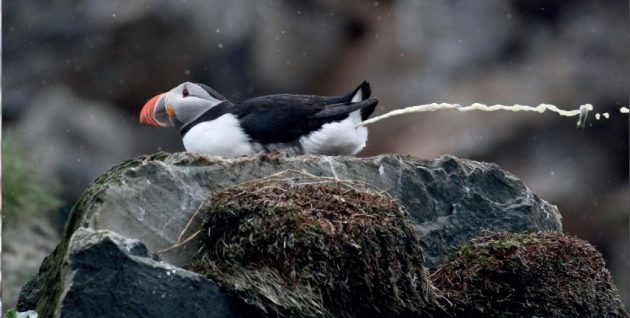 Where Are You Birding This Third Weekend of October 2011?