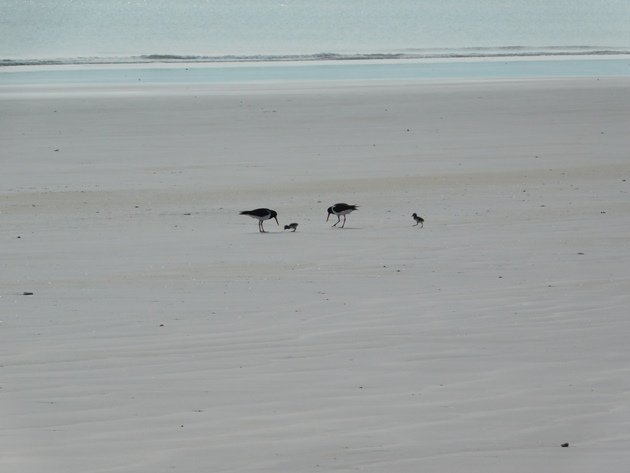 In another year when time stands still when you are not allowed to move freely around Australia or overseas some things happen like clockwork. Well, not quite like clockwork, because this year one pair of Pied Oystercatchers on Cable Beach laid their first clutch of eggs a bit earlier than normal. This year the first clutch was laid at the end of May and this is the first time we have had eggs laid in May along Cable Beach since 2000. This pair of birds, which we presume to be the exact same pair, has been laying eggs in this area since 2008.

The eggs hatched out around 20th June after 28 days of incubation and the Pied Oystercatcher family were soon on the move. The strategy of this pair of Pied Oystercatchers is to lay their eggs in a dune area which is amongst the busiest area for vehicles on the beach. However, they immediately move the chicks north once they are a day or two old. This moves the family closer to a reef that gets exposed on low tides and better feeding opportunities. The walk over two kilometres is done over a few days. Another pair of Pied Oystercatchers to the south does the same thing, but move their chicks south to a reef to feed and hide.

Usually the first thing we look for when we visit Pied Oystercatcher families is look for footprints. Sometimes the chicks are well hidden in the vegetation if the tide is in. If you find recent footprints in the sand then you don’t need to actually sight the young, because there is fresh evidence that they are alive and well.

Adult Pied Oystercatcher and two chicks’ footprints in the sand

Last Saturday, 26th of June, we walked north on Cable Beach. We walked about 3 1/2 kilometres north of the rocks to find the family of Pied Oystercatchers feeding together on the wet sand. The chicks stopped every now and again to rest and no doubt digest the large amounts of food they were being fed by their parents. The food consisted of very small bivalves, which are plentiful in that area.

There is a large influx of tourists to Broome at this time of year from the southern colder climes of Western Australia. The beach can resemble a car-park when the tide is out, but this far north the vehicles do thin out. When a vehicle approaches the Pied Oystercatchers run to distract the driver from the area where the chicks are and this can leave them very vulnerable. On an open beach at low tide the Pied Oystercatcher chicks have nowhere to hide when the tide is out. The best they can do is make a run for the vegetation at the top of the beach or huddle down in a tyre track.

As with every year we were concerned about predation of these vulnerable Pied Oystercatcher chicks. There are numerous species of raptors around Broome including Black Kites and Whistling Kites. We have observed Pied Oystercatcher parents chase of White-bellied Sea-Eagles and unfortunately there are feral cats and feral foxes have become more prevalent too.

On July 1st we walked north in the afternoon to see how the Pied Oystercatcher family were doing. The tide had made it harder for vehicles to access the beach that day, so it was much more enjoyable. However, the news was very sad. Once again we had lost our first Pied Oystercatcher chicks of the year. The adults were feeding on the edge of the ocean alone. There was no alarm call and the loss of chicks is something we have become very familiar with over the years. We can expect another clutch of eggs in about ten days and another twenty eight days of incubating.

Meanwhile, the other pairs of Pied Oystercatchers along Cable Beach have begun to breed as well. It can be quite a rollercoaster ride this time of year as we see new life and then it is lost. We rarely know the exact cause of the loss.

There have been some success stories over the years and last year there was one such event. I have written a lot about the Pied Oystercatchers along the coast of Broome since 2010 and you can find posts via this link.