When Daisy started talking about a family trip to Maine for the long Memorial Day Weekend I had one thing on my mind: puffins! Atlantic Puffins are easier to see, and see well, in Maine than anywhere else in the United States. Fortunately, just like when we visited Washington State, Daisy was amenable to taking a boat ride to see some puffins so on the evening of Saturday, 27 May, we (me, Daisy, Desi, and my mother-in-law) found ourselves on a boat in New Harbor watching Black Guillemots swim in the harbor while we waited for our boat to head out to Eastern Egg Rock.

Eastern Egg Rock is a tiny, rocky island well within site of the Maine-land. For nearly a hundred years, after the eggers, meat-hunters, plume-hunters, and a human-influenced gull population boom, puffins were absent from the island. They were reintroduced to Eastern Egg Rock starting in 1973, with over a thousand young transported from Canada over several years. It was the first seabird colony to be restored and when Atlantic Puffins starting breeding on the island again in 1977 it was the first time since 1885 that puffins had bred on Eastern Egg Rock. Now there are over one hundred pairs nesting on the island again and there is a thriving tern colony once again as well.

The boat we were on was operated by Hardy Boat Cruises, one of several that do puffin tours along the Maine coast. It was well-narrated by a National Audubon Society Project Puffin staffer and the entire goal of the trip was, not surprisingly, to bring the masses to see the puffins. The boat we were on was full and they often are so if you are planning a trip to Maine you probably want to make reservations early.

From New Harbor it is only six miles to Eastern Egg Rock and the ride goes quickly. I spotted two puffins on the way out though they were distant and took off before we got close. Fortunately, with the island being a breeding site we didn’t have to worry about those two that were likely foraging, as puffins tend to hang around their breeding island, especially in evening, and we wouldn’t have a problem spotting some more.

But before we got into the puffins there was another alcid that stole the show, a Razorbill! 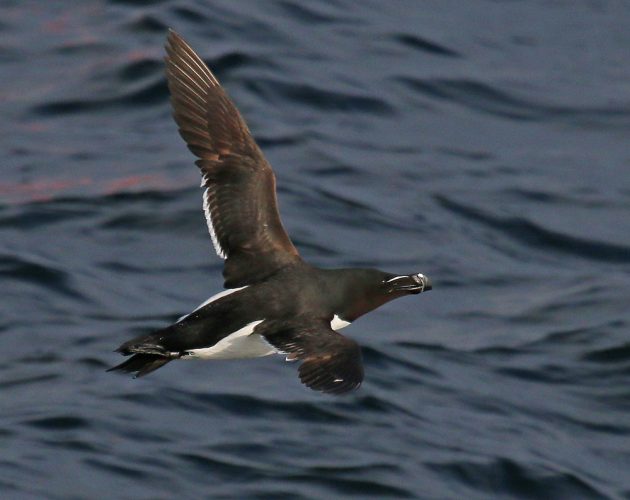 This Razorbill was awesome. We saw it at a distance and it took off, flew completely around the boat and then halfway around again before disappearing. We spotted it again later on and got good looks for a second time but nowhere near as good as the first pass. Also, it’s banded! Sadly, and not surprisingly, I’m unable to get the numbers off the band. 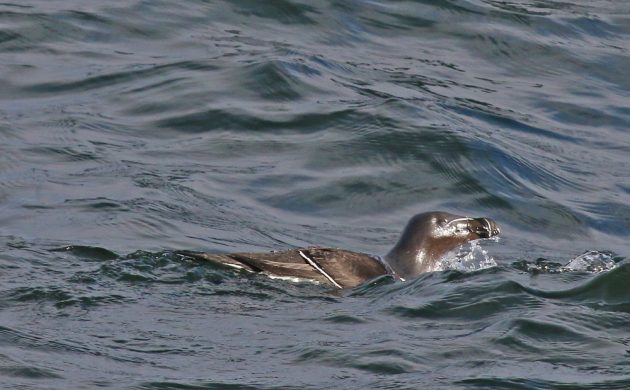 Hear you see the Razorbill emerging, using its namesake bill to cut through the water.

Also impossible to ignore was the sheer number of Black Guillemots. Hordes of these delightful black-and-white beauties were present and I did not get tired of photographing them. Though I had seen guillemots a couple of times before I had never seen one in breeding attire and I was smitten. 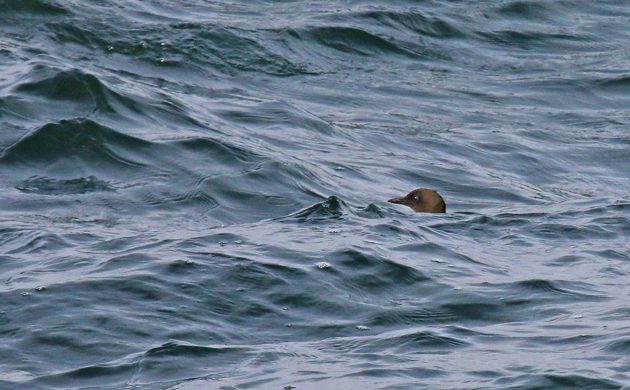 Most of our looks were much better than this. 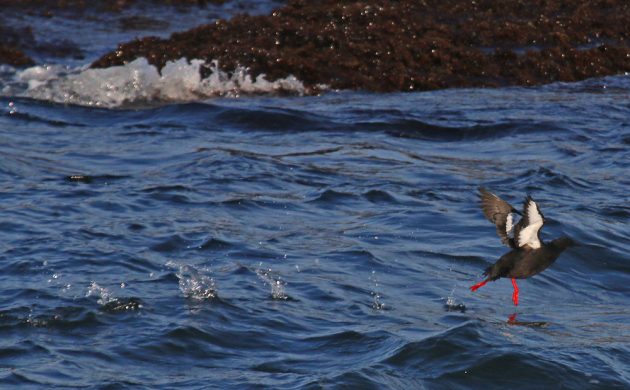 Like all alcids, Black Guillemots need to expend some effort to get off the water. 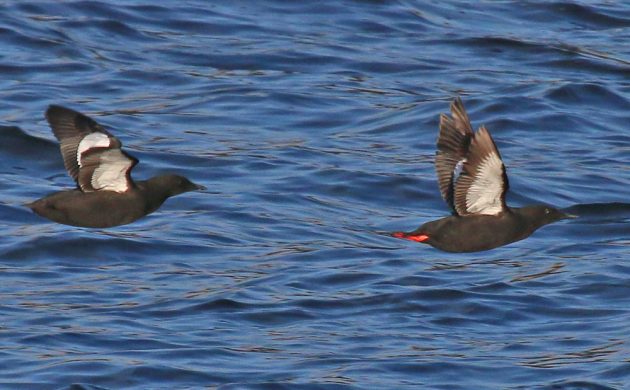 A legless guillemot? A female that didn’t feel like she needed to use her sexy pink legs to attract a mate? Or perhaps it’s just a bird with cold feet? 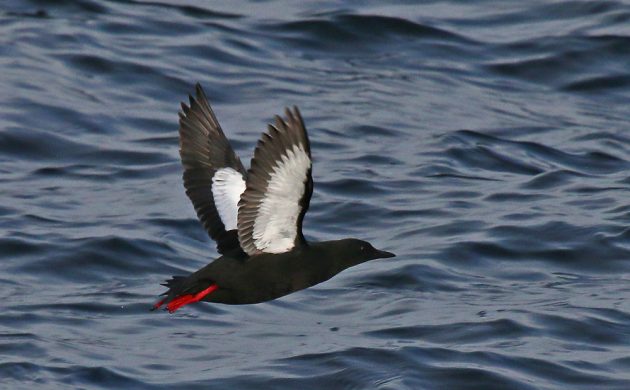 Black Guillemots are awesome. That is really all I have to say about them.

And, sure, we looked at the Common Eiders and Purple Sandpipers and Laughing Gulls and Common Terns (a few Arctic Terns too) but no one was on the boat to see those birds. (And likely no one reading this is hoping for a Purple Sandpiper picture.) No, we were all on a boat in the cold north Atlantic for one reason and one reason only. PUFFINS! 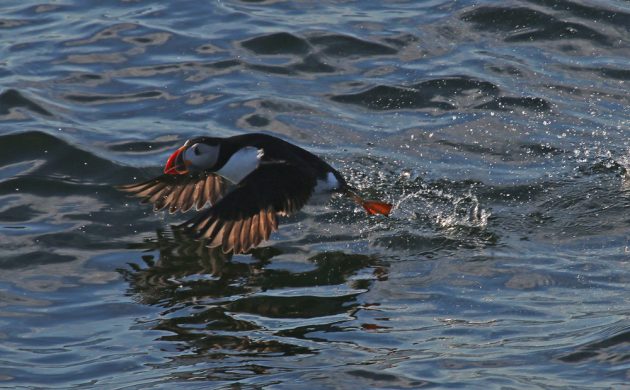 The light was against us for this shot but I kind of like how it came out. Puffins, like guillemots, struggle to leave the water behind. 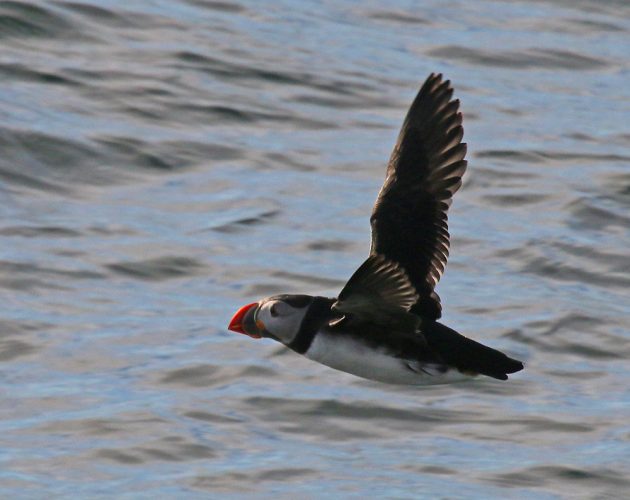 Look at that freaking beak! Desi kept mis-speaking and calling them toucans but, really, can you blame him? 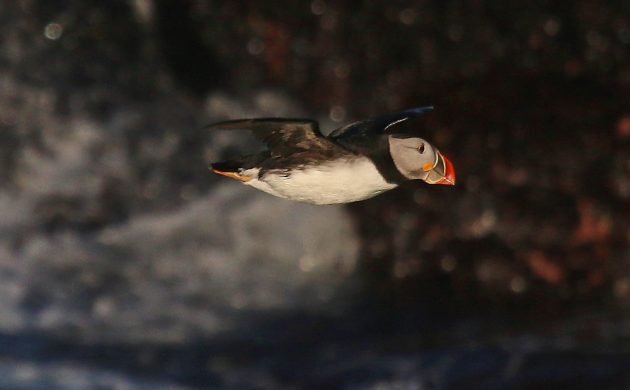 And, just before we headed back to the dock, we had a perfect, close, fly-by in amazing light. Aaaahhhhhh…

If you decide to go on a puffin cruise in Maine in May remember that though the air may seem warm that the ocean is still cold. Bundle up, bring your binoculars, and be prepared to see comical and confiding puffins. It was an experience I won’t soon forget, and neither will my poor, frozen family. (We all survived and revived with warm chowder at Shaw’s Wharf Restaurant, from where the boat departed.)