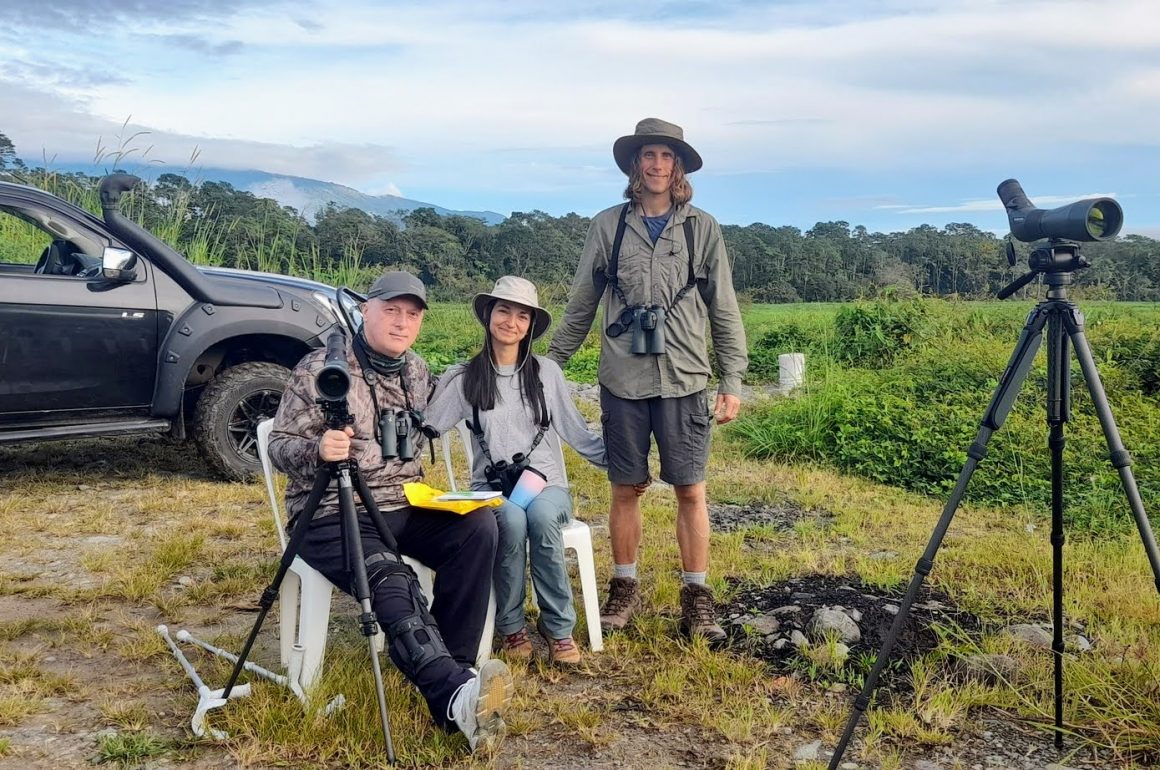 After a heavy pre-dawn rain, the morning was all misty and mysterious. I was greeted by omnipresent Grey-headed Chachalacas running with such a focused determination, resembling those small, green procompsognathus dinosaurs (“Compys”) in Jurassic Park and making me think that the CGI experts must have been sitting at this same veranda studying Chachalacas’ moves.

Blue flanks, black chest, yellow head… I am in the birders’ heaven called Rancho Naturalista Lodge in Costa Rica and am observing my first Golden-hooded Tanager of the trip. Located within its private premontane forest reserve at 3000 ft / 900 m a.s.l. inside middle elevations of the Caribbean foothills biome, the lodge has four trails ranging from 0.4 mi / 500 m (Pepper Road) to 1.6 mi / 2.5 km (Manakin Trail). Within 140 ac / 60 ha of Rancho Naturalista’s Reserve, there are 500 bird species – or 55% of the nation’s total! 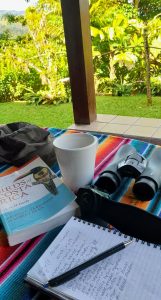 While I already visited Costa Rica once, I do not feel overly-confident with its birds. Yet, with a coffee in one and binoculars in my other hand, the long ago learned lessons started to return. I either knew the birds I was seeing, Collared Aracari, or White-necked Jacobins chasing Rufous-tailed Hummingbirds away, then White-crowned Parrot, Clay-coloured Thrush, Olive-backed Euphonia, Blue-grey Tanager… or I was easily IDing them on my own: Black-cheeked Woodpecker, Baltimore Oriole, Blackburnian Warbler, Crimson-collared Tanager, Scarlet-rumped Tanager. There was that one that I remembered from my first sighting in Selva Verde, a black-and-red thrush-like bird that I also remembered to be so poorly depicted in a field guide that IDing it from the book was practically impossible.

And then Rancho’s in-house guide, Harry Barnard (cover photo, standing), came around with a mug of steaming coffee to confirm my unspoken, tip-of-the-tongue suspicion: yes, it’s a Red-throated Ant-Tanager. Born in England and looking like a young Roger Daltrey of The Who in the film version of the rock opera ‘Tommy’, Harry came to Costa Rica for the first time as a teenager, on a bird tour with his parents. Among other places, they visited Rancho Naturalista. Some years later, he returned to Rancho for a few months as a volunteer. That is when he first met Mercedes.

I am taking a sip of coffee, my eyes following an impossibly colourful Kill-Bill (Keel-billed) Toucan, flying against the background of the Irazu Volcano slopes and, farther to the right, water-vapour ‘smoking’ Turrialba Volcano on the horizon. Around me, White-necked Jacobin bullies were attacking any Crowned Woodnymph, Green Hermit, Violet Sabrewing or Bronze-tailed Plumeleteer that would dare to approach the feeder or the Verbena hedges. And Verbena attracts another specialty bird and a regional endemic (from Honduras to Panama), the Snowcap. Tiny hummingbird, hued like red wine and with a bright white cap, it usually appears for a short period of time and is easily overlooked!

More easily noticeable birds to observe from the veranda also included Gartered Trogon, Lesson’s Motmot (often the very first and the last bird of the day), Crimson-fronted Parakeet and Streak-headed Woodcreeper. Once a Peregrine Falcon flew above the veranda, while several distant King Vultures were soaring above the valley. Should I add, the foliage in front of my casita (bungalow) window was regularly checked by White-collared Manakin. 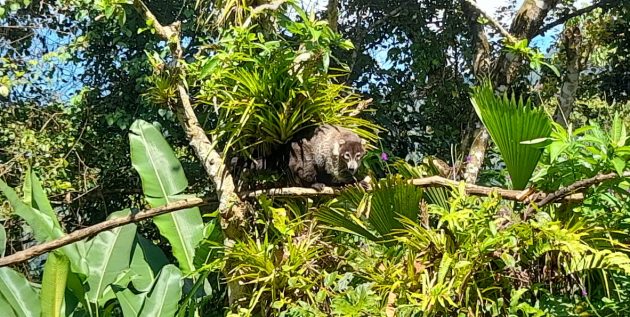 But I am talking birds only! Quite a few mammals come out in the open to steal bananas left for the birds. The commonest among them were Variegated and Red-tailed Squirrels (up to half a dozen each), Central American Agouti (1 or 2), White-nosed Coati (above – by phone: a fatty who broke down the feeder tray it was climbing onto), followed by uncommon Dusky Rice Rat (to us from farther north, it looks more like a cute fat mouse than a rat we are familiar with), with even a banana-eating Tayra coming to the feeder (large representative of the weasel family), and, apparently hardest to spot because of its nocturnal ways, Northern Raccoon coming out in the open only a few metres from me (while it may be merely a nuisance to North American guests, I am from Europe and this one was a lifer to me!). 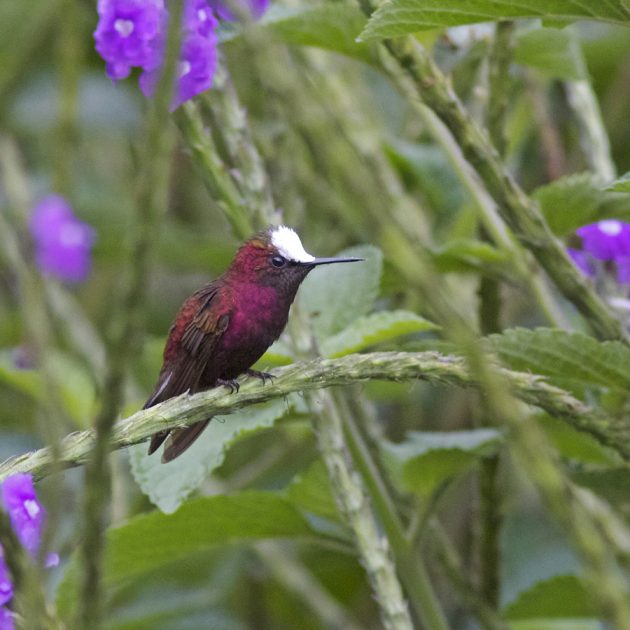 Downhill from the main lodge, but within Rancho Naturalista Reserve, lies Rancho Bajo with a lot of flowering trees and additional Verbena hedges, attracting Green-breasted Mango, Green Thorntail, both Black-crested and White-crested Coquettes, Crowned Woodnymph and even more Snowcaps, in case you missed them uphill! Add Common Tody-Flycatcher and several Hoffmann’s Woodpeckers and Brown-hooded Parrots to that picture, among many others.

My other guide, Mercedes Alpizar, grew up near the Rancho in the Turrialba area, graduated in Ecological Tourism and studied English at the University of Costa Rica. She started guiding at Rancho in 2016, only to embark upon a Costa Rica Big Year in the next, 2017. Why go that far?

Because of the inner passion that drives her, but on a more rational scale that is likely the best way to kick-start one’s guiding career. I met Mercedes during her Big Year, when she was that bright new guide at Rancho Naturalista. Yet, scoring more than 700 species, Mercedes Alpizar soon became “Meche”, the bird guide that we are all familiar with.

But that is not the thing I wanted to tell you. Mercedes and Harry were both guiding at Rancho for some time, but there were no sparks between them. Now, this is not how they told me the story, but how I see it. Use your own judgment to decide should you trust me or not.

By doing her Big Year, without a plan, Mercedes also performed the ultimate female display, excelling in Harry’s own line of work, even more, in Harry’s way of life. How could she not impress him? How could he possibly remain blind to her? Did you know that Annie Oakley, an American sharpshooter who starred in Buffalo Bill’s Wild West show, outgunned a professional sharpshooter – and then married him? And yes, sometime in 2018, Mercedes and Harry started dating. Now, they are happily married.

Even farther downhill, at the very edge of the Rancho Naturalista property, there was a Sunbittern waiting for me. Observing it from a close range, I thought “it would be nice if you’d spread your wings now” and the cooperative bird fulfilled my request, taking a short flight upstream.

Next: birding near Rancho Naturalista 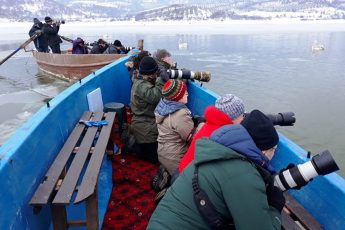 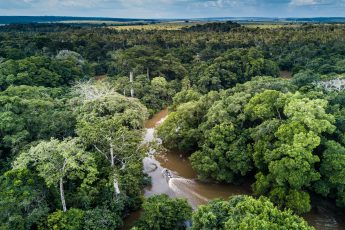