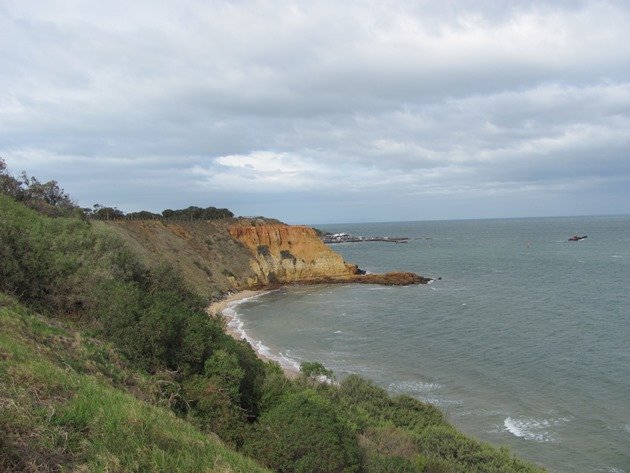 Although we have now returned home to Broome and beautiful hot dry weather, which we were really missing the last few weeks, we were able to take a coastal walk together just before we left Melbourne. With only a few days to bird together before we came home we had to ignore the weather and head out wrapped up and hope the promised wet weather would not catch us out! I had walked from Melbourne to Beaumaris on what was to be the last day of warm weather as winter fast approached and we decided to walk part of that coastal trail and then venture further south into unknown territory. The weather was particularly cold when we took the train to Sandringham to start our walk south and we wore several layers of clothing, waterproof layers and carried a hot drink. It was one of those days that if you look in the right direction it does not look too bad and then you look in the other direction and you question your sanity! The view above is looking south towards Red Bluff, which is not the perfect blue sky from my last visit. Below is the view looking towards the city of Melbourne, which is about 30 minutes away by train. No doubt many people have the dilemma with the weather when they go birding around the world, but deep down you know the birds will still be out there and you can get a hot bath at the end of the day. Looking towards Melbourne from Sandringham

Looking back towards the city of Melbourne we could see the West Gate Bridge, which is very close to West Gate Park. I had visited the park alone in early March and then with Grant later in the month, where we had our Tiger Snake encounter. We walked along the coastal trail rather than along the promenade or beach, because that way we were sheltered from the fine drizzle that soon reached us. We had Welcome Swallows, White-browed Scrubwrens and Silvereyes flitting through and numerous Spotted Doves. The Spotted Doves were looking how we felt….cold! The weather continued to get duller, colder and more miserable as we continued south and the Grey Butcherbirds did look “grey” like their surroundings. The trail took us closer to the sea as we approached Black Rock and there were several Hoary-headed Grebes bobbing about on the waves. This looks odd to us, because we are used to seeing them on fresh water lakes. They are well adapted to both environments and were soon diving below the surface in search of food. At Black Rock the sea was very rough and there was a lot of seaweed and debris washing in over the wall. The wharf was a good roost for Little Pied Cormorants and Silver Gulls. We continued south to Ricketts Point and it was completely different from my previous visit in April. The tide was in and the weather was wet and cold. The birds were roosting on what rocky outcrops were available and were not keen to leave the protection of the taller rocks. Pacific Gulls, Silver Gulls and Crested Terns favoured one rocky area and tried to shelter from the worst of the weather. The next rocky outcrop was busy with Australian Pelicans that appeared to have no intention of showing their bills due to the miserable weather. Crested Terns, Silver Gulls and Little Pied Cormorants were also present and a flock of Common Starlings. The Common Starlings are often found on seaweed areas along the coast near Melbourne and can be seen in the lower left of the photograph below. Apart from the Hoary-headed Grebes in the sea around Ricketts Point there were only four Black Swans. I had observed a lot more on my last visit, but that was a few weeks earlier when the weather and sea conditions were completely different. One of the Black Swans was wearing a neck-band and was no doubt banded at Albert Park along with many others over the past few years. As we rounded the corner at Beaumaris we observed several Australasian Gannet out at sea diving and we continued south concerned about the weather that was becoming even less favourable for walking along the coast. Near Mentone we observed a Crested Tern struggle and finally land on a structure along the sea’s edge and it had no intention of leaving its roost with the storm that was fast approaching. Looking out to sea we had every reason to move faster as we followed the promenade south and as we passed the area around Parkdale it became harder to enjoy coastal birding around Melbourne in May! In fact we didn’t quite make it to the pier at Mordialloc, but made a dash for the train station and admitted defeat! Coastal birding is enjoyable in most weather, but sometimes you just have to admit that it is too cold, too wet and not even the birds look like they are enjoying the experience! So, back on the warm train at Mordialloc and back to the city in about 45 minutes and into a hot bath!

Where Are You Birding This Third Weekend of February 2019? 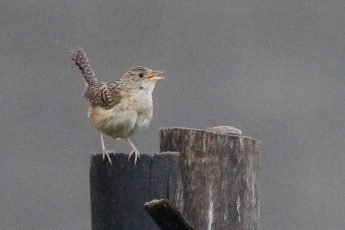 Lifer! But, which one? 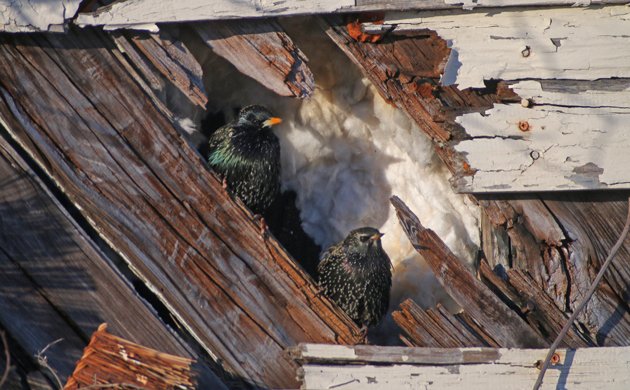