It was birdy this morning on the banks of the Hudson River in lower Manhattan. I’d seen nine warbler species, Baltimore Orioles, a brilliant Scarlet Tanager, and what seemed like dozens of catbirds when an odd warbler caught my eye.

The mystery bird looked something like a male Blackpoll Warbler in alternate (breeding) plumage, but it was yellow and black instead of black and white. Here’s the bird at the same angle as above, a sharper image, but with part of the bird’s face obscured. Here’s what I observed in the field and documented photographically:

So what’s going on here?

A hybrid seemed like a reasonable possibility at first — but a hybrid with what? Assuming one parent was a Blackpoll Warbler, I ran through possibilities like Magnolia, Blackburnian, and Cape May, though none of those quite made sense. Some sort of aberrant plumage on an otherwise pure Blackpoll was another possibility I was pondering.

Once I got home and started poking around, I realized the similarities between the bird I saw this morning and John James Audubon’s “Carbonated Warbler,” a bird that has never been identified with certainty (see Carbonated Warbler print and Audubon’s description). Not all the details fit, but David Sibley described some of the reasons that work should be taken with a grain of salt.

I also found this 1995 account of a warbler in Minnesota that bore similarities both to the bird I saw this morning and to Audubon’s Carbonated Warbler, to which the Minnesota observers compared their bird. They described the bird they saw as entirely bright yellow beneath; the bird I saw today had a white undertail coverts and a white lower belly. They also described a solid black cap all the way down to the bird’s eye, whereas the New York bird had a yellow arc over the eye and a contrasting eye line.

Meanwhile, I had tweeted a photo of the New York City warbler, and American Museum of Natural History’s Paul Sweet suggested it might be a “Blackpoll with some aberrant molt.”

Upon close review of my photographs and some additional research, that theory makes sense to me. With a couple of well-known exceptions, hybridization among wood-warblers is apparently quite rare. This means we should consider the possibility of some unusual plumage variation carefully before invoking the “h word.” And the more I look at this bird, the more it really does look like a cross between a bright basic Blackpoll plumage (like this one) and a male alternate plumage.

As for the Minnesota bird from 1991 and Audubon’s “Carbonated Warblers,” is it possible that a rare aberration in Blackpoll Warbler plumage or molt sequence can explain these birds, and similar sightings? (The Minnesota observers note that “there have been occasional sightings of warblers with plumage combinations such as a black cap and yellow underparts suggestive of a hybrid Blackpoll.”) Of course, there doesn’t have to be only one explanation for all of these observations. Brothers Anthony and Paul Hertzel, who documented the Minnesota bird, wondered if their bird could have been the offspring of a Blackpoll x Wilson’s Warbler pair.

At present, I don’t see any reason to invoke such an explanation for the bird I saw this morning, but I’d love to hear additional ideas and opinions on this bird and the topic in general. A couple more poor quality photos follow, in case they reveal any useful details. Here are a few photos from elsewhere on the web showing how much variation is possible in Blackpoll Warblers in April and May: 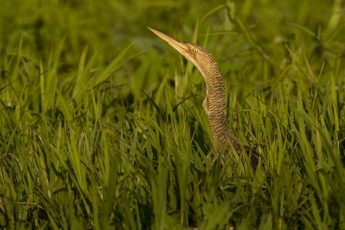