Shorebirds on the East Pond of Jamaica Bay Wildlife Refuge 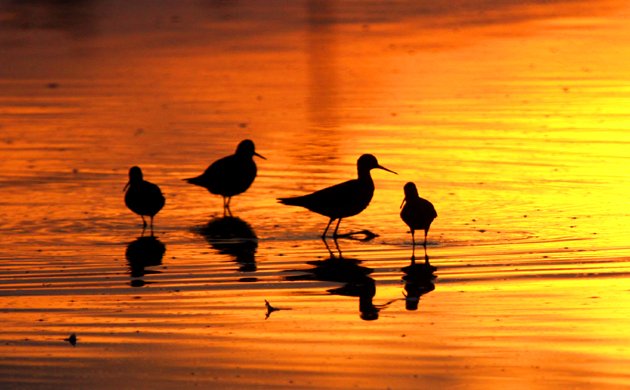 If I had my druthers I would be birding the East Pond of Jamaica Bay Wildlife Refuge pretty much every day from July until September. But, you know, job, family, and all the other responsibilities of being a social animal means that, at best, I get out onto the East Pond once a week to see what shorebirds are stopping over on their way to their wintering grounds. That once a week this year has been entirely on the weekends and entirely in the early morning, which is nice because very few people are out on the pond, but not so nice because so far this year high tide has not corresponded with sunrise a single time that I have been out there. (The shorebirds tend to flock to the East Pond when the tides force them off the mudflats.) Fortunately, as the image above shows, there are some rewards to being out and about in the early morning light.

Despite my visits being limited in number and scope I have still enjoyed my visits to the East Pond. Shorebirds are shorebirds and even when a jaw-dropping rarity does not appear it is still nice to see flocks of peeps evading a Merlin or a Peregrine Falcon, the feeding strategies of different species, and the gorgeous plumage of the juveniles. Juvenile Short-billed Dowitchers are among the most handsome of young shorebirds. Another “fun” thing to do is to stare intently at a Semipalmated Plover for a couple of minutes and then tell other birders that you were sure that you didn’t see the webbing between its inner toes. If you ever meet someone who tells you that they like looking for a rarity by sorting through frantically foraging peeps, like the Semipalmated Sandpipers above, step away from them quickly because they are either insane or stultifyingly boring. Before you know it they will be smearing themselves with their own feces or prattling on and on about remiges and feather wear. Anyone who tells you that it is difficult to tell a Lesser Yellowlegs from a Greater Yellowlegs hasn’t studied enough. That said, I might have made an embarrassing call involving those species once or twice. The Stilt Sandpiper is a bird that I always forget exists until mid-July. It’s a shame because they are pretty nice birds and when I remember they exist I greatly appreciate that fact. (You can click that shot up above to make it bigger. The one below is as big as it gets though.) Aren’t shorebirds awesome? Isn’t Jamaica Bay Wildlife Refuge a great place to see them? Why haven’t you been on the East Pond yet this year? Another gorgeous juvenile bird, this one is a Least Sandpiper in horrible light just before it started to rain.