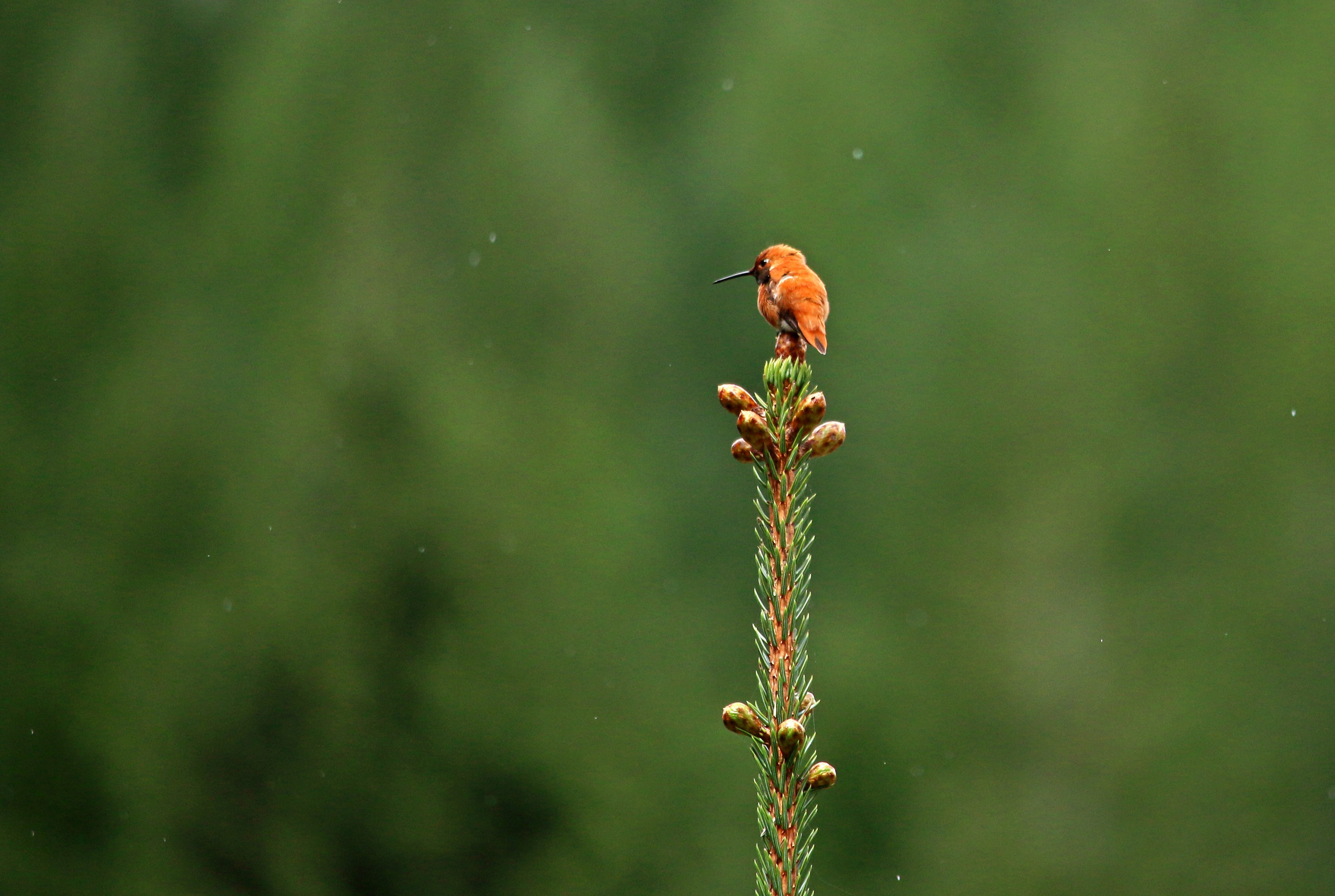 A light rain had begin to fall on the valley between steep slopes that held the headquarters of HJ Andrews Experimental Forest. Patches of blue sky winked at me from behind the mountain peaks, raindrops occasionally obscuring my vision as I glanced upwards. At the edge of the Oregon Cascades, rain is expected, and the researchers and scientists thought little of it as they continued about their daily tasks.

I was visiting HJ Andrews for two days to learn more about their long term monitoring initiatives, and had a few minutes of downtime while waiting for the next foray into the woods themselves. I heard the tell-tale buzz of a tiny but energetic hummingbird, and followed the low tone to a cluster of young pine trees.

At the tippy-top of the tallest sapling a Rufous Hummingbird perched daintily, surveying his kingdom. Found in the Western United States and Canada in the spring and summer, the hummers spend the winter season in Mexico and along the Gulf Coast. Given that they stretch to only about three inches, their migration is one of the largest (proportional to body length) in the avian world. According to the Cornell Lab of Ornithology, “its roughly 3,900-mile movement (one-way) from Alaska to Mexico is equivalent to 78,470,000 body lengths.”

My Rufous Hummingbird appeared unperturbed by the rain drops attempting to drench him. He sat preening, allowing me an extended time period in which to take pictures of him – rare for a hummer. The Cornell Lab of Ornithology also reports that this species has an excellent memory, and it’s possible that this particular bird has returned to HJ Andrews year after year, drawn to the feeder by the front office.

As with multiple other hummingbird species, Rufous numbers are in decline. Since 1966 their populations have plummeted by over 60%, though over 10 million individuals still make their annual arduous migration route. Conservation of both their breeding and wintering habitats is essential to protect this bright light in the dark forest.

« Previous post
The Kung Fu Approach to Birding
Next post »
Where Are You Birding This Final Weekend of May 2018?