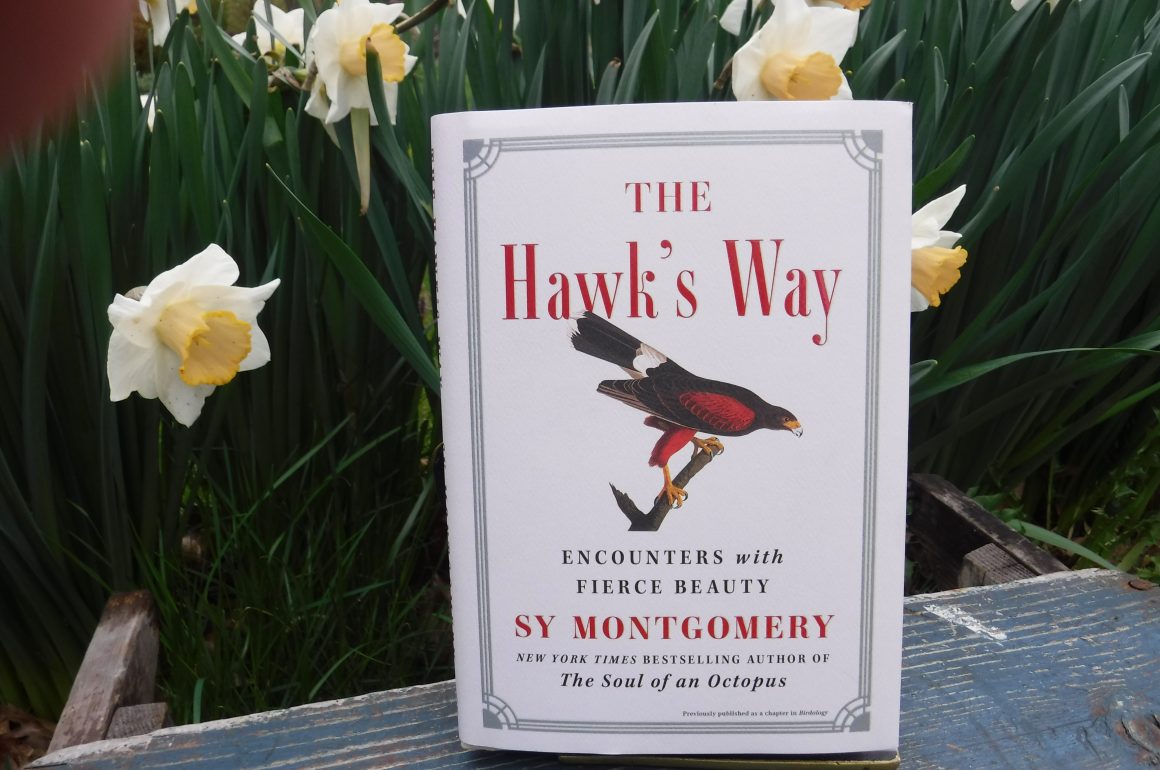 Maybe author Sy Montgomery is right when she says that “birdwatchers often look down on falconry,” and maybe not.  (Some, according to her, consider it a form of slavery; a 1982 book in my library, The Birdwatcher’s Companion cites “the sentimentalist element of the wildlife protection movement” as deeming falconry to be comparable to cockfighting.)

But whatever birders think about falconry, someone is sure interested in reading about it – they’re lapping the stuff up, from Helen Macdonald’s big prizewinning kahuna of 2014, H is For Hawk, reviewed here, and further discussed here, to Big Brother:  A Falconer’s Journey and the Healing Power of Wildlife, reviewed just a few weeks ago here.

The latest volume on the subject is Montgomery’s The Hawk’s Way:  Encounters With Fierce Beauty.  It’s a slim volume, a republication, mostly, of a chapter from her fine 2010 book Birdology, with some added material including an introduction, in which she describes how she has, a decade after her first experience with falconry (as described in the main part of the book), “come back for more.”  Also new in this volume are some nice color photos of raptors, such as these, of a Peregrine falcon named Banshee, and a Red-shouldered hawk in Texas: 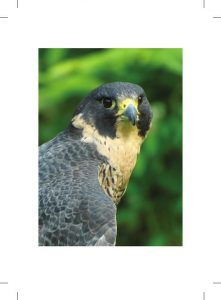 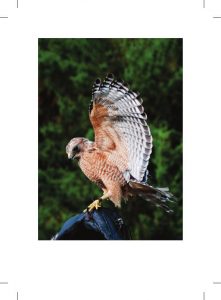 Montgomery’s training in falconry comes via Nancy Cowan, a New Hampshire falconer, and Jazz, a female Harris’s hawk and “the most beautiful bird in the world,” as the author, smitten from the start, calls her.   (She may be right:  see the photo, below, of the author and Jazz).  Harris’s are also, according to Cowan, smarter than other hawks; they hunt in packs and, for that reason, may welcome humans as hunting partners more so than other raptors. [Here’s a good post on Harris’s hawks and their use in falconry, which I found via hyperlink in the second of the book reviews of H is for Hawk, by Carrie, cited in the second paragraph of this review, above.  The post also has, in the appended Comments section, a long colloquy on falconry, mostly pro with some con, well worth a look.]

As Montgomery shows, falconry is different from any other human/animal interaction.  In training, the falconer must never think of rewards and punishments, Nancy Cowan (pictured below, with her Harris’s hawk, Scoter), tells her: “They don’t serve us.  We serve them.” 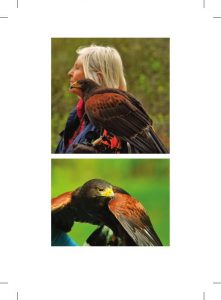 Raptors are “pure savagery bereft of evil,” writes Montgomery with admiration.  They will allow the human, if she behaves correctly, to be the junior partner in the hunting enterprise – nothing more.  The love that Montgomery feels for the hawk and its wildness will never be reciprocated:  a raptor is not a dog or a horse.

In The Hawk’s Way, Montgomery is very good on the ethical dilemmas inherent in falconry, centered on both the bird and the woman, even if she never resolves any of them definitively.  She herself is a vegetarian, one of the sort that mourns even roadkill.  Yet she inures herself to being part of the bird of prey’s intense hunting drive (“yarak” is the term for it) and to such requisites of the sport as providing quail — “innocent and appealing” in their cages — for hunting targets, and the hearts and heads of baby chickens for feed.

In the most poignant (and amusing) point of her training, once she has become serious, her tutor Nancy tells her she must order her own falconry glove, a leather one to protect against the razor-sharp talons of the bird.  She doesn’t hesitate: “I never buy leather, but eagerly I find myself taking down the number for the falconry supply outfitter.

And, to become a full apprentice, she needs to catch her own hawk from the wild.  “Could I do this?” she asks rhetorically – but she never really answers that question.  It’s not clear from the book’s ending, but it sounds like she abandoned her nascent apprenticeship because of her traveling schedule, her marriage, and her own chickens who would certainly be killed if she kept a hawk.

As a writer, Montgomery is reader-friendly – not simple or facile, but with the skill to construct a good story.  It’s a good thing she purchased the leather falconer’s glove, though, because she does tend to wear her heart on her sleeve, as in “I am lost in her pleasure, lost in her beauty, drowning in my love of this bird” and similar stuff.

She is prolific, having written a number of books on the natural world, including the deservedly-popular The Soul of an Octopus.  Her book Birdology covered a number of topics that may or may not be of interest to birders as such – chickens and racing pigeons, in addition to falconry – but it, and The Hawk’s Way, excerpted from it, make delightful reading for those who can put the binoculars down for an evening or two. 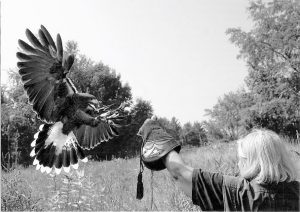 [Color photos in the text of this review are by Tianne Strombeck; the B&W photo of the author and Jazz is by Selinda Chiquoine; the final B&W photo, of Nancy and Smoke, is by Don Himsel.] 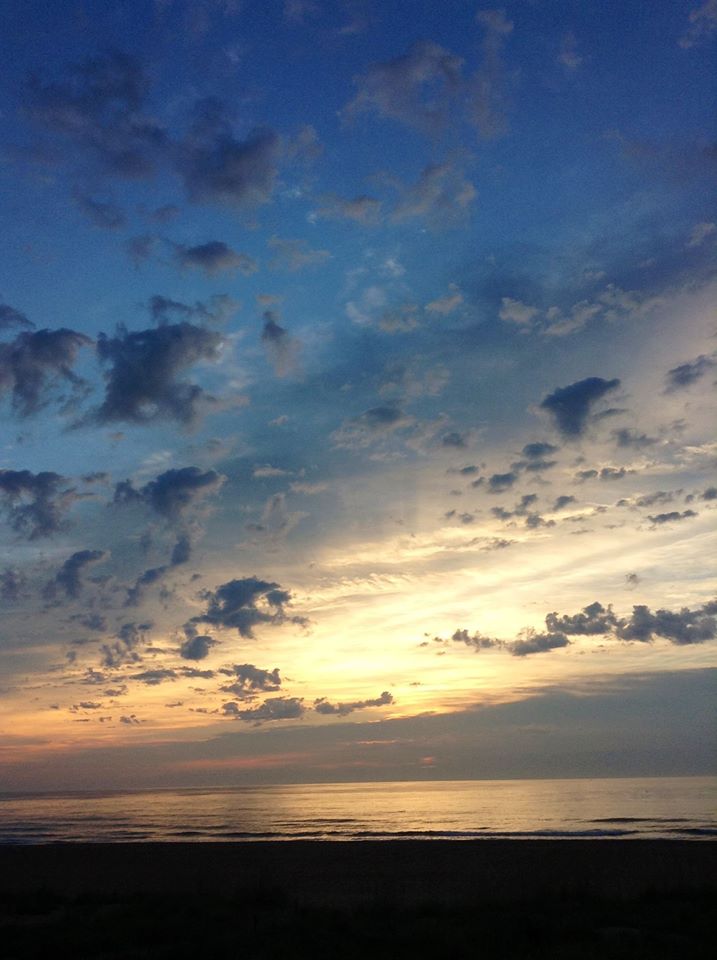 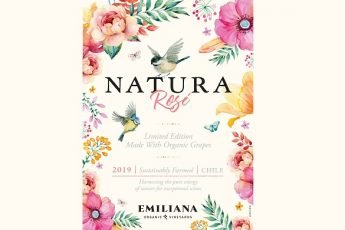