After seeing the Burrowing Owl on Thursday night last week and talking to some other birders I realized that Friday was shaping up to be a good migration day, at least so far as we could divine from the weather forecast. I decided to take Friday off from work and devote my day to birding. I was up and out of the house before dawn on Friday morning to get in a couple hours of birding in Forest Park before I had to drive Desi to school. Sadly, Forest Park was strangely devoid of migratory songbirds. By the time I had dropped Desi off at school reports had come in from other New York City parks that the birding was relatively lackluster elsewhere as well. This called for a change of plans!

Fortunately, another alternative was available in the form of a Wilson’s Plover that had been seen reliably for a couple of days out at Cupsogue Beach County Park in Suffolk County. Found by a Piping Plover monitor, it had been frequenting the same stretch of beach since it was found and had been seen by many. With migrant songbirds in short supply I figured the hour-and-a-half drive was worth it for a state bird, one that is a rare but somewhat regular visitor to New York from the southern United States. (I had always avoided chasing one figuring I would eventually find one on my own in Queens.) I’d only ever seen Wilson’s Plover four times previously: once in Florida, once on Trinidad, and twice in Puerto Rico (though those last two sightings were probably of the same bird on different days). So why not go see one that I could add to my state list?

Though I hit some traffic I made it out to Cupsogue in good time and quickly found other birders lined up with scopes…not looking at the bird. Though it had been found earlier in the morning it had since disappeared and there were now six disappointed birders not seeing the bird. Phone numbers were exchanged, we all split up, and the search was on. I walked and scanned, walked and scanned, walked and scanned. Eventually, I caught up with Anthony Collerton and Pat Lindsay and we were briefly excited when we saw a very distant shorebird that seemed to be what we were looking for but when we got closer to the point where we could actually identify the bird we quickly realized that we were actually looking at a Ruddy Turnstone.

We went to the bay side to scan there as the bird had been seen foraging on a sandbar out there at least once and while we did see many shorebirds none of them was a Wilson’s Plover. I was just starting to worry about the fact that I had failed to put sunscreen on and wondering if I had wasted a precious personal day when Pat got a call from Shai, who had the bird well to our west. Fortunately, Pat had a permit to drive the road behind the dunes and had parked nearby so we got back to the main parking lot quickly, walked out to the beach again, and enjoyed very nice views of a Wilson’s Plover actively foraging. 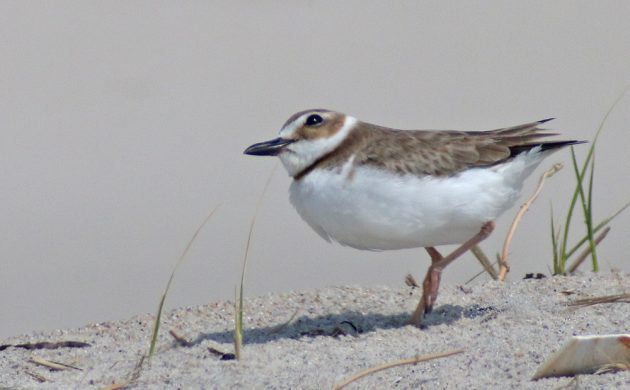 Look how big that bill is for such a small plover! 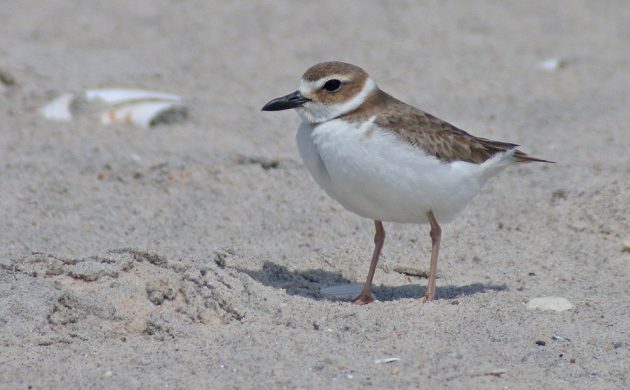 This is a very fine bird to add to my state list. My second such entry in less than twenty-four hours! The last time I added more than one state bird in a twenty-four hour period was in August of 2014 on a pelagic trip when I added White-faced Storm-Petrel, Fea’s Petrel, and Audubon’s Shearwater.

We all got great looks, including some rather bemused tourists who somehow ended up at Cupsogue and were given an unasked for tutorial on shorebird vagrancy. The best part? It was a walkaway bird, meaning that I watched it until I decided that the sun was probably too much for me considering my lack of sunscreen and it was time for me to move on.

My next stop would be back in Queens where I hoped to refind the Burrowing Owl which had not been seen since it flew off over the marsh the night before. Could I refind it? What other hijinks would I get up too? Come back tomorrow for the thrilling conclusion to Twenty-Four Hours of Awesome! 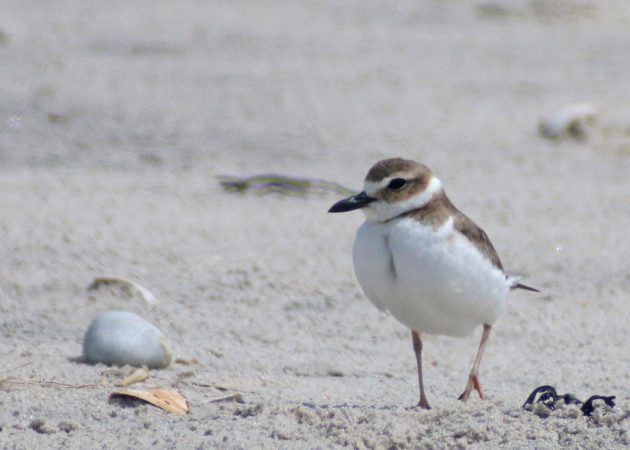 Oh, fine. One more Wilson’s Plover shot. Because why not?