What’s in a Name: Snipe Hunt 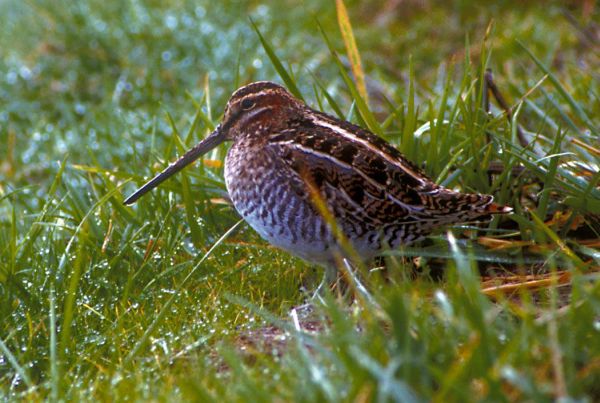 As you might have seen mentioned previously, last weekend the illustrious Corey Finger and I broke the Queens record with our sighting of fifteen Wilson’s Snipe at Willow Lake (we also proved the extraordinary merit of my water-resistant hiking shoes, but that’s beside the point.) Wilson’s Snipe seems almost too straightforward for What’s In a Name post – it’s named after good old Alexander Wilson, with the Latin name coming into play because it’s apparently yummy.

But when non-birders hear the word “snipe” they don’t think about poor probably-not-drowned Alex Wilson (they so rarely do.) They often don’t think of birds at all, but of the infamous summer-camp prank in which a newbie is left in the dark with a bag and a flashlight far from camp. In some variations, the victim is also told to make a comical noise in order to lure the prey. Birders roll their eyes – of course snipe really exist, and of course they’re not a subspecies of jackalope! – but don’t dig deeper. Real snipe hunting, for those that partake of such practices, is a daytime activity that involves guns and being able to track the birds’ rapid flight from cover. It has nothing to do with the childish hazing ritual.

Or does it? Ali Hussein or Hussain, a bird conservationist from India about whom I can find very little information, has apparently documented a traditional bird-trapping technique in his home region that resembles the folkloric snipe hunt in many particulars. It is used to trap water birds, it takes place at night, and it involves using light and sound to confuse roosting birds before throwing a net over them. At least one internet commentator has suggested that this constitutes a real live snipe hunt, although how a technique used by hunters in rural India could have entered the folklore of suburban American childhoods isn’t exactly clear. It seems more likely that common practices like spotlighting and netting informed both the real and the prank hunters.

For modern birders, of course, the most annoying snipe hunt isn’t inflicted by fellow Boy Scouts or cabin-mates. It’s the one that arises when people use eBird without realizing that the Wilson’s Snipe was split from Common Snipe back in 2002, and trigger a rare bird alert by using the name of the Asian species for everyday American birds.

« Previous post
Bald Eagles of Boundary Bay
Next post »
Where Are You Birding This Second Weekend of April 2017?