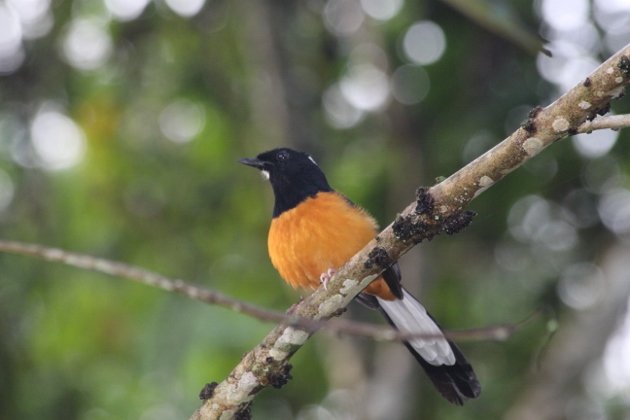 I’m a biogeography buff, and I’m seriously disappointed when I get a guide book that doesn’t have maps in. One of the interesting things I noticed in my Birds of Borneo guide was the seeming pattern of lowland endemics in the area of Sabah. Most endemic species in Borneo are either found across the whole island or are restricted to upland areas in the central and northern mountains.But there are a handful of species that are found in the lowlands of Sabah  but not across the rest of the island. In all cases the endemic had a closely related species pair in the rest of the island. It was an interesting puzzle, and one I could have solved quite easily had I read some of the rest of the book. It turns out that the mountain ranges which come close to the sea in two places in Borneo, coincidentally near the borders of the Malaysian province of Sabah, have acted as something of a barrier to movement, and has given the area just enough isolation to result in a few new species.

The White-crowned Shama is one such endemic, a split from the much more familiar White-rumped Shama that visitors to South East Asia may have encountered. I have encountered this sister species, insofar as I heard one once. Maybe twice. The White-crowned Sama was, for most of the start of my time in Borneo, similarly elusive. I heard them, and they are marvelous songsters. Then, I managed to get once elusive flash of a viewing as one imitated some Brown Fulvettas (a local babbler).

Then, on close to my last day in Borneo, at dawn at an empty Poring Hot Springs, I saw one sitting out on a branch as bold as you can imagine. Excited, I took a photo and crept closer. And closer. And then so close I could almost touch him. And he (or she) just kept singing. Here you can see the actual crown Like the closely related Oriental Magpie Robin, the White-crowned Shama likes to indulge in some tail pumping Another day, another fabulous endemic from Borneo! « Previous post
Birding the Cyclades: My my, how can I resist you?
Next post »
The Early Migrating Wood-Warblers