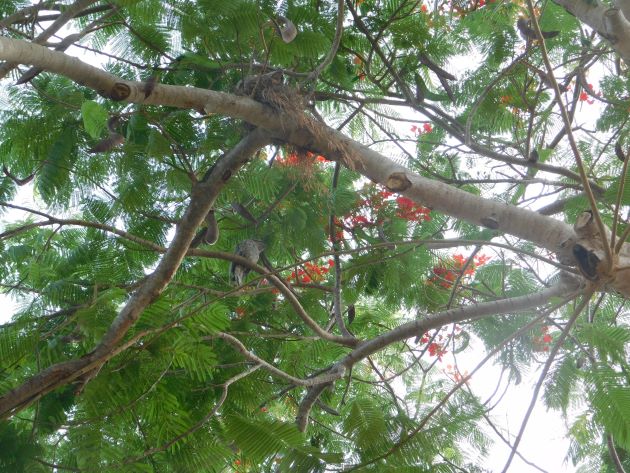 Our Christmas Day in Broome was much like any other Christmas day in that we did a bird list for the day. We usually expect to see over one hundred bird species around the local area during the day and this year was no different. However, we had a beautiful surprise put on by Mother Nature, which really started our day off well. We had a walk around our local area to start our list after putting a few bird species on from our garden whilst we had a coffee. We checked the Poinciana tree to see what the Tawny Frogmouths were up to and there was one huge surprise! In the photo above there is an adult Tawny Frogmouth above the nest as well as the one in the nest.

One day this week one of the adult Tawny Frogmouths was right against the footpath in a Frangipani tree. It clearly thought that we could not see it!

We had the first of our wet season rain last Thursday with 24mm falling in twenty minutes and wind gusts of 83km/hr and the Tawny Frogmouths are no longer in the nest. No doubt they were aware of the rain coming and all moved to a safer tree, because Poinciana trees can be rather brittle in stormy weather.

As this post goes up we will have hopefully had a successful start to our 2023 bird list and we wish you all the best for the New Year and that you all have good health and good birding.

Where Are You Birding this Third Weekend of March 2009?

« Previous post
Baby Bird Identification: A North American Guide–A Book Review
Next post »
Why You Should Make Friends with Biologists