A Pocket Guide to Pigeon Watching: Getting to Know the World’s Most Misunderstood Bird: A Book Review by a Pigeon Cynic 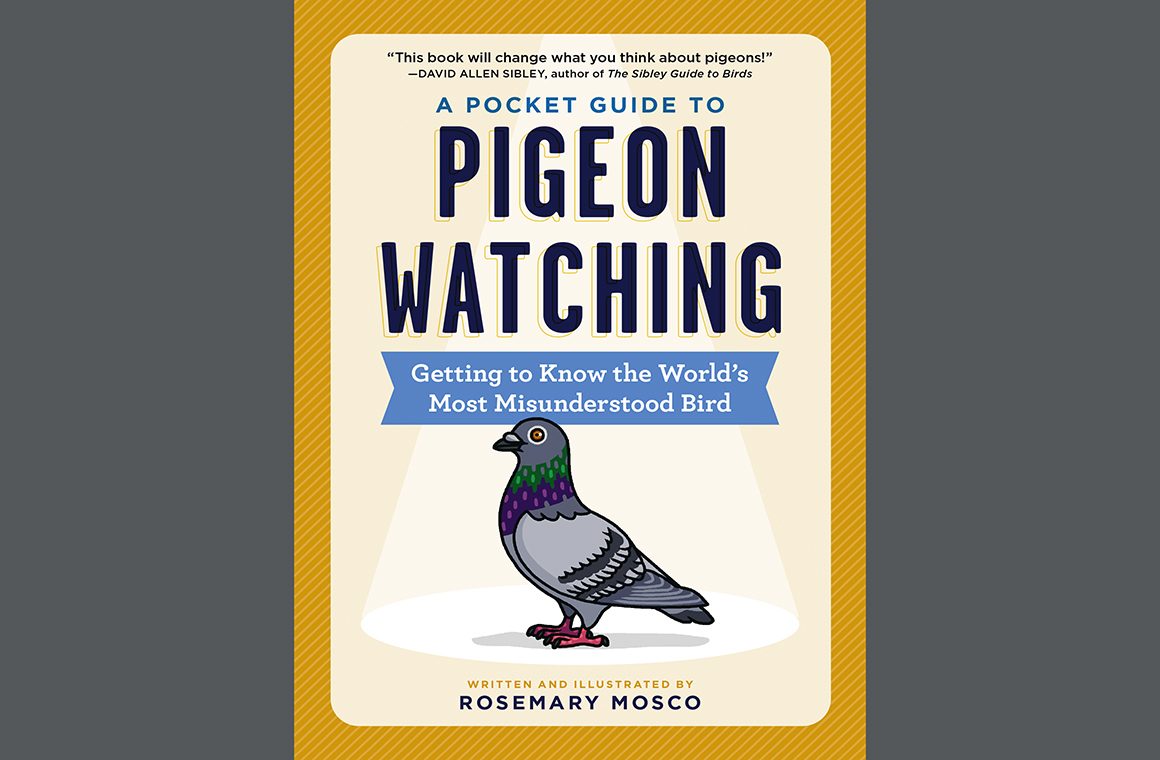 The American Birding Association has declared that 2022 is the year of the Burrowing Owl, but if Rosemary Mosco has her way, it will also be the year of the Rock Pigeon. Yes, sure, Rock Pigeons are not a vulnerable species, unless you count the number of times they have been mocked, scorned, and shooed away. They’re apparently not a sensitive species either, because this derision doesn’t seem to bother them at all! But it does bother Mosco and A Pocket Guide to Pigeon Watching: Getting to Know the World’s Most Misunderstood Bird is her very convincing argument for the importance of the pigeons, specifically those gray/white/brown birds with the iridescent necks, in our cultural history and daily lives.

Rosemary Mosco’s work is hopefully familiar to many of you. She is a scientific artist, naturalist and educator for the non-scientific majority, creator of Bird and Moon, a web comic made up of adorable images and witty nuggets of scientific facts, weird and common. Mosco is also the author of Birding Is My Favorite Video Game: Cartoons about the Natural World (2018, a collection of Bird and Moon comics); co-author of several children’s books, including The Atlas Obscura Explorer’s Guide for the World’s Most Adventurous Kid (2018) with Dylan Thuras and Joy Ang, Butterflies Are Pretty … Gross! (2021) with Jacob Souva, and the forthcoming Expedition Backyard: Exploring Nature from Country to City (A Graphic Novel) with Binglin Hu; writer for various other nature publications and organizations, and a social media presence who always makes me smile. 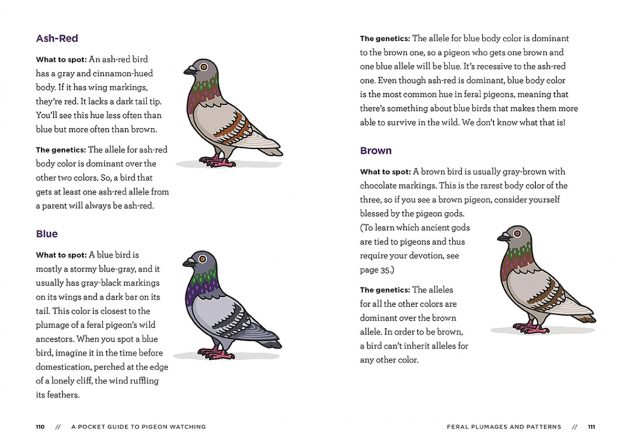 Mosco’s basic argument for pigeons is that we–humans–domesticated wild pigeons ages ago, used them as food, a source of fertilizer (as in pigeon poop), communication, recreation (pigeon racing, still a thing in some places), even as objects of worship, and then abandoned them in favor of more modern sources of protein, fertilizer, communication technology, and gods. “Pigeons have lost their usefulness. And when we stop thinking that animals are useful, we find it a whole lot easier to hate them” (p. 57). This is an arguable statement, especially when you think about cats.

Mosco understands that there’s a wall of reasons why people hate Rock Pigeons and proceeds to dismantle them one by one using a powerful tool–information. She offers up their historical scientific usefulness; ubiquitous presence in films; anatomy; diversity in breeds and appearance; relatives–from Dodo to Nicobar; and, in the longest chapter, their behavior, from cooing to wing clapping to riding the subway to courtship, nesting, and fledging. The pigeon-specific information frequently involves more general scientific concepts, like the rules for scientific names of species and the genetics of inherited traits, and its wonderful how effortlessly Mosco weaves scientific perspective and language into her text, mixing anecdotes, scientific theory, humorous asides, and colorful illustrations. She’s writes and illustrates from a deep knowledge and love of nature. I say this because only someone well-versed in a topic could take it, roll it around, smooth out the edges, and make it clear and accessible to beginner naturalists and at the same time appealing to the those with a little more knowledge. 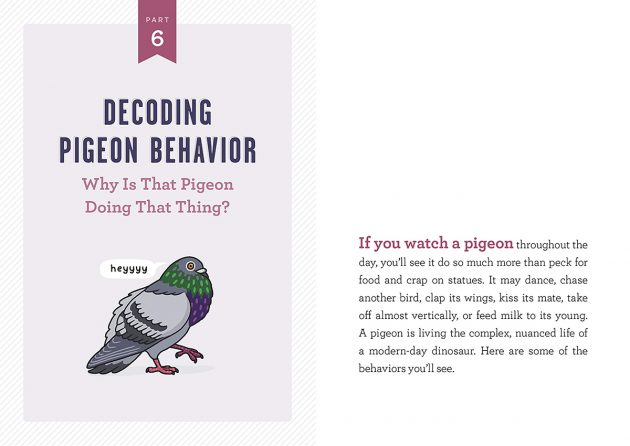 There are three key ingredients why A Pocket Guide to Pigeon Watching works. The first is Mosco’s illustrations. The first word that comes to mind when you look at them is ‘adorable.’ I am not a fan of adorable, so there must be something else there. Mosco’s birds (and other creatures in her comics) carry an air of insouciance. You expect them to turn around and look at you and say, “Hey! Watcha looking at, human?” They’re smart and self-confident and I’m not sure what it is about the art style that communicates this–a little quirkiness in the body line? An unexpected complexity to the shading? A certain shape to the eyes?–but I like it.

The second element is Mosco’s sense of humor. She’s very funny, sometimes ironically, sometimes subtly, quite often punnily. Talking about a famous British homing pigeon who traveled thousands of miles to return to its owner, Mosco quips, “No power in the world can stop true dove” (hahaha–sorry, I can’t help it. p. 89).  Describing the “weird respiratory system” that enables pigeons to pant and breathe deeply at the same time by waggling their neck muscles, Mosco comments, “Try this yourself. (It won’t work, but it will look hilarious)” (p. 141).  Digressing a bit in the chapter on Brains and Intelligence, Mosco crafts the image of a Palm Cockatoo beating with drumsticks on a hollow tree to attract a mate, boasting that he’s a drummer who is going to be in a band. That sounds a lot digressive, doesn’t it? It isn’t. The humor is well-integrated into the text and never distracts from our education, it just makes it fun.

Mosco’s loving respect for Rock Pigeons is the final element that makes this book work. Her awe for their skills and history shape every chapter of her book and if you’re not convinced that pigeons are worth watching by the facts, the strength of her affection may be enough to win you over. (And she isn’t the only person to adore pigeons. Her history of their contributions to civilization include no less of a champion than Charles Darwin, who studied pigeons in pursuit of figuring out evolution, developing a great fondness for them in the process.)

I am about three-quarters of the way there. I started A Pocket Guide to Pigeon Watching: Getting to Know the World’s Most Misunderstood Bird as a Rock Pigeon hater. I’m ending with an open mind. I will watch the pigeons of New York City. I will look at their plumage patterns, observe their behavior, listen to their coos and whistles and other vocalizations. And, I will reread the list with which Mosco begins her book, “10 Reasons to Watch Pigeons.” It’s a good reminder why we should be watching all birds, especially the common ones. At the beginning of a new year, in a world still struggling with a pandemic and other ills, it’s good to spend time appreciating intelligence and beauty in the common creatures eating crumbs on our sidewalks, nesting on our air conditioners, and pooping everywhere (everyone poops). Happy 2022, 10,000 Birds readers! Wishing you all good birds, safe birding, and joyous twitches!

Corvus: A Life with Birds Giveaway 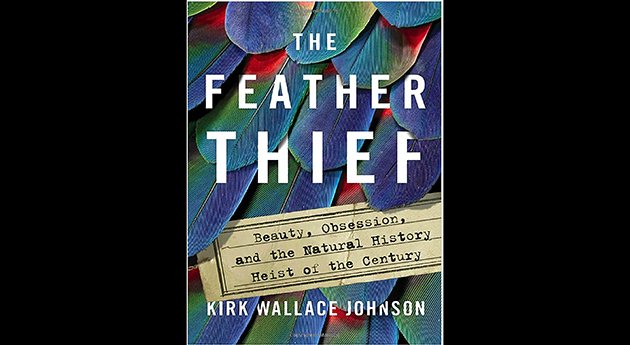