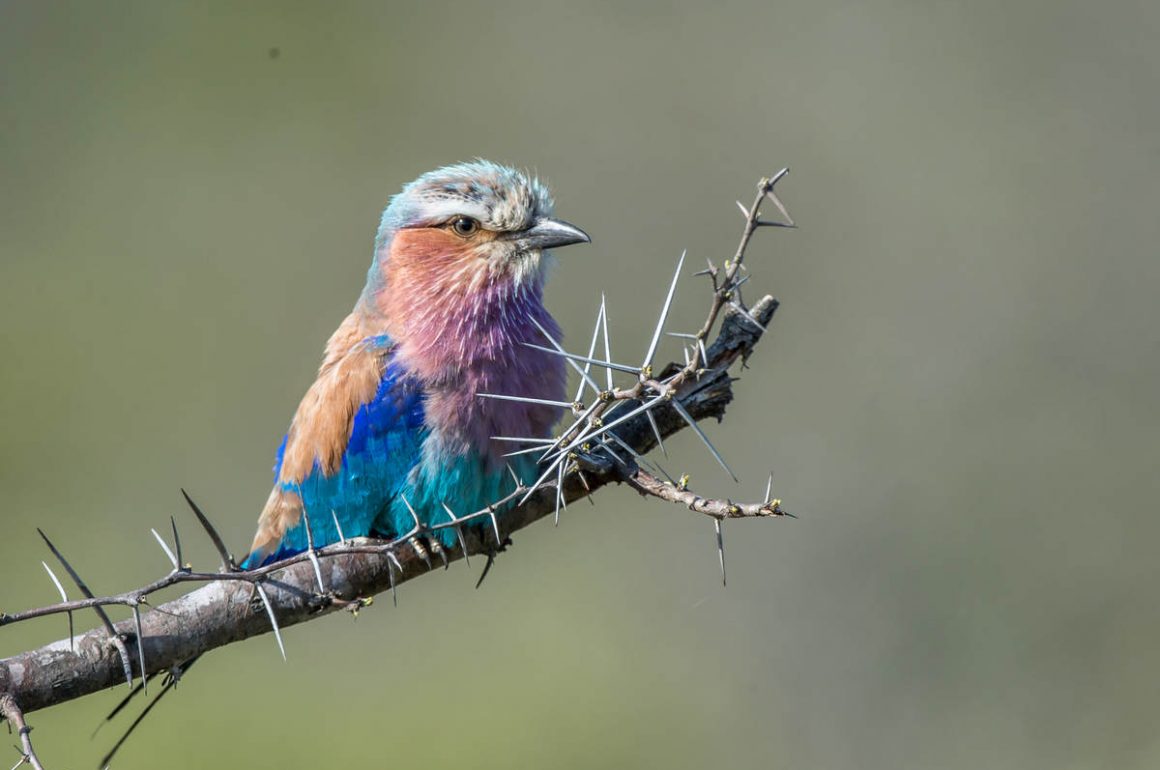 Skukuza is the largest camp and the administrative center of Kruger Park. Inside the camps, you are allowed to walk around freely – outside, this privilege is reserved for the animals.

There are quite a few raptor species around Skukuza. For some reason, I found them on average less impressive than raptors elsewhere – almost “big brown jobs”, possibly because quite a few of them were juveniles. Of course, they are still very much worth seeing:

The African Fish Eagle (which, as the name suggests, primarily lives on African fish, as getting the fish elsewhere would be too time-consuming) …

… the Brown Snake Eagle (which indeed lives mainly on snakes, though not necessarily only brown ones) …

… the Jackal Buzzard (a potentially rather lazy bird – according to HBW, one female was retrapped after nine years just 8 km from the original site) – unfortunately, the bird below is not a Jackal Buzzard though but rather an immature Tawny Eagle, according to Debbie who is a much better birder than me …

… the Tawny Eagle (listed as Vulnerable and presumably a fan of the band Madness, as eBird specifically remarks on its “baggy trousers”) …

… the Martial Eagle, which is listed as Endangered and has the interesting Latin name of bellicosus, which means pretty much the same as martial …

… and Wahlberg’s Eagle, which reportedly is the commonest eagle in South and Central Africa.

A Barn Owl slept peacefully on the inside of the roof of a well-visited tourist cafe. It warned me not to order the latte though – overpriced and not very good, according to the owl.

If you want to get some irrelevant information on hornbills, please read my previous post on them. If you just want to see some photos of the hornbills around Skukuza, here they are:

Upright evangelical Christians very likely frown on African Jacanas as they are polyandrous (one female, more than one male) and have reversed sexual roles (“male apparently performing most nest building, all incubation and all care of precocial young”). Most likely, the devil, not god created this species.

African Spoonbills seem unfazed by large reptiles. I guess you just get used to them with time.

While some bustards are the largest bird species capable of flight, the Black-bellied Bustard is only mid-sized. Apparently, the male has a weird cork-popping advertising call, but even though we rarely listened to music in the car at Skukuza, we did not hear it.

Unfortunately, I earn absolutely no money whatsoever if you look at my older posts, so it is a bit pointless to accompany these photos of a Black-collared Barbet with a link to an older post on barbets. There is also a much older blog post on 10,000 Birds (by Adam Riley) specifically on Africa’s Barbets. Hopefully, as he is the owner of a birding company, Rockjumper, at least he gets some clients this way.

Rich older women can learn a lot from the Emerald-spotted Wood Dove about how to accessorize in an understated yet effective way.

… while the White-throated Bee-eater – even more sensibly – does not even leave there in summer.

For some reason, the largest member of the heron family is not called the Great Heron nor the Giant Heron but rather the Goliath Heron. Consistency is overrated.

Grey Herons usually refuse to play basketball together with Goliath Herons – they say it is just not fair. I tried the same line of argument in high school, did not help me much.

While I did not see a Striated Heron using baiting at Skukuza, the species is known to do this, and I have seen it elsewhere. It is also documented on video.

Supposedly the Squacco Heron does that too, though I have not seen it myself.

As I have limited trust in my bird id skills, I have to rely on location to call this a Greater Blue-eared Starling rather than a Lesser. Quite a beauty.

About the Green-winged Pytilia, the HBW entry includes the harrowing “Popular cagebird, large numbers of which are captured and exported; mortality during shipment high”. Humanity can be a scarce resource in humankind.

While the Grey Go-away Bird is closely related to the colorful turacos, they are uniformly greyish-brown, earning them the well-deserved Latin species name concolor. It is a bit disappointing that the Latin name has no relationship to their rather amusing English name. I would not want to pronounce the word “onomatopoetic” without a bit of practice, but the name “Go-away bird” apparently is onomatopoetic based on the species’ alarm call (which indeed sounds like “go away” if that is what you are primed to hear).

Some Hadada Ibis earn a substantial share of their income from doing voice-overs in children’s TV programs. Their talent for this work has long been recognized: “Frederick Jackson, turn of the century Governor of Uganda, and an early leading authority on the birds of East Africa, likened [their] calls to the hideous mocking laughter of a witch.” (HBW)

Helmeted Guineafowl seem to have some kind of paternity leave system in place within their flock – when the dominant male and female leave to breed, the second-highest-ranking male temporarily becomes flock leader (HBW).

Presumably, the Natal Spurfowl thinks the Kruger Park is good habitat, with all the big animals around – the HBW remarks (with a slight hint of disapproval) that the species forages on rhinoceros and elephant dung.

… and the dung provider.

If you want to explain the name of the Chinspot Batis, it helps to have a photo of the female available – it actually has a chin spot. Of course, out of spite, I am only showing you a male.

Similarly, to explain the name of the Lesser Masked Weaver, it helps to have a photo of a male available (the female does not wear anything mask-like). However, what you see below is not a Lesser Masked Weaver but rather a Southern Masked Weaver or a Village Weaver (thanks to Debbie for the correction – see her comment in the comment section).

The Red-billed Quelea – also a weaver species – is apparently the most numerous undomesticated bird on earth, something humans are not happy with (though we are fine with domesticated chickens being even more common). As a consequence, the species is sometimes called “Africa’s feathered locust”, and control measures include detonating firebombs in the colonies during the night (source). Kind of like Dresden, I guess.

According to eBird, the Spectacled Weaver can be identified by its “Zorro-like bandit mask surrounding the pale eye”. I wonder whether – after Russia incorporated the Z sign into its country’s identity – Zorro movies will be avoided in the Western world. On the other hand, I still occasionally drink Corona beer, so probably not.

Levaillant’s Cuckoo looks a bit like a roadrunner, except that it has different colors, preferentially stays on trees rather than on the ground, and lives on a different continent. Well, both are cuckoo species.

The Latin species name of the Lilac-breasted Roller is caudatus, or short-tailed – given the spectacular colors of this bird, this is a clear indication that the person who came up with this name must have been color blind.

The Orange-breasted Bushshrike has a more appropriate Latin name, sulfureopectus.

For some reason, it seems I only got photos of female Pied Kingfishers at Skukuza, as males have a narrow second breast band while females have a single broken breast band (source)

The same is true for the Red-billed Firefinch – a pity for the sexist photographer, as the male is much more attractive than the female.

I thought this is a juvenile Lesser Striped Swallow but according to Debbie (see her comment), this is actually either a female or immature Violet-backed Starling …

… while this is a Red-breasted Swallow. In light that is far too intense to give a good photo.

I was hoping for the Sabota Lark to be named after some outrageously macho Western explorer with a juicy biography, but unfortunately, sabota is just a Tswana word for larks. Sorry to disappoint you.

The Southern Boubou presumably got its name from its contact call, a repeated, low-pitched “boubou”, mainly by the male.

Please contact me if you can think of anything interesting to say about the Tawny-flanked Prinia.

If my understanding of bird anatomy is correct, the Water Thick-knee should correctly be called the Water Thick-ankle, as what one can see roughly in the middle of the bird’s legs should be its ankles, not its knees.

The name of the White-bellied Sunbird leaves me somewhat disappointed – surely the white belly is not the most remarkable characteristic of this species? The Latin name talatala seems more suitable – tala means green in Tswana, and talatala means very green (HBW). I had a hunch that there are other languages that use this duplication of the same word to indicate an intensification, and (after asking a linguist friend and birder) learned that the term is “reduplication”. Wikipedia helpfully adds that “Examples of it can be found at least as far back as Sumerian, where it was used in forming some color terms, e.g. babbar “white”, kukku “black”.

In any case, if you want to demotivate an individual of this sunbird species, feel free to keep calling it a White-bellied Sunbird.

Presumably, the White-crowned Lapwing is grateful to be named for its white crown and not for its rather ridiculous-looking yellow wattles.

The HBW entry on the White-throated Robin-Chat gives a fascinating insight into the day-to-day work of ornithologists (in the “Diet and Foraging” section):

The friend I was traveling with described the Marabu Stork as the ugliest bird he had ever seen. Coming from a dentist who has seen his share of decaying teeth and festering gum diseases, this is a harsh judgment.

Compared to that species, the Yellow-billed Stork is a beauty.

While of course most people visit the Kruger Park for its magnificent birds, a few weirdos come primarily for some other animals. To please these people, I have added a few more photos. 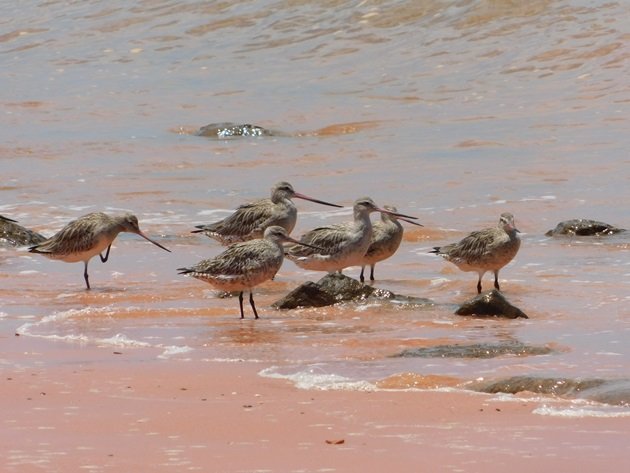 Where Are You Birding This First Weekend of May 2015? 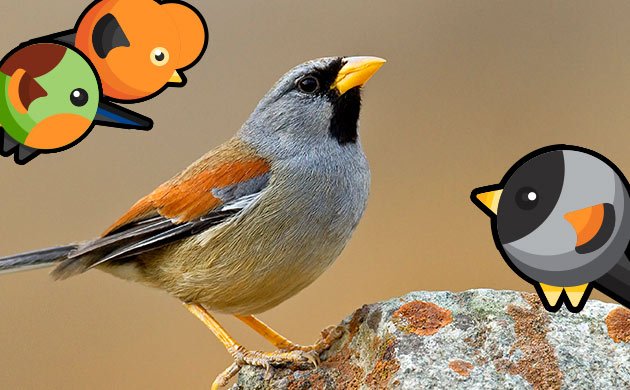