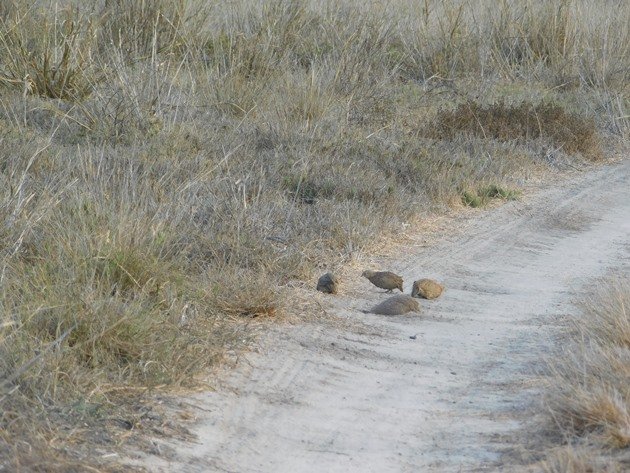 We are lucky around Broome that we can quite easily observe Brown Quail. They like overgrown grassy areas and there are plenty of those areas around Broome. The environment at this time of year is mostly dry grass and the Brown Quail are busy digging up the grass seeds. You are most likely to encounter Brown Quail as a chance encounter as you accidentally disturb them when you traverse their habitat. It can be at any time of day that you are innocently walking through the bush and suddenly a ball of feathers flies out from near your feet. The Brown Quail almost instantly drop back to the ground and you have little to no chance of finding them again. They race through the undergrowth and they are gone. Your heart stops racing and you continue on your way!

The best time to observe Brown Quail is either at dawn or dusk. You may recall several Brown Quail casually walking by our camp at the De Grey River rest area last year. Recently we were in our vehicle close to home on a dirt track when we noticed the four Brown Quail in the header photo. I quickly took a few photographs thinking they were not going to hang around with the vehicle fairly close to them. It was almost 5:30pm and the sun was dropping fast.

We sat watching the Brown Quail digging away in the dusty track and soon realised there were more than four. A fifth Brown Quail popped its head up from the edge of the track.

The Brown Quail were determined to make the most of that section of dusty track and were not at all concerned by our presence. We sat in the vehicle and we did not turn the engine off, because the change in sound may have concerned them. We thoroughly enjoyed observing the antics of the Brown Quail in the last of the daylight and taking photographs. I did get a bit carried away with photographs, because we were so surprised that they were unperturbed by our presence!

It is hardly surprising that the track is so dusty when you see how much digging the Brown Quail do! We had observed two other flocks prior to this flock that evening, but they were not as cooperative as these birds!

We had thought for quite some time that there were five Brown Quail. Suddenly a sixth Brown Quail popped up from the middle of the track! You can see it in the photo below in the bottom right lying flat in the dry grass digging away.

Eventually all six Brown Quail were wandering out in the open on the dusty track.

We sat observing the Brown Quail for twenty minutes, which is quite incredible when you often see them for less than twenty seconds when they shoot out from under your feet! We could have stayed longer, but the light was fading fast and it was our dinner time as much as theirs!

Brown Quail are a fine example of “brown” not being a boring and dull colour! 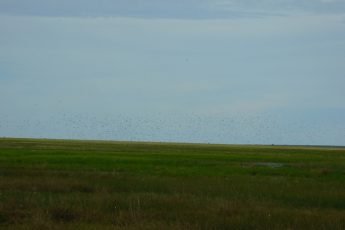 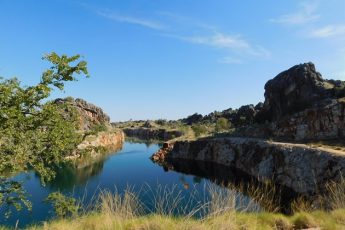