It’s clear that birds copulate, procreate, and promote their genes with alacrity. But love? Do birds feel love? Can they? To explore this question, it’s probably best to first define love. Love includes elements of need, but primarily those of affection. It’s an attachment to another being that inspires deep longing and desire to be together. It’s easy to observe this attachment behavior in parrots, especially pets. A succession of budgies and one venerable Chestnut-fronted Macaw (Charlie) have sought me out for caresses, allopreening and kisses over the years. Charlie was never more content than when she was perched on my shoulder, her wing pressed against my neck and cheek.  But any mention of affection or “love” in parrots must include that other, unwelcome element: jealousy.  Psittacine love can be jealous, and parrots demonstrate strong preferences in the partners they choose to shower with affection. When Bill and I first got together, Charlie would tenderly preen my cheek, eyelashes and hair, nibbling at my lips and making loud kissing noises. She’d then climb down my leg, waddle across the room, climb up Bill’s jeans, and bite him, once right in the middle of his back. Message sent, she’d waddle back to me, her true love and favorite possession. I know one thing. That macaw loved a sip of beer.

While we’re used to declarations that our pet parrots “love” us just as we love them, and they can be quite demonstrative in showing their affection, the evidence is thinner for wild birds. No human can divine what a mated pair of geese or eagles may feel for one another, but stories abound of birds,especially Canada Geese, who spurned all offers from members of the opposite sex for years after a mate was killed. I’ve seen mourning behavior in a longterm captive Savannah Sparrow whose temporary cagemate, a dark-eyed junco, recovered from its wing injury and was released. The birds had roosted together each night in a single soft clump of feathers. When the junco was released, the Savannah Sparrow called frantically, became greatly agitated, then quit eating and sat, silent and still, on his perch for two days. Did Vanna love his cage partner? He certainly seemed lost without her.

Wild birds I’ve raised from tiny, featherless orphans demonstrate attachment to me, as would be expected for any young creature with a surrogate mother, even a weird, long-limbed primate mother. Mourning Doves in particular display strong attachment behavior, cuddling under my chin to nap and preening my hair and eyelashes. Needless to say, this makes them quite pleasant to raise. Young robins act like spoiled brats,demanding food and attention long after they should be on their own. But the most startling demonstration of affection and perhaps love I’ve experienced came from an unexpected source: Ruby-throated Hummingbirds.

In 2003, I raised three orphaned ruby-throats from the early pinfeather stage to release at around 30 days of age. I made sure they were able to self-feed from flowers and feeders before cranking the aviary window open and removing the screen. They all took off with such speed, disappearing into the surrounding yard, that I was flabbergasted to find one perched on the clothesline as I hung out laundry later that same afternoon. It was Adventure Joe, and he was famished and peeping, seeking me out for food and comfort. The other two sought me out, as well. Perhaps they weren’t as ready for the wild as they’d seemed. For the next month and a half, our yard was enchanted, populated by free-living hummingbirds who’d suddenly appear, solicit a little food, then go back to the flower beds and feeders. I chalked it up to the fact that the three had been hand-raised from a young age. It sure was a kick to have them around! I’ll never forget the day I looked behind me as I road the roaring riding lawnmower, to see a little phalanx of three hummingbirds following over  my head. The real test of hummingbird bonds came in 2004. My three orphans had left for Central America in September 2003. Would they return? On April 17, 2004, my husband Bill stepped out, coffee mug in hand, to take the morning sun. A male Ruby-throated Hummingbird zipped up, hovered in front of his face, then poked his beak in between each of Bill’s fingers. It was as close to a handshake as a hummingbird could manage. Later than day, I looked out to see two male hummingbirds sitting shoulder-to-shoulder on a twig by our front door, one that had been their favorite as youngsters. I rummaged around until I found the small feeder they’d used the summer before, and filled it with the protein-rich solution the three had been raised on. As I reached to hang it from a branch, three adult male rubythroats wove through my arms and around my head, fighting to be the first to feed. Six months and two ocean crossings behind them, my hummingbirds were home, right where they belonged.

Homing instinct isn’t necessarily a demonstration of affection, I know that. I wondered about the nature of the bond I forged with the three hummingbird orphans. Would any young hummingbird become attached to its caretaker, or was this dependency an artifact of the birds’ having been hand-fed since they were in pinfeathers?  I am rarely able to put a whole puzzle together, usually being given only a few pieces at a time. By the next summer, I’d have one more piece. Just a year after the original three orphans came in, I got a call from a woman with a newly fledged hummingbird who’d been found trapped in a greenhouse. Bits of down still adhered to its head feathers. It was weak and debilitated from its long, hot ordeal. I put it in an empty glass aquarium and brought a small feeder filled with hummingbird maintenance diet up to its bill. It quickly accepted this food source, and was self-feeding from then on. By the next morning it was strong enough to fly. I put up a nylon screen tent in the yard and released the hummingbird into it, hanging a feeder in the center of the tent. I kept the foundling for six more days. I never handled it, hand-fed it, or did anything more than speak kindly to it. It was an altogether different upbringing than my three fledglings enjoyed the previous year. Sylvia Salvia was released at around Day 28, self-feeding like a champ from a special feeder and from flowers all around my gardens.

And the oddest thing happened. Just like the hand-fed orphans, she actively sought me out in the yard. She’d land on a low twig right by my face and peep. When I’d speak to her, she’d ruffle her feathers and preen companionably. I knew that this behavior had little to do with food, because I hand-fed her only once. She’d leave to visit the flower garden or her feeder, then return to perch near my face. As time went on and she gained flight prowess, she’d hover in front of my nose, chipping irritably until I brought my finger up in front of my face. And shed land on it, fluff her feathers, and settle down for a good preen and one-on-one chat. Seemingly satisfied, she’d rocket away on some pressing hummingbird business. I cannot describe how it felt to have a free-living, essentially wild hummingbird seek me out for companionship. I’m still searching for an answer to this delightful conundrum. I’ve decided that, lacking a mother, Sylvia simply needed to make contact with someone she knew, someone who cared. And somehow, having a person speak lovingly to her filled that need. Being near me was clearly reassuring to her. Did she love me? I can’t say, but I sure loved her. Whatever was going on, I know that I will never be through learning about how birds’ minds work, even the tiniest ones.

This blogpost has been adapted in part from my new book, The Bluebird Effect: Uncommon Bonds with Common Birds (Houghton Mifflin Harcourt). Released March 20, 2012, it’s in its second printing, which may have something to do with its being selected as Book of the Week on Oprah.com. I know, it’s kind of tacky of me to mention it, but when has another nonfiction bird book made that list?  You can order an autographed copy from me here. 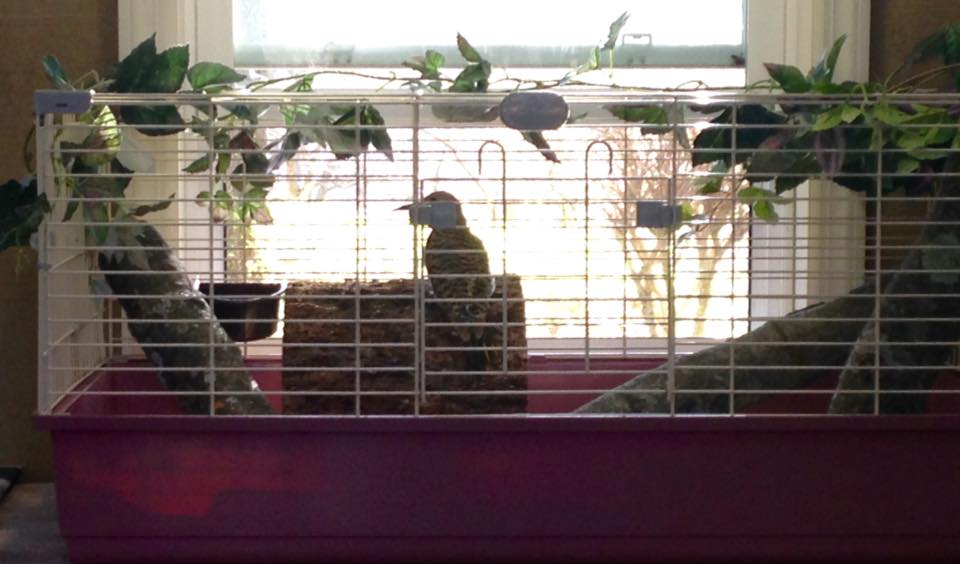