Not an urban legend

From the time I was a small child, I would flip through the pages of field guides and imagine the stumbling across this or that amazing bird. My criteria for amazing were less sophisticated in those days — mainly, they required that the bird be different that the ones I saw around every day, and different in a visually striking manner – bright colors, size, oddball crests or gular sacs or long tails.

Unlike the hobbits, space aliens, and vampires in the other books I read, the strange birds tucked away in the Peterson Guide sometimes came to life. Sometimes it was just a matter of looking harder — walking a little further into the woods to get my first glimpse of a Blackburnian Warbler or being in just the right place at the right time to spot an elusive Yellow-billed Cuckoo. But sometimes, it was a really big deal, like the day in 1997 when my dad came in from the fields saying that he’d seen a bird he didn’t recognize. We flipped through the field guide together, and he pointed out the Scissor-tailed Flycatcher. I was amazed — but at the same time, there wasn’t much else it could be. Luckily the bird stuck around and was documented by several able observers.

This fueled my ambitions to see more and more new birds. I began to look at the field guides and see not just the possibilities, but the ways in which I could put myself into the way of those possibilities. Some things still seemed out of reach (Texas, for instance, seemed about as likely a destination as the moon) but I began to do things with the purpose of “building my list” in earnest around this time, not so much for the sake of the list itself, but to see these birds that I’d always wondered about. Little by little, I expanded my horizons. One by one, birds that I’d thought of as pictures on a page became real. Little Auk and Red-throated Loon. Wood Stork and White Pelican. Orchard Oriole and Prothonotary Warbler. Each was in my heart long before it was on my list, and each first sighting, in part, seemed like a return.

But some species remain elusive when they shouldn’t be. I’d stared at pictures of the Evening Grosbeak as a child — it even made the cover of that particular edition of the Field Guide to Eastern Birds, which implied to me that it should be everywhere. And once, it seemed, it had been, for certain values of everywhere — in irruption years in my parents’ times, Evening Grosbeaks were legendary for descending in huge vivid flocks and vaccuuming up all the sunflower seeds in the neighborhood. But between 1988 and 2006, Project Feedwatch showed a fifty-percent decline in Evening Grosbeak sightings. And in all the years I’d been waiting and hoping, not one big yellow-and-black finch had showed up at my parents’ feeders. Even a big trip to Canada, though it turned up many other delightful species (Boreal Owl, anyone?) struck out on the “common feeder birds”.

But I’d never had much luck with irruptives in the east — no Common Redpolls, no Bohemian Waxwings, and my quest for a Pine Siskins was a Monty Python farce. Moving to Montana would surely make a difference, because Evening Grosbeaks aren’t “irruptive” here, they’re just birds, living their lives. And living my life in the same place, I’d find them. Right?

Well, eventually. The Siskins came quickly, the Bohemian Waxwings a little after. I still haven’t turned up a Redpoll.

It took just over two years, and just about giving up, but this week as I walked home from class I saw a box elder along the creek that was seething. Normally, I see a flock that size and think Waxwings of one kind or another, but why would Waxwings bother with a box elder when the mountain ash, hawthorn, and the like are ripe and ready? Moreover, these birds were too bulky to be Waxwings.

I stared at the tree full of Evening Grosbeaks for some time, trying to get a good estimate of the numbers. They moved around a lot, but I would say there were at least thirty and maybe up to fifty individuals, in a variety of plumages that seemed to speak of a successful breeding season.

When I went back the next day, they were still there. The husks of box elder seeds littered the ground, neatly stripped and devoured. So intent were the birds on their task that they didn’t seem to care about my staring. So I stared a long time, just in case I didn’t see them again for another thirty years.

(Jochen, I’ll try to get an abundant bird for you next time!)

Photo by Dave Menke, courtesy of the U.S. Fish and Wildlife Service 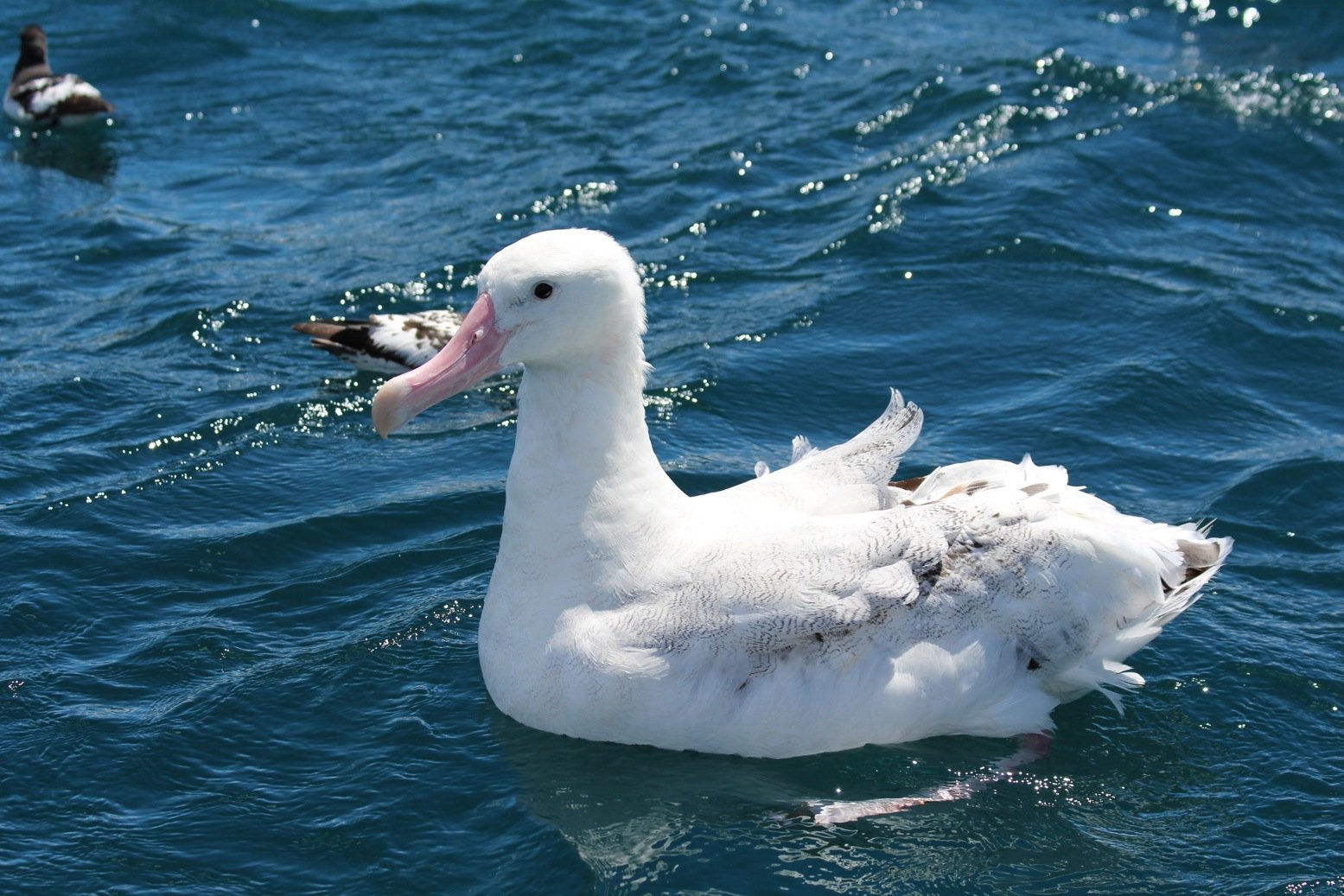