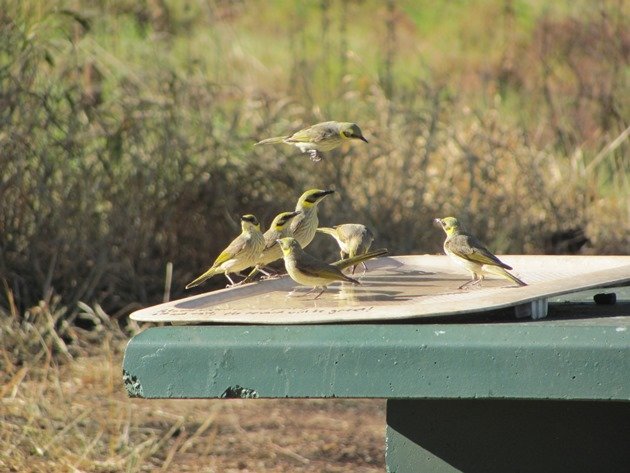 Driving along the Carpentaria Highway from the Amungee Rest Area where we had stopped for lunch and enjoyed the company of well over one hundred Apostlebirds we reached the Goanna Creek Rest Area. It was approximately 128 kilometres/80 miles and the road was in fairly good condition with sections of it being single lane bitumen and very little traffic. The Goanna Creek Rest Area is on higher elevation than the surrounding land with what would be a creek with flowing water during the wet months of the year, but was completely dry in July. The trees around the area were tall and offered species such as Black-tailed Treecreepers, Red-winged Parrots, Black-faced Cuckoo-shrikes, Grey-crowned Babblers and Red-tailed Black Cockatoos. It was getting late in the day and we decided to make the rest area our camp for the night and soon had our tent erected, but before that there was one important job to do!

When you are in the bush you are always aware of the lack of water and just how important it is for survival for not only yourself, but other creatures and birds too. There was a large water tank in the rest area, but as with many water tanks that we came across it was bone dry and you need to be self-sufficient. We always carry at least 65 litres of water in our four-wheel drive and we can always spare some for the birds. At the rest area there was a tray that somebody had left behind. On the tray it said:-

Put your water in the plate

The reward will be great

We initially added water to the tray at its location on the picnic table that was on a terrible lean! You can see from the header photo that we soon had Grey-fronted Honeyeaters diving in for a drink and bathe! We then decided to move it a few metres onto a flatter surface and started with it near the water tank for a minute or two and at that point we had a White-throated Honeyeater come in for a drink. 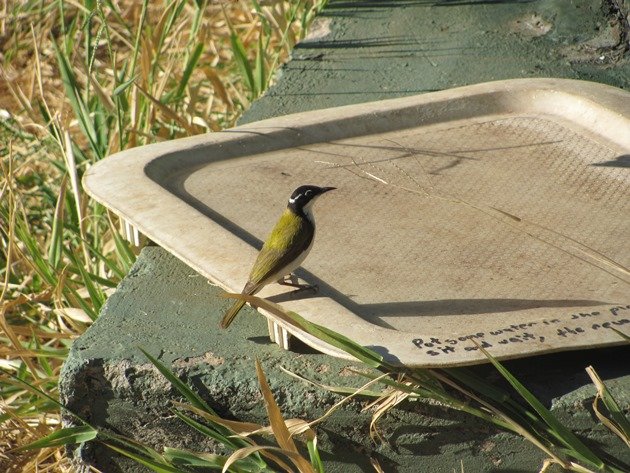 We then moved the tray to the flat surface of the fireplace that was a few metres away and closer to our table. Within seconds we had birds coming from all directions to the water. It was however interesting to watch as some birds returned to the other table where the tray had been empty. Some birds looked for the tray and its new location and other birds just returned to the location where they remembered the tray being. Eventually all the birds realised where they needed to be and it was chaos at the water! Having taken a large number of photos I then had to choose a few for you! 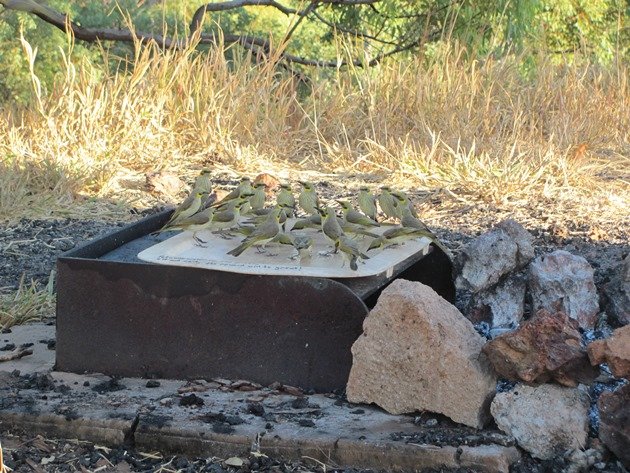 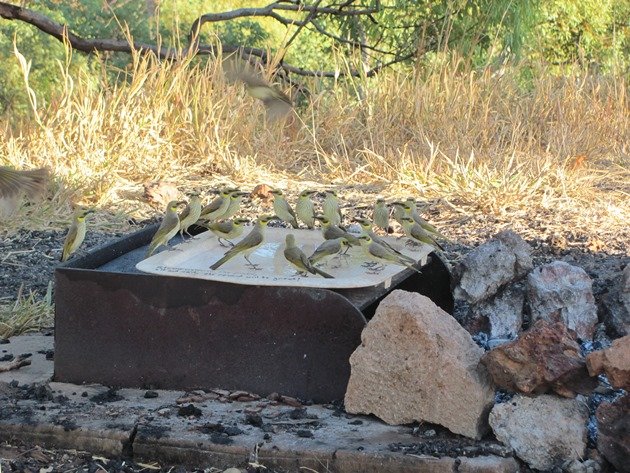 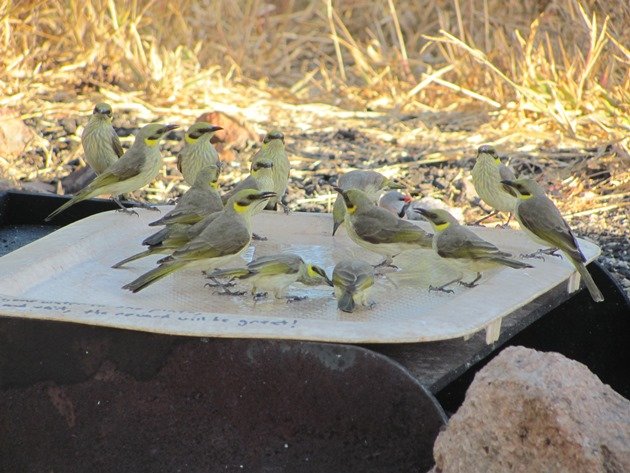 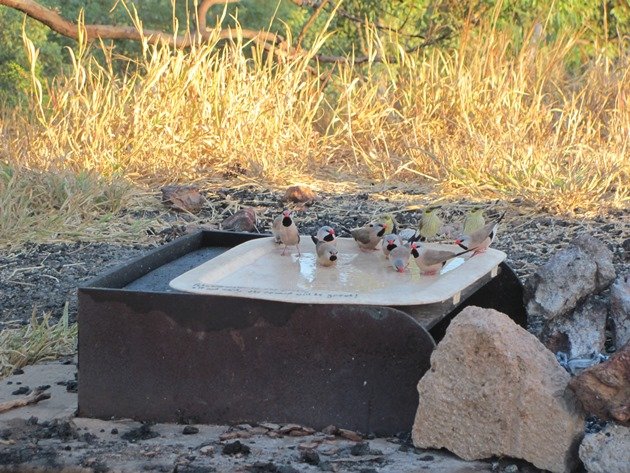 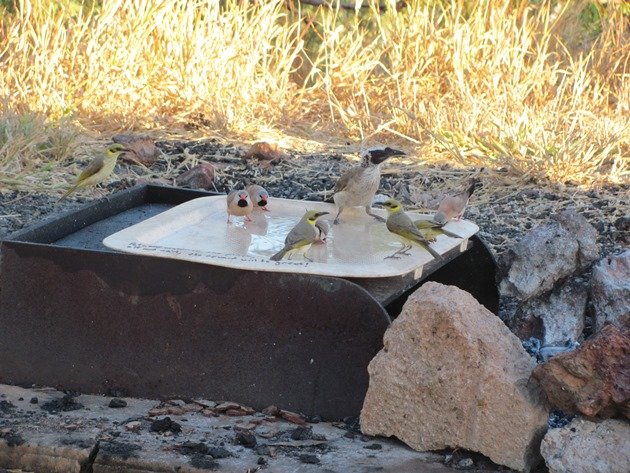 Larger bird species like the Pied Butcherbird and Great Bowerbird caused the Grey-fronted Honeyeaters to move back to the trees for a moment or two, but soon returned. 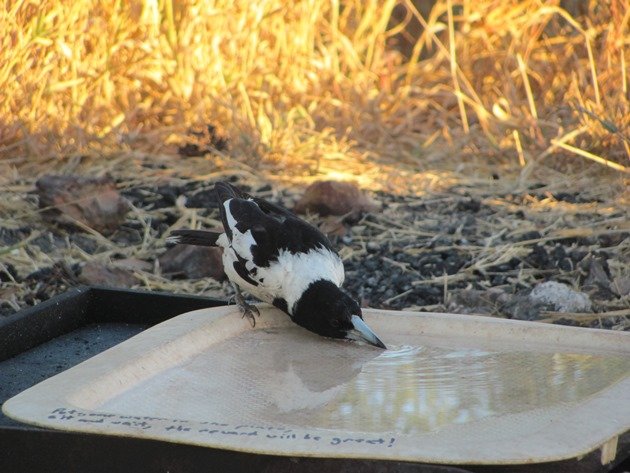 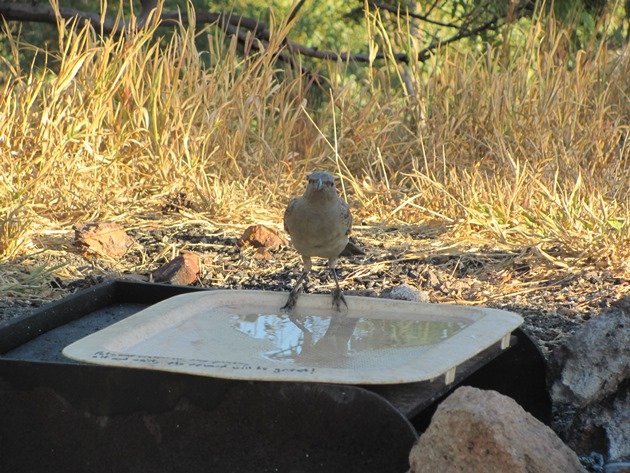 Peaceful Doves, Little Friarbird, Willie Wagtails and Masked Finch also came for a drink and other birds in the nearby trees and bushes included White-throated Gerygone, Rainbow Bee-eaters, Red-backed Fairywrens, Black-faced Woodswallows and the call of the Morepork after dark. We also observed a Spotted Harrier and Whistling Kites in the area.

If you happen to be driving the Carpentaria Highway it is well worth stopping to give the birds some water, especially when the creek is dry! Of course if the creek is flowing there is a good chance the highway is closed anyway due to flooding! 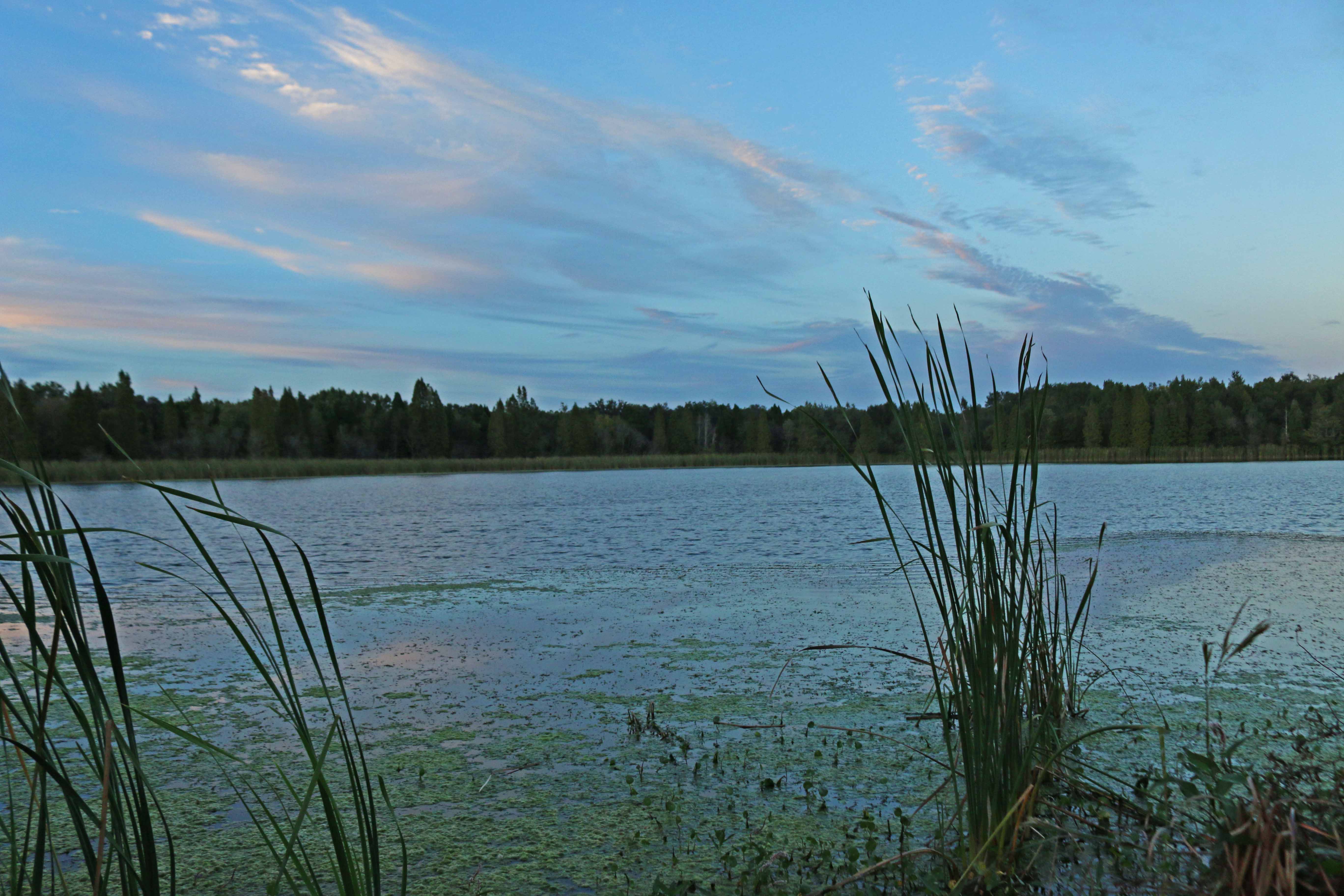 Where Are You Birding This First Weekend of November 2016?

Best Bird of the Weekend (Second of November 2010)