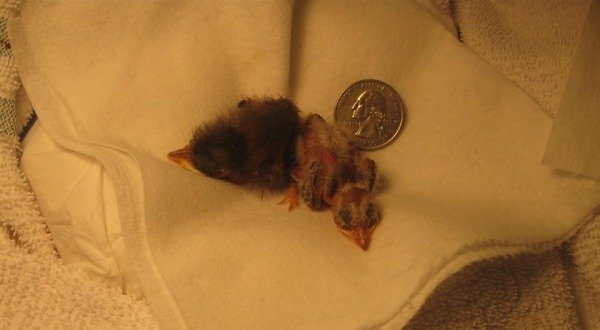 So I asked seven wildlife rehabilitators, “Tell me your favorite (or one of your favorites) release story – the kind that makes you keep going, in spite of everything.”

“A Scissor-tailed Flycatcher hatchling that I got in two years ago,” wrote Leslie Jackson, a rehabber in Tulsa, OK, and sent the ‘before’ photo above and the ‘after’ photo, six weeks later, below. “She was totally featherless except for a tuft of white on the crown of her head. This kid had been found in the driveway of a house on a brutally hot day, and they’d fed her tiny little grasshoppers and crickets for two days. When they lifted the lid of the box they’d brought her in, this tiny, helpless itty BITTY baby stuck her head straight up and screamed for food. A good sign, but ….

“She couldn’t defecate. No matter what I did, what changes I made to her diet, she wouldn’t defecate. But at her age, I HAD to keep feeding her or she’d starve to death in a day at most. I gave her warm subcutaneous fluids in the groin area every couple of hours, and finally it worked. One week turned to two, then four …eight… her first set of feathers weren’t good enough to make migration, so I waited for new ones.

“She was in with other scissortails and kingbirds … every one of them as wild as I want them, except for Sophie. Sophie had serious doubts about whether she was really a bird. She’d sit and watch for hours as the other flycatchers swooped back and forth from their perches, grabbing the mealworms and superworms I’d throw into the air. August arrived and I was releasing birds knowing they’d need time to adapt prior to making that long flight across the Gulf of Mexico, headed to South America. “Finally, it was just Sophie left. Her feathers had come in, and she’d wilded up enough that I felt confident she wasn’t an imprint. But oh, how she’d talk to me when I’d go sit with her. Beep-BEEP! So on a bright and sunny early September morning, I opened both doors of my flight cage and stood outside. After a few minutes, she finally realized both doors were wide open, and it dawned on her that she could finally go. I started calling her, patting my knees (much like you’d call a dog, for gawd’s sake), “Sophie! Come on! You can do this! Come on!” She’d fly towards me … do a quick U-turn, back to her perch … then she’d do it all over again. This went on for maybe 15 minutes … and finally, finally she made it through both doors, landing on top of my head, where she let out five sharp BEEPs! and she was off, over the top of my house … and god only knows where. Sophie the Scissortail was the most difficult but the most satisfying bird of the season.”

“Long story made some what short,” wrote Heather Merritt, with Birds in Flight Sanctuary  in Warren, Ohio. “We let a one-eyed Bald Eagle go after a year of battling state officials in Ohio, Pennsylvania, West Virginia, Indiana and Kentucky. Finally my colleague Doty worked her magic in Michigan, and we let him go there. We laugh because we are pretty darn sure he beat us back into Ohio. That was 9 years ago. Two years ago we got a call about an eagle hit by a car. When we arrived we looked and there was our one-eyed eagle, eating a raccoon that had been hit. We pulled up, and he flew off into a tree. We got a million pictures of him sitting in the tree. Last year he came back to our area with a female. They stayed all winter, then left again. I’m looking forward to this winter to see if they come back.

“That kicked off our One-Eyed Project – we fly and test all one-eyed raptors, and it continues to this day.”

“I’ve really been wracking my brain because for me releasing is very traumatic,” said Cara Petricca, with Bluebird Farm Animal Sanctuary  in Cheshire, MA. “It’s like sending a child I birthed out into a horribly scary world. I still think about and worry about so many of the animals I’ve worked with .. I worry about whether they’re safe, whether I prepared them for a life of freedom.. When I release an animal I immediately want to pull them back to me.. Of course there are some that have been so miserable in captivity that I couldn’t wait for them to be gone.”

“I’m with Cara, I find releases stressful,” said Veronica Bowers of Native Songbird Care and Conservation  in Sebastopol, CA. “But lets see … I’d say one of my most memorable releases is that of a Purple Martin, a species of special concern in California. Out here, the PUMAs nest in natural cavities or in the weep holes located in the underside of overpasses. Their population is in serious decline, so their breeding colonies are monitored by biologists. Biologists are trying to get them to adopt nest boxes, but no luck with the CA birds so far.

“Occasionally, youngsters fall from the weep holes. They get too close to the hole and plummet to the ground far below. A biologist, skeptical of wildlife rehabilitation and the potential to successfully rehabilitate these birds for post-release survival/success, brought me some of the “fallout” birds he rescued. I raised them, banded them and released them back to their colony site that summer. The following spring a very excited biologist called me to report that one of our “rehab” martins, a female, had been spotted with a mate at a new colony. (Leg bands for martins are pretty big, so the numbers can be read with a good scope if the bird’s on an open perch.) She returned for two more seasons.”

Maggie Rufo, who works with Veronica at NSCC in Sebastopol, remembers a juvenile Pileated Woodpecker she agreed to release where it had been found in Mendocino. “I volunteered to do the two hour trip because I thought it would be cool to be up close with a pileated (plus when I go to Veronica’s magic bird kingdom she lets me offer mealworms to the Cliff Swallows, who come flying over to me with their mouths open). I picked up the woodpecker and all the way there he pounded on the hard plastic carrier – the whole two hours.

“I was really nervous choosing a spot, but I found one. I set my camera up, then got him out. So gorgeous! He pounded away on my hands. I held him a minute so he could look around, then I slowly opened my hands and after a few seconds he flew off and went right to a tree trunk and started acting like a wild woodpecker. He flew from tree to tree, checking things out, like he’d been there all along. It was so great, and it sealed my admiration for Veronica’s amazing dedication and skill.”

“Maggie,” Veronica added, “you forgot the part where I accidentally locked you in they aviary with the swallows while I went to catch the woodpecker.”

“I must have repressed it,” Maggie replied. “I’ve been locked in a chicken coop once or twice, too. It’s a theme.” “I’ll never forget an orphaned Northern Cardinal nestling that I really fussed over a few years back,” said Arden Zich of Fox Valley Wildlife Center in Elburn, Illinois. “We thought we were done with babies for the season when that little nugget arrived, so he was able to get my full and undivided attention. Discovering that this bird had personality for days was a gift; having to say goodbye was painful and bittersweet. The day following his release (which was into a tree for the evening), I was overjoyed to witness him hop around in the grass, peck at seeds, chase leaves, and zip around the yard in big circles. It seemed very playful, however, he would not fly beyond the fence. My perception is that he didn’t realize he was free to go. After a few hours, he boldly ventured on.

“The cardinal was my spark bird as a little girl, so I’m overwhelmed by the thought that not only did I get to help this beautiful bird get a second chance to live his life, but that he would go on to be admired by others, too.”

“I’m with the stressful group, usually I can’t do releases because I’m too stressed about it,” said Donna Nespoli, of Colorado Native Bird Care and Conservation , “so my hubby does them all. But I did one Brown Pelican release that was memorable. The first thing he did was to greet the flock that was resting on the sand, then he turned right around, took a long bath, and went back to them. It was like they said, “You reek of humans, go wash.”