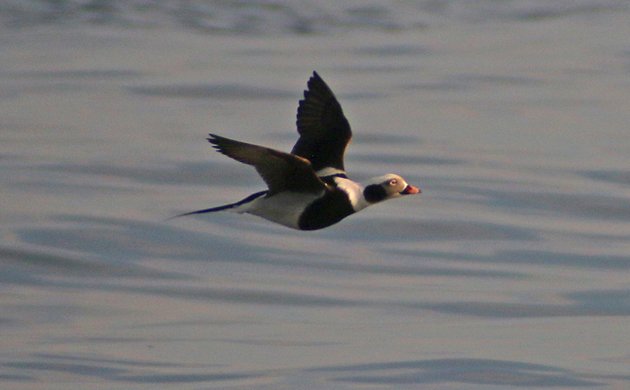 It was almost a month ago that I wondered how many species of ducks, geese, and swans could be found in my home borough of Queens in a single day this winter if I really put forth the effort. I decided that twenty-four would be the likely result, with twenty-seven possible and thirty if everything went amazingly well. I did a dry run with my friend Seth eight days ago, on 18 February, and in our half-day of birding we knocked off twenty-four species and that was with only one scoter species spotted. I had all day Tuesday of last week (20 February) to devote to my project so I went for broke. If I could just find all three scoters, an eider, and a couple good geese I could make it to twenty-nine species! Not only that, but the long-staying Tundra Swan that had been reported at Jamaica Bay for a couple of weeks but that had disappeared was refound on Monday, the day after Seth and I did our run and just in time for my solo effort. Thirty species was within the realm of the possible!

So when Tuesday morning was nice and warm I was thrilled to get out of the house early and out to Breezy Point to begin counting ducks. Unfortunately the warm air and cold water combined to make a heavy fog through which I could see nearly nothing. I gave up the coastal run and decided to head inland with the plan to return to the coast later in the day once the fog burnt off. Despite the short visit and the fog I did see three waterfowl: Greater Scaup, Bufflehead, and Red-breasted Merganser. 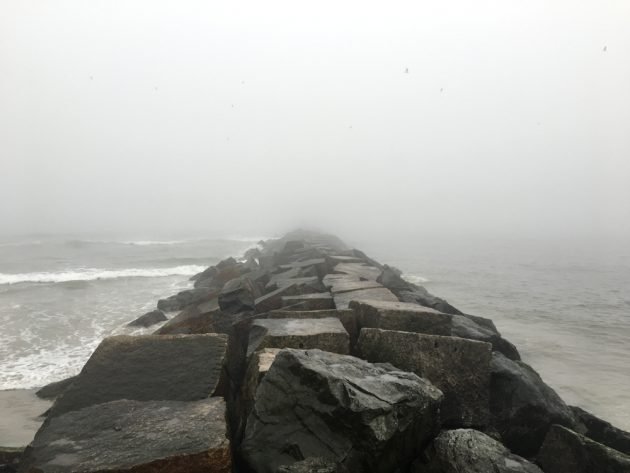 The view in the fog left a little to be desired.

Total for the day after first stop: 3 species

Baisley Pond Park, winter home of Redheads and Ring-necked Ducks, was my next stop. Both of those important target species were present as well as an array of dabbling ducks like American Wigeon, Gadwall, and Mallard. Two Northern Pintails, and two Hooded Mergansers were pleasant surprises as neither is a species seen often at Baisley. I spent a bunch of time scanning through a large flock of Canada Geese as well but there was nothing interesting hiding amid the lawn-mowing horde. 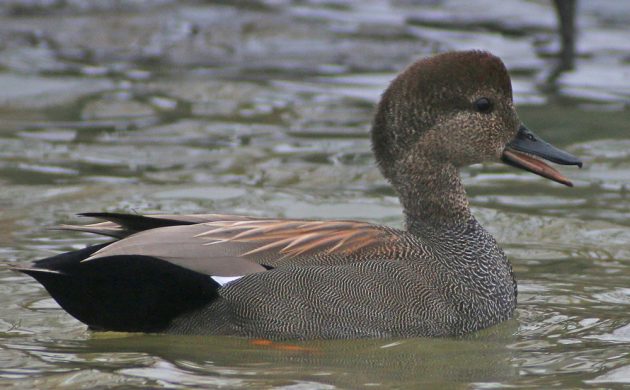 Total for the day after second stop: 14 species

Though I did not expect to find any waterfowl that I would not find elsewhere, I wanted to stop at the Restoration Pond, part of Alley Pond Park, to see if the Red-necked Grebe was still present and because odd waterfowl have been known to show up there. The grebe was still present and I got better looks at it than I had with Seth on Sunday, I added Lesser Scaup and American Black Duck to the day list, and, awesomely, I got a Wilson’s Snipe and a Pine Warbler for the year list. The grebe, the warbler, and the snipe didn’t help me on my record-hunt but a birder’s gonna bird. I was also amused that both Redhead and Ring-necked Duck were present on the Restoration Pond. It’s always good to have a back up plan even if it’s not necessary. A scan through the few geese present did not net me any interesting species.

Total for the day after third stop: 16 species

A quick run over to the World’s Fair Marina where Canvasback flock up in winter, the only reliable spot for the species in Queens, was successful, with forty-seven of the big ducks present. Lots of Bufflehead, scaup of both species, and Red-breasted Mergansers were present but nothing besides Canvasback was new for the list.

Total for the day after fourth stop: 17 species

Willow Lake was next on my itinerary, though I did drive through the rest of Flushing Meadows-Corona Park looking through flocks of Canada Geese on my way. No dice on any rarities though Willow Lake did come through with a single remaining Common Merganser, the last of a flock that at times numbered over forty this winter. The rest seemed to have taken advantage of the warm weather to head north. A single drake Green-winged Teal that had made it through the whole winter was a second new waterfowl for Willow Lake and I was surprised to see another Northern Pintail. Though it wasn’t new for the day it was the first I had ever seen at the location. 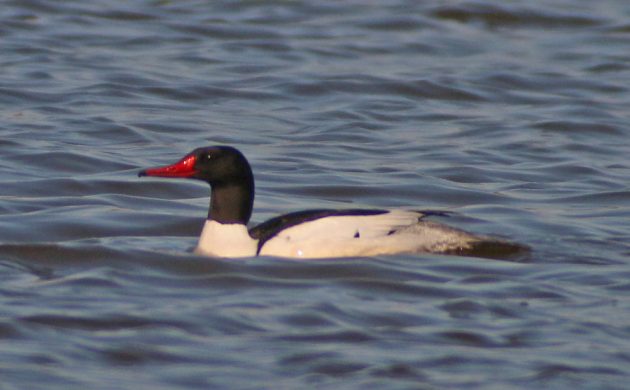 Total for the day after fifth stop: 19 species

After Willow Lake my next stop for the day was Jamaica Bay but first I had to stop and figure out what I still needed to see. I was missing Common Goldeneye, all three scoters, both eiders (though neither are terribly likely on any given day in Queens), Brant, Snow Goose, and Long-tailed Duck. Everything but the scoters and the eiders should be easy and I still had the Tundra Swan to spot. The record should fall easily!

Then I got to the East Pond of Jamaica Bay and scanned for the Tundra Swan. And scanned for the Tundra Swan. And scanned for the Tundra Swan. After my fourth or fifth time through the ten distant Mute Swans on the pond I had to admit that the Tundra Swan was just not present. I did finally pick up Brant and Snow Goose for the day and the large flock of Ruddy Ducks on the East Pond, while not new for the day, were fun to watch. So it was over to the West Pond – by way of Big John’s Pond where I finally got my first look at a Barn Owl for the year – where I scanned through lots of Snow Geese and didn’t find anything but Snow Geese. The area where Common Goldeneye normally hang out on the pond was empty of them so I moved along the path, planning to scan the bay to the north and west where the goldeneye usually go when they are not on the pond. I was so intent on waterfowl that I would have walked right past a Snowy Owl in a tree on the edge of the West Pond had two kind birders not stopped me and pointed it out to me. 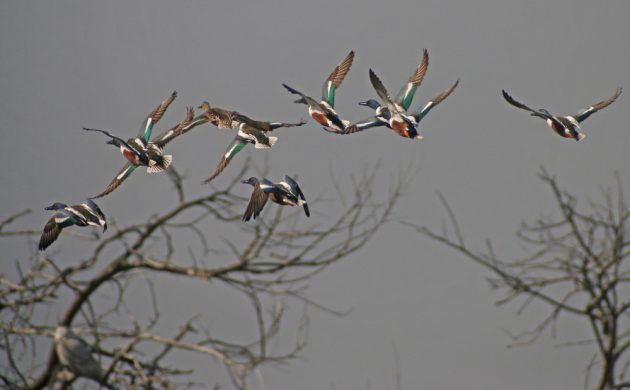 Northern Shovelers with a special guest

But the goldeneyes weren’t visible in the heavy chop that had picked up with the wind. Dejected, I walked back along the south edge of the West Pond, where my spirits were lifted a bit by a Ring-necked Duck, oddly on the pond, and twenty-six more Northern Pintail and eighteen more Green-winged Teal feeding in the marshy east end of the West Pond. Still though, Jamaica Bay disappointed despite netting me my highest number of waterfowl for a single location, mostly because most of the target species were seen earlier, but the missed swan and goldeneye hurt too.

Northern Pintail on the West Pond

Total for the day after sixth stop: 21 species

Off to the Rockaways where a quick scan of the ocean at the Beach 59th Street jetty quickly netted me those elusive Common Goldeneyes and not much else.

Total for the day after seventh stop: 22 species

Then to Jacob Riis Park where I finally added Long-tailed Duck to the day list!

Total for the day after seventh stop: 23 species

A scan of the ocean from a couple of points at Fort Tilden did not get me any scoters or eiders, and they were the first stops that netted me nothing new at all. Bummer.

Total for the day after ninth stop: 23 species

Finally, I was back at Breezy Point. All I needed was one species to tie the record that Seth and I had set in a half-day two days earlier, and two species to break the record. Having not seen a single scoter or eider I was pretty confident. The conditions had improved dramatically with the fog gone and the sun out. 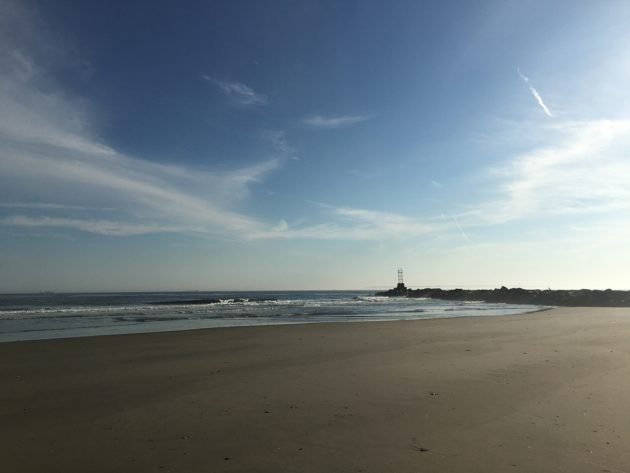 The view at Breezy Point is much better when you can actually see.

Northern Pintail in flight off of Breezy Point

Rather than continue to search for more species I headed home after a long day’s birding. Seventy-two species for the day, twenty-five of them of the type for which I was looking. Not bad for mid-February!

Total for the day after tenth stop: 25 species!

On Wednesday, the day after my record-setting run, the Tundra Swan was seen again at Jamaica Bay. On Friday I birded a bit at Willow Lake and found two Wood Ducks but no Common Mergansers. With slightly better luck I could have found a couple more species on my run but I’m happy about how things ended up. If I do this again it will be in November when more seaducks are on the move and there is a better chance at lingering waterfowl from the fall. Can I (or someone else) beat twenty-five? Only time will tell.

Five Things I Learned While Birding in Hungary

« Previous post
Week four: We wrap up our stay in the US.
Next post »
Best Bird of the Weekend (Last of February 2018)