I guess we can universally agree that the colonial times were a rather selfish period of European history. There is indeed little good that can be ascribed in retrospective to this period, and the little good there is pales in comparison to the bad things. However, one of the little sweet candies Germany still enjoys today from its own disastrous colonial past is the Common Guillemot, or Common Murre.
Germany has only one high seas island it calls its own, the mighty (from a birding perspective) island of Heligoland. Heligoland is actually a small archipelago (comprising of 2 islands with a total area of 1.7 km²) in the German Bight, approximately 70 km off the coast of Germany. This location out at sea not only makes Heligoland one of Europe’s best vagrant traps for Siberian songbirds, its cliffs also hold Germany’s only seabird colonies, with gannets, fulmars, and – yes – alcids, namely razorbills and common guillemots. However, these breeding colonies were not always German breeding colonies. Denmark frequently held posession of the islands from the middle ages to the 18th century. Then the islands’ masters frequently switched between Denmark and the Duchy of Schleswig (which would much later be part of Germany) until it was captured once and for all by Denmark in 1740. Well, “for all” lasted until 1807 when Heligoland capitulated to the British during the Napoleonic Wars. Surely the British cared little for the seabirds as they had and still have plenty of their own. This may explain why in 1890, they gave Heligoland away to the relatively young country Germany (formed in 1871) in a deal known as the Heligoland – Zanzibar Treaty. In this treaty, the Germans ceded control over some of their colonial territories in East Africa to the British in return for the Caprivi Strip (now Namibia) and, surprise, the island of Heligoland. This relatively recent affiliation to Germany even survived the Second World War and the – arguably understandable – attempt in 1947 by the British to destroy the main island with 6,700 tons of explosives in one of the biggest non-nuclear detonations the world has ever seen. The cliffs survived along with the rest of the island and are still manned by endless rows of Common Guillemots during the breeding season, offering German birders an easy way – the only easy way – of enjoying this iconic species.
Of course Guillemots can also be seen away from Heligoland on both coasts of Germany, the North Sea and Baltic Sea, but as with other species of alcids and other areas of coast, this requires searching far out at sea from shore with a scope, and settling for tiny black-and-white dots that dart just above the waves in the typical alcid whirlwind of wing beats. It was thus with a mighty amount of surprise and happiness that I found a Common Guillemot swimming in a deep-water channel just off the northern beach of Germany’s island Sylt in late December 2016 – only my second-ever satisfying sighting in Germany as I have yet to visit Heligoland. The bird negotiated the waters just 15 metres off the beach, where waves with small amplitude yet high frequency were the result of high winds and very strong currents around a veritable maelstrom that was formed by the receeding tide flowing around the tip of a sandbar. This made photography a challenge but was a charming reminder of the German name for the bird: Trottellumme, or Gawky (dopey, foolish) Guillemot. 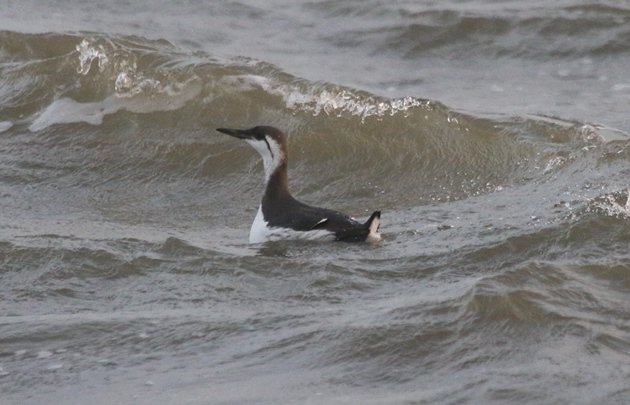 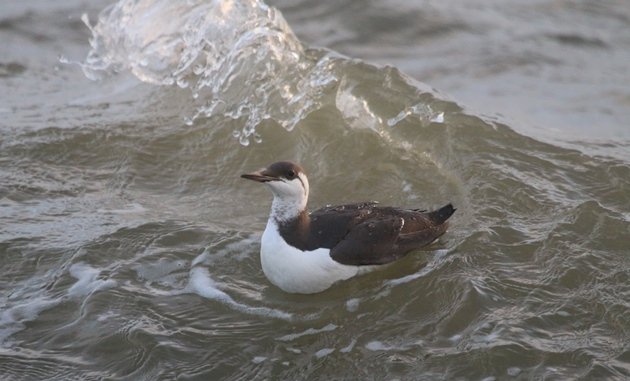 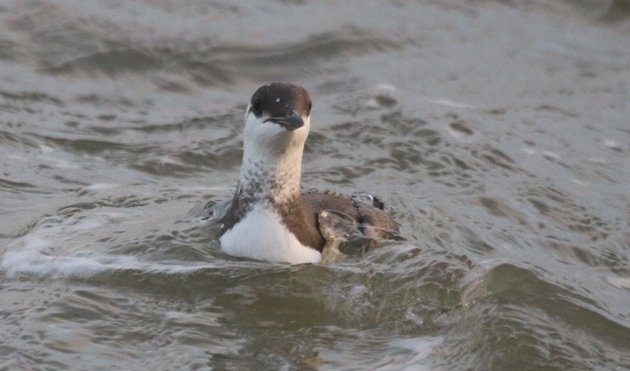 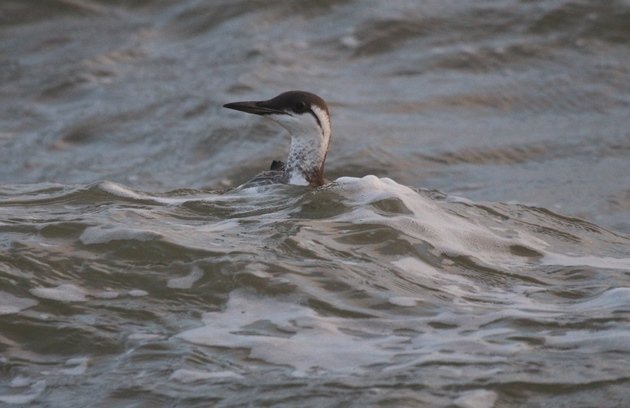 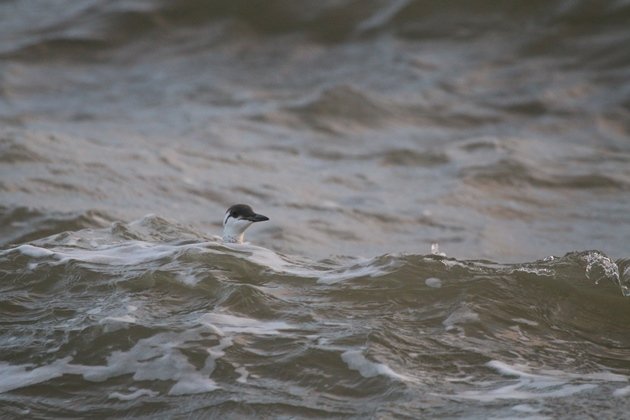 The origin of the German word Lumme (guillemot or murre in English) lies in the old Nordic word “lom” and is likely onomatopoeic. But what is it about the species that makes the Germans think it is a bit dim-witted? Honestly, breeding on tiny ledges high up in cliffs doesn’t help in conveying a common-sense approach to life and reproduction, no matter what the pressure by predators. Especially so when you are barely able to fly. And having you young ones jump off those cliffs onto boulder slopes to meet their parents beyond the surf? Spending the winter far out at sea in the Arctic when you are a bird barely larger than a feral pigeon? Diving in murky waters infested with corkscrew killers? Yes, yes, those would all be justified reasons for being labelled in such a manner. But these insanities aren’t unique to the Common Guillemot, yet Germans consider the other alcid species to be non-stupid. The secret to them being mocked with such a name is in their gait: in contrast to the Razorbill, which is the only other species of alcid commonly seen on land by German-speakers, the Common Guillemot does not walk on its toes (or feet as birders would call it). Instead, it walks on what we would describe as its knees, stretching its tarsus and feet forward. Which is just an awkward thing to do in general and particularly so on narrow rock ledges high up vertical cliffs. An alternative theory is that the Germans stole the term Trottellumme from the French, where it is called Guillemot de Troïl. However, that explanation isn’t nearly half as funny and also, this would suggest that Germans referred to the species as Trottelguillemot, not Trottellumme. And finally, the French word “Troïl” does not seem to exist outside the species’ French name and I am pretty sure many a French birder will tell you that Troïl was stolen from the German word “Trottel”. So there you go, and I’ll stick with the gait thing, especially as it once again proves the superiority of German bird names over the rather straight-forward English ones. And yes, that’s a challenge to prove me wrong in the comments below. But beware, you’ll likely go under like a guillemot: 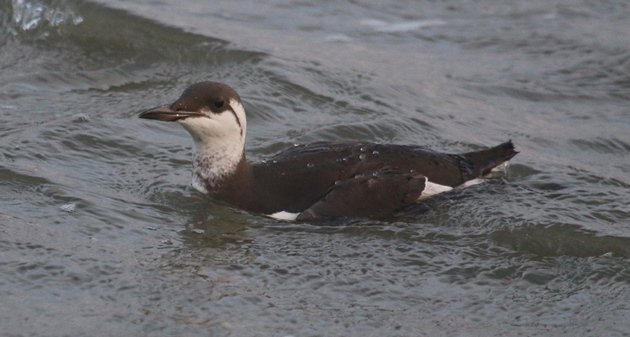 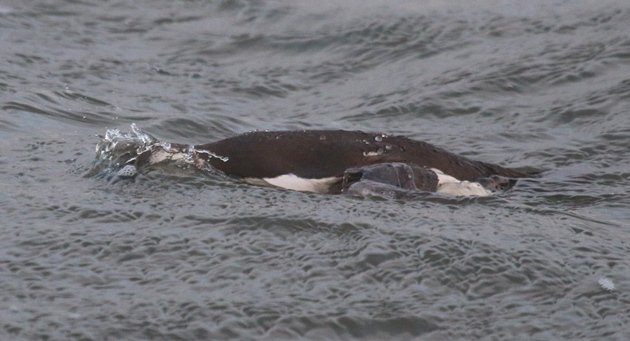 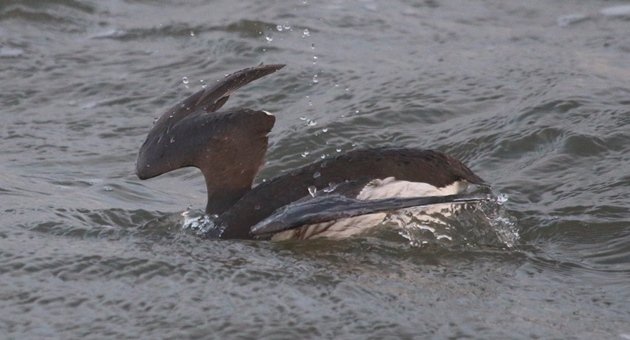 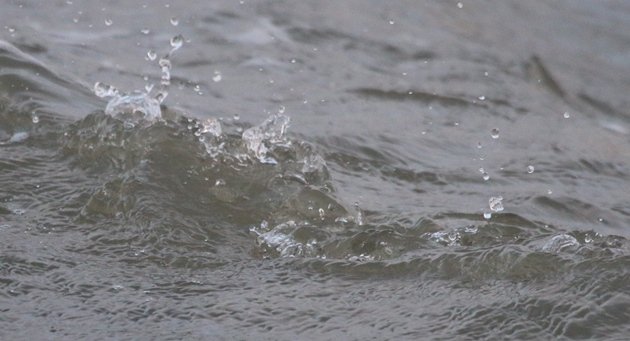