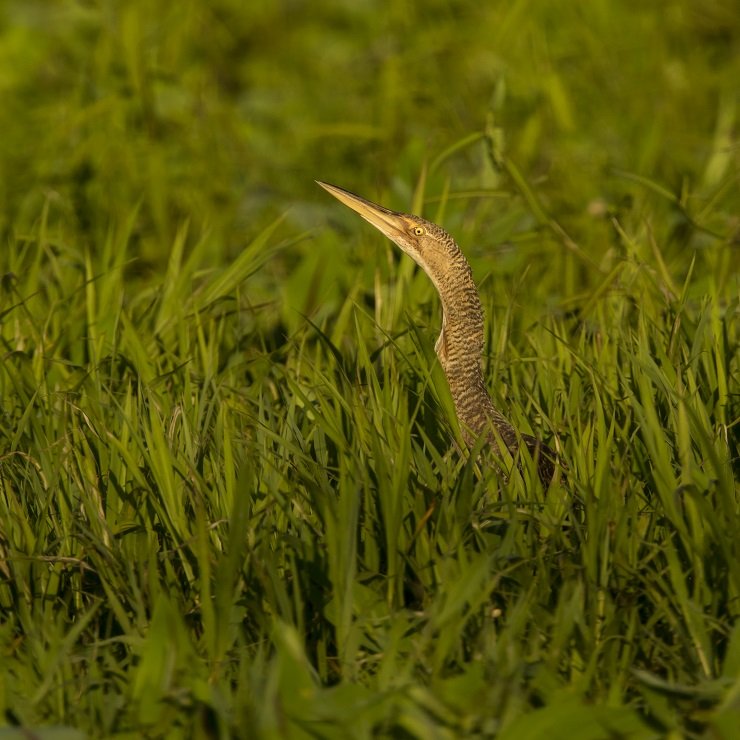 Continuing here with the series on threes within the avian landscape of Trinidad and Tobago (in case you missed it, T&T has three each of trogons, antshrikes, spinetails, manakins, hermits, honeycreepers, and resident warblers) we arrive at one of the more difficult species triads to encounter. Like the three resident warblers in T&T, the three species of bitterns recorded for T&T are only found on the larger island of Trinidad.

The largest and by far the easiest (an extremely relative descriptor) to see is the hulking Pinnated Bittern. In the breeding season their booming calls echo over the marshlands across Trinidad. I was lucky enough to witness a portion of a courtship ritual in the sliver of time between sunset and the onset of thousands of mosquitoes. Read more about that here.

Medium-sized and recalling a slim-built Striated Heron at first glance, the Stripe-backed Bittern is an ornately plumaged bird. In its brief courtship period, its lores flash bright red and it truly lives up to its name with white-fringed dark plumes sprouting out its mantle.

The smallest of the three is also the smallest member of the heron family – the aptly named Least Bittern. Personally, this is my nemesis bittern as I’ve only seen an adult briefly in flight. I did spend considerable time with this confiding juvenile many years ago.

How do you fancy your chances of nailing these three on a birding trip to T&T?

Sell your House with Birds!