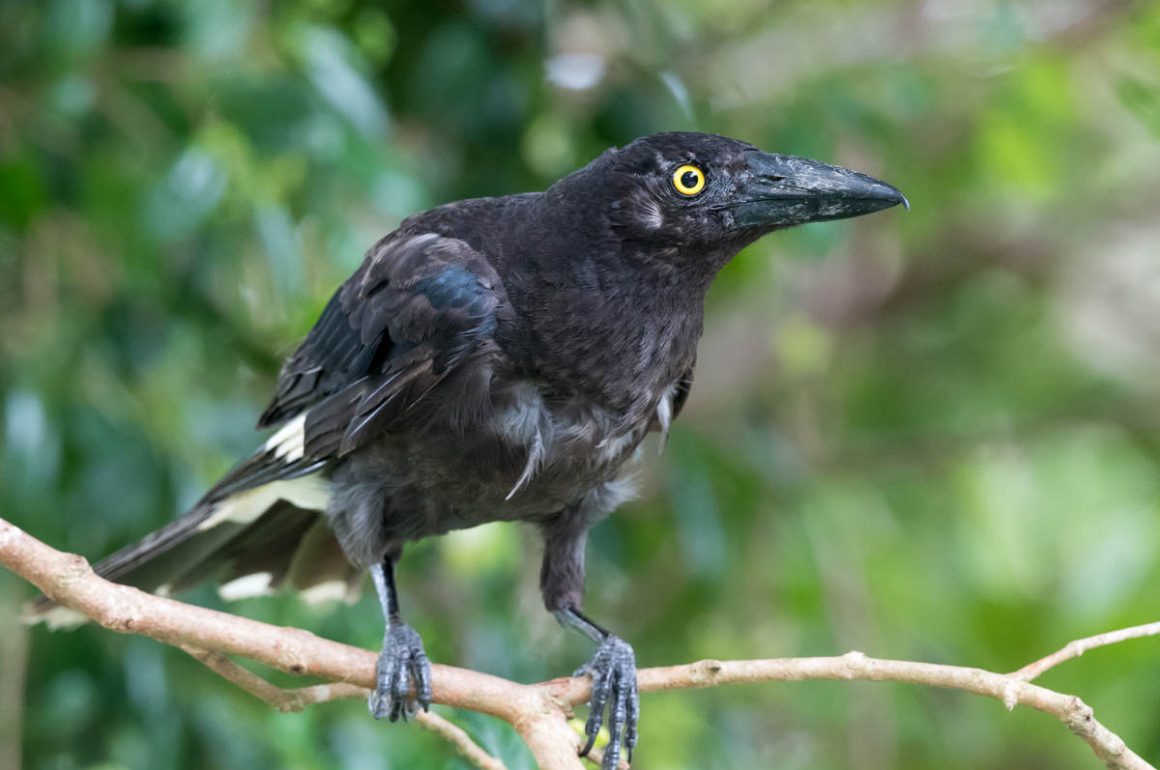 “A reading of recent research shows that Australian birds are more likely than most to eat sweet foods, live in complex societies, lead long lives, attack other birds, and be intelligent and loud.” (Tim Low, “Where Song Began”).

While this may sound attractive at first, it also covers highly immoral behavior. For example, in one study, it was found that more than 80 percent of the fledgling Australian Magpies born in a territory one year were sired by males from outside its borders.

Another study in which researchers tried to track Australian Magpies had to be modified because the magpies involved helped each other to remove their tracking devices within an hour. I guess if you want to have affairs without too much trouble from your social partner, it helps to be intelligent.

When going to Australia, one of the two birds I wanted to see most was the Tawny Frogmouth.

Gisela Kaplan has written a book about the species, and how they seem unperturbed by humans: “It’s one of their most successful defense strategies. They just sit and pretend not to be there to avoid interaction.” I sometimes try this at parties, and indeed it usually works quite well.

It seems that quite a few zoos keep Tawny Frogmouths. When these birds breed, this can lead to highly cringeworthy announcements, for example from Adelaide Zoo: “We have egg-citing news!”

Clare has also written posts on Tawny Frogmouths in Broome for 10,000 Birds.

Scientific research has found that these ducks get together more closely if you feed them with bread. In the language of real scientists, this sounds as follows:

“Although the mean distance between naturally foraging individuals was 2.51 m, individuals feeding on bread were only 0.25 m apart. This study suggests that the common pastime of supplementary feeding of ducks has resulted in new foraging behaviours and patterns within urban populations of Pacific Black Ducks, and these findings have implications for urban wildlife management and the
co-existence of people and animals in urban environments.”

The Australasian Swamphen used to think of itself as a subspecies of the Purple Swamphen but then started a self-improvement program and ended up as a full species. It is also grateful not to have quite as dumb a name as the Grey-headed Swamphen.

The Willie Wagtail is not really a wagtail but rather a fantail. So, one part of its name is plainly wrong while the other part is just silly.

Apparently, Willie Wagtails are associated with lots of Aboriginal myths – some of them are described here. I heard that some Willie Wagtails were almost afraid of doing anything at all whenever Aborigines were around, for fear of promoting some kind of superstition or other.

It makes me wonder a bit why we seem to be more tolerant of superstition in underprivileged minorities. I guess in a way it is quite patronizing to have that attitude.

There is an interesting study covered in an article titled “Willie Wagtails: The Werewolves of the Bird World” which at first glance might also seem to be catering to some superstition but which really analyzes potential reasons for males of this species sometimes singing at night.

Of course, if science is not for you, you can also look for the Spiritual Meaning of Willie Wagtail (“Unlock the amazing secrets of this spiritual symbol”) here. Just please do not return to this website afterward.

“The wing length of Ringneck Parrots in the southwest of Western Australia has been increasing since the 1970s, coinciding with that region becoming hotter and drier … There is the possibility that the birds’ wings are an evolutionary response to the hotter conditions, and help the parrots cool down.”

Of course, as a certified cat person, I was delighted to see a Green Catbird near Brisbane. When I publicly present bird photos, I sometimes play the call of the bird and ask what they think it is. The answer is not always correct, but I think the name “Green Strangling-an-Infant-Child-Bird” might not be that good for the image of the species (and it would be a bit long, too).

I am not much of a devil worshipper myself, mostly because I am a Sagittarius, and it is well known that people of this star sign do not believe in the devil. Unfortunately, this also means I rarely get to meet this rather cute little Yellow-throated Scrubwren which according to M. Morcombe (Birds of Australia) is also known as ‘Devil-bird’ because it is always found in the darkest parts of the rainforest.

Of course, when speaking of the devil, it is hard for me not to mention the song “The best ever death metal band from Denton” by The Mountain Goats.

In terms of design, the Pied Currawong also seems to be inspired by satan, and I mean this in the best possible way.

Generally, this is not a bird getting a lot of good press.

Ornithologist Colin Harrison describes the pied currawong as having “the slightly furtive but alert air of a bird about to commit a crime.” (source)

And in a fairly comprehensive search by Dr Julie O’Connor, she could only find one source mentioning the Pied Currawong in a positive light – and that is as Roasted Currawong (which apparently tastes well together with mushrooms).

I like them a lot, though. If I ever have a used car I need to sell, I will definitely ask for their help.

Dr. O’Connor also gives a rather specific rationale why Pied Currawongs are not that liked by Australians: “For example, a delightful Superb Fairy-wren seems a lot more lovable than the pied currawong who snatches the wren from its nest, tears it apart then feeds it to its own young.”

On the other hand, Superb Fairy-wrens (similar to the magpies mentioned earlier) are also extremely promiscuous. If I was so inclined, I might think that they deserve to be killed by Pied Currawongs for their sinful behavior.

“These birds are notorious for their polyamorous approach to sex, despite being socially monogamous. Breeding pairs form exclusive social bonds, yet each partner will still mate with other individuals.” (source)

Another website claims that “the male Superb Fairy-wrens …[have] been dubbed the least faithful birds in the world owing to their rampant promiscuity. Female birds have been observed being courted by 13 males in a half-hour period.”

However, the females prefer exactly those males which are blue for the longest time. Kind of irresponsible to support this type of behavior, I think (source). This is what killed James Dean.

The Latin species name of the Leaden Flycatcher is rubecola (“red-breasted”), one of the relatively few examples of a species named after a characteristic only shown by the female (the males do not have anything reddish on them).

As a kind of compensation, the English name “Leaden” refers to the color of the male – though in good light, the male is beautifully blue rather than dull gray (as suggested by the word “leaden).

Investment by male and female parents was found to be very similar at all stages of nesting (source), though the photo below may suggest otherwise.

The Black-faced Monarch is a relative in the same bird family, the Monarchidae.

Sulphur-crested Cockatoos have learned to open trash bins in the Sydney area, looking for food. They might want to look for a better press representation though, as the related NYT article is titled “Trash Parrots Invent New Skill in Australian Suburbs“, which is kind of a mixed message.

Of course, posing on youtube with dance moves does not help the species’ reputation either.

Nor does their occasional destructive behavior – they damage buildings and once did AUS$50,000 worth of damage to the roof of the National Herbarium of New South Wales (source).

John Martin, a researcher of the Big City Bird project, states that “It could just be they’ve got a bad attitude,” and gives boredom or playfulness as additional reasons before pointing out only some individuals are guilty of this behavior.

They are quite long-lived, with a verified age of 57 and even longer lifespans reported anecdotally (source).

The Masked Lapwing has its own small brochure edited by the Australian Transport Safety Bureau as it apparently is a risk at airports – the species likes short grass and defends its territory aggressively, possibly even against large aircraft. Between 1991 and 2001, 143 bird strikes involving Masked Lapwings were reported to the ATSB.

I am not sure whether its aggressive behavior or their face (that to me resembles the headgear of ancient hoplite soldiers) is responsible for their Latin species name miles (soldier).

Lewin’s Honeyeater is named after John Lewin, a British illustrator who after traveling to Australia in 1800 authored the first illustrated book to be engraved and printed in Australia. His Wikipedia has a few tragicomical bits:

“The resulting books were intended to fund his passage home [to the UK], but the fashion for Australian natural wonders was already fading by the time he published [them]”

“Only six copies of his next book … have survived, which suggests that the remaining copies were somehow lost”.

It is certainly not true that writing a post about Australia and not mentioning flying foxes is illegal, but why take the risk? 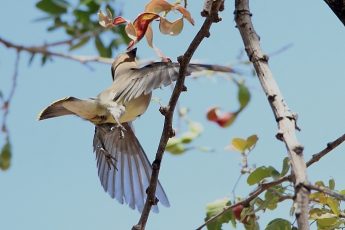 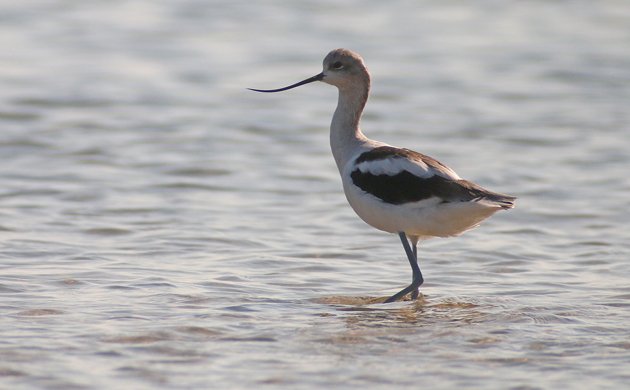 Best Bird of the Weekend (Second of August 2014)

« Previous post
Dreaming of Congo rainforest: Gabon, Republic of the Congo and the Central African Republic
Next post »
A flock of Spoonbills