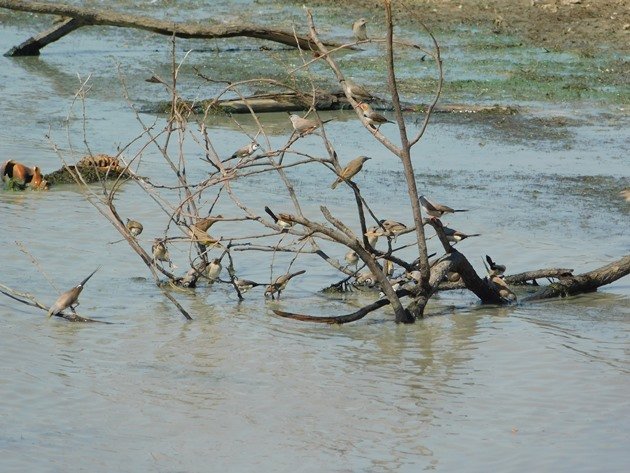 As I have mentioned in the past we often place branches out for birds. The birds can then access water much more easily and we get the enjoyment of watching them all come in for a drink and bathe. At this time of year around the north of Australia the ephemeral lakes are drying out fast. All of the birdlife in the surrounding area comes to drink and bathe and you can easily observe a wide variety of birds by just sitting and watching.

When we observed the Orange Chat close to Broome recently we also encountered a solitary Chestnut-breasted Mannikin. There were literally hundreds of birds coming in to drink from the branches we had placed for them. We have to move the branches on each visit as the water level drops back and we place it a bit further out each time. The main bird species visiting were Rufous-throated Honeyeaters, Zebra Finch, Long-tailed Finch and Double-barred Finch.

Finches tend to move in large flocks as they follow the food and water. All of a sudden there was one solitary Chestnut-breasted Mannikin in for a drink. It dropped down onto the branch and drank. The photos below were all taken over less than one minute. The birds do not stay long at the water and rely on safety in numbers. There does appear to be some respect from other bird species that may normally be a threat when they are all hot and thirsty, though.

Chestnut-breasted Mannikin and friends in for a drink

We have encountered really good flocks of Chestnut-breasted Mannikins further north in Western Australia and also in the Northern Territory. They were good at concealing themselves amongst the bamboo. Pictorella Mannikins have also shown up in Broome in the past, but not recently. Maybe they will be the next species to be observed as we patiently wait for our wet season to start. 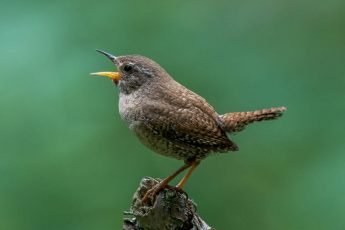 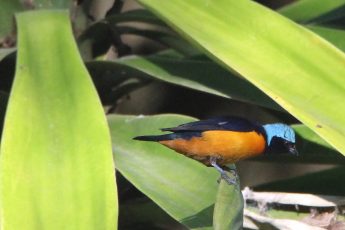 Back to the Canyon

Why Are Birders Bibliophiles?