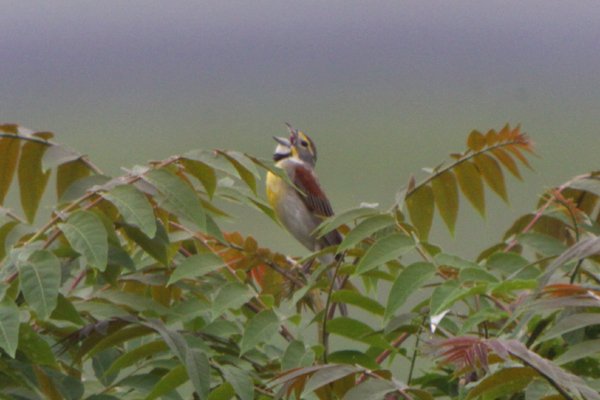 When you hear the word “biofuel,” you probably think of corn, right? But other types of plant matter can power our vehicles and our homes. And some of those options may be more beneficial to birds than are acres and acres of cornfields.

That’s the gist of a new study published in PLOS ONE. In it, researchers from Wisconsin compared cornfields with grasslands in terms of which provided better bird habitat. The results suggest that grasslands, often populated by diverse species of grass as well as wildflowers, tend to support more varieties of birds, including declining species like Dickcissels. (That Dickcissel you see atop this post was not photographed in the Badger State, but rather by Corey in Orange County, NY.)

Basically, the scientists logged the types of vegetation growing at each site, computed how much biomass (the raw materials of biofuel) could be had from it, and tracked the numbers and species of nesting birds. At the study’s end, grasslands looked superior to cornfields for supporting birds, and mixed-vegetation grasslands did better than fields dominated by one kind of grass. Further, researchers noted that bird diversity and density amped up when grasslands were surrounded by other grasslands.

The upshot? Grasslands might be a good source of biofuel that’s also easy on the avians. Which means that alternative energy just got a whole lot birdier.

San Franciscans Being Assaulted By Birds