I haven’t been birding yet in 2013. Oh, I’ve gotten my first bird of the year (European Starling – yay?) and a handful more (Rock Pigeon, House Sparrow, and my first native bird, White-Throated Sparrow), but for the most part I’ve been sticking to indoor pursuits here in chilly New York City.

One of those indoor pursuits was movie-going; specifically, on Tuesday I saw West of Memphis. A full review of that film would be far outside the scope of this blog, but the use of birds, while very minor, got me thinking and I haven’t shaken the thinking yet, so now I will think aloud (well, in print) at you, my loyal readers.

There are three bird shots that stood out in my memory. Two were paired classics — shots of migrating Snow Geese. Before the main characters were released from prison, the geese were high overhead, inaccessible white spots against blue skies (so distant and out of focus, in fact, that I first misidentified them as Northern Gannets.) At the close of the film, with our heroes free men and moving on with their lives, the geese are on the ground, real birds, but in the process of taking off for a great migration to the tune of a stirring Eddie Vedder song. This is good film-making – symbolism anyone can understand, but subtle enough that it only becomes obvious in retrospect, in light of the second shot and the context of the entire film, what the first shot really meant.

It’s the third shot that intrigues me most, though. At Varner Unit, home of Arkansas’s death row for men, we see a typical sight – a stark shot of a chain link fence. But in one of the gaps of the fence, a House Sparrow perches, stretching briefly.

The House Sparrow, of course, is laden with all sorts of symbolism. The Bible cites sparrows, in general, as humble and scant – their fall attended by Yahweh precisely because this indicates the vast scope of attention available to an infinite being. House Sparrows particularly, in the U.S., are widely regarded even by non-birders as dirt birds — aggressive, troublesome, ugly, undesirable. I can’t help but wonder how much the filmmaker knew about these creatures when she set up the shot — for the attributes I just listed map very well to the attitudes that the police and prosecutors held towards the teens they falsely accused in a triple homicide all those years ago. The three convicted men were self-described poor white trash, variously high school dropouts, mentally handicapped, psychologically troubled, and interested in the standard 80’s trappings of the heavy-metal occult. Only the rise of an era where technology is virtually an omniscient god in itself allowed the confluence of resources and information that ultimately freed the three — big names in media, forensics, and the law bending their attention towards this particular case, keeping it in the public eye whether in print or on the internet, in film and on billboards, and maintaining the pressure that ultimately took the case to the Arkansas Supreme Court. At one point, a voice-over describes the case as the first crowd-sourced exoneration.

Whether this metaphor is exciting or disturbing probably depends on the kind of science fiction you read, but my point, ultimately, is this: the more you know about House Sparrows, the more on point the shot appears. This, to me, is the perfect meeting of what C. P. Snow describes as the two cultures — science and art creating a resonance that adds layers of meaning to the finished product. Even if it was ultimately an accident — if Amy Berg spotted a bird on a fence and pointed a camera at it knowing nothing more — it works so well that I really don’t care. Makes me feel a little better about that tiny year list, too. (As an aside, for those interested in herps, the film also contains a not-to-be-missed scene in which a man allows himself to be bitten by a snapping turtle as part of a forensics demonstration.)

How Fast Can A Roadrunner Run? 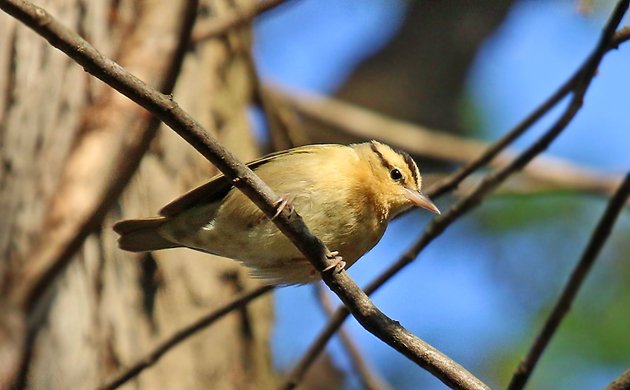